A poem about O’Farrell and her role in the surrender 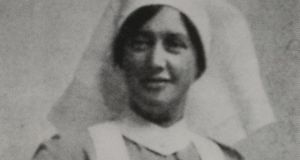 This poem was commissioned by the Irish Writers Centre as part of the 1916 centenary celebrations. Tomorrow’s poem, The Fallen, is by Thomas McCarthy and celebrates the Garden of Remembrance

WE CARRIED IT TO HERE AS BEST WE COULD

“Miss, did you hear that, Miss,what Commandant Connolly said?”
A boy, oblivious to the leg wound I am binding.
“When we were coming down Abbey Street only yesterday,
William O’Brien said, where are we going Jim and,
and the Commandant’s answer, we are going to be slaughtered.
What do you think, Miss, is that the right of it, would you say?”
His eyes are away, caught by the crash of rifles, of glass
sparkling inward from the explosion – he would not hear me
if I answered, having just discovered that all of this
is actually happening, and to him, here and now.

The women bring tea in a bucket, brisk and efficient,
smoke-bothered, filthy and cheerful. Dead men piled to the side,
we try not to look at them, or to breathe when we go near;
the wounded we draw deeper inside, we do what we can
to ease their pain. Beside me, an old volunteer reloads
– perhaps with bullets I smuggled in. He stands, takes aim, fires –
a figure drops outside Clerys, spasms and flattens out.
The flames are struggling to take hold upstairs. The noise, the roar,
I had not expected the noise, the stink, the filth of it –
blood, cordite, the toilets blocked, black plaster dust everywhere.

Connolly beckoning to Pearse, their bare heads together.
A smouldering beam thuds down behind them, flames lick the air.
Break out. Through Moore Street. Send out the women under a flag.
Crowbar and pickaxe work, save what we can . . . We won’tsave you,
I think. Keep my counsel. The long retreat inside ourselves
has begun. Thunder outside as another building falls,
the guns walking their hell steadily towards us. Fire is their
answer to our stubborn persistence; they could starve us out
if they wished, but some demon drives them, they want we should burn
for the sin of pride, rebels against their divine order.

“ . . . to prevent further slaughter . . . ” The words are agreed, scrawled out
by lamplight. This morning we watched a father and his child,
waving a soiled bedsheet, gunned down as they ran from shelter.
“They will not fire on a woman” – I mean to remember
the man who said that, one of the few poor innocents left.
Gathered all that I had been until now, my time on earth,
stood, smoothed my skirts, pinned up my hair. Pearse, by the stretcher,
sought my eyes: “Now, Liz, be of good heart. This is not defeat,
we’ve made a good beginning now, we’ve carried it to here.”
I bowed my head, I would not weep. The walls, the roof, crashed in.

Dead bodies in doorways, on the streets,this I remember,
the stench, quick swarming flies . . . and not just soldiers – volunteers,
yes, but ordinary men and women, and children too,
my god the children! I was too horrified to feel fear
but I walked on, a cold prickling like electricity
on my skin, walked under the guns, seeing madness in some eyes.
I felt strange to myself, pushed out onto a nightmare stage,
but rage steadied me when some aide threatened to shoot me.
His superior grim, unbending, severe in his terms.
I drew on my own cold reserves, I made him give his word.

I caught the flash of sunlight on lens, saw the camera raised –
and time slowed. I made quick calculation: the General
facing Pearse crisp and commanding, our own man upright but
wearied by cares, flanked by a nurse, saw what would come of this,
to what purpose it could be put . . . I stepped to one side, stood
out of the record - for the dignity of our cause, yes,
and for a second reason, one that came suddenly clear:
I knew we would fight on, would rise from this burning carnage,
I saw no reason the enemy should have my image:
I held myself out of their history, to make my own.

On April 29th, 1916, British brigadier general WHM Lowe accepted the unconditional surrender of Pearse. The moment was captured in a photograph. The meeting between Lowe and Pearse had been arranged by nurse and Cumann na mBan member Elizabeth O’Farrell.