Between Them review: A new work from one of the finest writers of our times 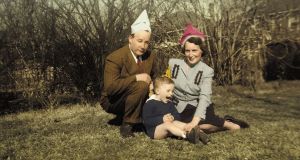 Richard Ford as a child with his parents, Parker and Edna. Photograph: courtesy of Richard Ford

Book Title:
Between Them

Time and again in his novels and short stories Mississippi-born Richard Ford has expressed intense, often profound emotions through wry humour in prose of daunting elegance – always with a natural ease which simply has to be experienced. He is an observer blessed with curiosity and an ability to convey what it is to be alive as well as to feel, to remember, often to fail and, frequently, to regret. There is no sentimentality, only a civilised, almost intimidating candour.

Since the 1986 publication of The Sportswriter, which marked the introduction of the great American Everyman, Frank Bascombe, a bereaved father and divorced husband still hoping to make sense of life, Ford has consistently proved to be not only a great writer, but also the voice of contemporary (if pre-Trumpian) America: funny, human, sad and real. There is a jaunty, insightful wisdom about Ford’s work. It is witty and wry, replete with ironic sighs. He misses very little about his fellow man, always detecting the faults yet never ignoring the vulnerability.

The big books that followed The Sportswriter, Independence Day (1995) and The Lay of the Land (2006), continued the story of Bascombe while adroitly chronicling the chaotic evolution of his country. Most readers will agree that by 2012 with Canada, a haunting miracle of a novel about a man’s damaged life, it was becoming difficult to arrive at a new set of superlatives for Ford. Yet in many ways the art had long been obvious, its roots apparent in his beautiful short work, Wildlife.

Aside from the stories in his collection Rock Springs, one of the finest testaments to the grandeur of the American short story, Wildlife inhabits a special place. It is a heartbreaking elegy in which a narrator recalls his father, a tragic dreamer, and his unhappy mother, whose loneliness causes her to seek comfort elsewhere.

To be a son

Passages from Wildlife define not only what it is to be a child – many writers have done that – but far more specifically, what it is to be a son. Ford cuts close, almost too close. “In the fall of 1960, when I was 16 and my father was for a time not working, my mother met a man named Warren Miller and fell in love with him.” Ford leaves the reader unable to avoid wondering about those strangers, our parents, who were people before they ever became fathers and mothers.

The title refers to the role Ford felt he played, an expected only child born 15 years into a marriage of two people who had been content with each other

So it is clear that for all the bravado and detached vision of the big novels – and they are big in the sense of being generous and expansive as Bascombe likes to take his time – Ford, who is astute on the state of the union, is also incomparable on the state of the heart.

Even so, the devastating pathos of Between Them, his beautiful tribute to his parents in the form of two calm, deliberate and reflective essays written 30 years apart, is unusually affecting. The title refers to the role Ford felt he played, an expected only child born 15 years into a marriage of two people who had been content with each other.

Ford’s father had been a travelling salesman, covering several southern states, spreading the good word about starch. His wife, lively and outgoing, had travelled with him. In the beginning, they carried on as before, but with baby Richard in tow. But then it became impractical. So Edna Akin, a fatherless girl from Arkansas, found herself alone with her child from Monday morning until Friday evenings when her husband returned, bringing food with him like a soldier returning from the war.

Except that Parker Ford, also from Arkansas, the youngest of three sons, whose mother was from Co Cavan and whose father had killed himself in despair of losing the family farm in a bad investment, had a weak heart. For him there was no war.

Life on the road

The portrait which takes shape is of a large, gentle man with a weight problem and no hobbies. Ford wonders about his father’s life on the road. “And how was it for him? Driving, driving alone? Sitting in those hotel rooms, in lobbies, reading a strange newspaper in the poor lamplight; taking a walk down a street in the evening, smoking? Eating supper with some man he knew off the road?”

Ford summons an ordinary man, his father, who was to suffer his first heart attack when he was 43. Four-year-old Richard went to the hospital with his mother to visit his father, who was sitting under a big, clear tent – “strangely smiling out at me through the plastic, as if this was a very funny situation to find yourself in.” Together they went to some ball games. Parker was to see his son in action and tell him to do better. “He called me ‘son’. I called him ‘Daddy’.” Almost casually he adds: “He would not have thought that 70 years later I cannot remember the sound of his voice, but long to.”

A second heart attack, 12 years later, killed him. Parker Ford died in the arms of his barely awake 16-year-old son, while Richard's mother stood by, incredulous. Her world had ended.

Mother and son continued, with Edna telling Richard he would have to strive. She went out to work, this woman who had once been told by her flighty mother that she was to pretend to be a sister, not a daughter. Ford’s mother spent the remaining 21 years of her life in an aftermath. She often visited her son and his wife, yet remained alone.

“The fact that lives and deaths often go unnoticed has specifically inspired this small book about my parents,” writes Ford in an afterword. His memoir to his mother is loving and leaves no doubt as to their shared affection. Yet in the tribute to his father, a country man who dreamed of living in the suburbs – and for a while did – Richard Ford, long married and without children, emerges and remains as a son. As a son he learned early in life to watch the reactions of adults and it certainly made him a writer, one of the finest of our time.

Eileen Battersby is literary correspondent. She will read from Teethmarks on My Tongue in Over the Edge at Galway City Library, on Thursday May 26th, at 6.30pm