Review: On the Abolition of All Political Parties, by Simone Weil

In an era of disillusionment with political parties, the republication of the French philosopher’s forceful treatise on abolishing them couldn’t be better timed 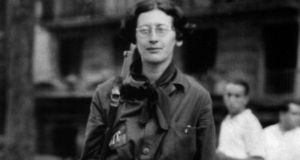 Book Title:
On the Abolition of All Political Parties

In our political lexicon, extremist is not a good word: it denotes someone uncompromising and possibly self-sacrificing. But, then again, saints might be called extremists of sorts. The French philosopher Simone Weil, who has often been called a saint among intellectuals, was always willing to sacrifice for a political cause. Despite being physically frail she toiled at a Renault assembly line in order to share the fate of the workers (although she was eventually fired, as she could not keep up); she lived in unheated flats and gave her money to the poor; and she volunteered on the side of the soldiers fighting Franco’s fascists in Spain (but had to be evacuated after stepping in a pot of boiling oil). During the second World War she worked for Gen de Gaulle’s Free French in London. But she also starved herself, refusing to eat more than what she (wrongly) thought to be the ration of her compatriots in Nazi-occupied France.

Eventually she died in a sanatorium, in Kent, aged 34. Among her London writings had been a memorandum that demanded the abolition of all political parties in postwar French democracy. De Gaulle had called some of her proposals mad, but, mad or not, Weil’s cogently argued reflections force us to rethink why we take it for granted that democracy must come with political parties, even if, today, parties are less popular than ever.

It is easy to see why the publishing house of the premier American literary magazine, the New York Review of Books, would choose just now to bring out Weil’s memorandum as an elegant little book. The US Congress is more polarised than ever, although the term polarisation, while widely used in the American media, is misleading: the Democrats have remained in a place that in Europe might well be described as centre-right; it’s the Republicans who have moved sharply rightward and cannot afford to compromise, lest their representatives be challenged by Tea Party purists. However, Weil was not an advocate of compromise, or what in the US would be called bipartisanship, which means, in effect, that the extreme right is willing to do a deal with the centre-right. She wanted to get rid of partisanship altogether.

Weil said that parties were organisations “designed for the purpose of killing in all souls the sense of truth and justice”. They inflamed what she called “collective passions” and made it impossible for party members to think for themselves. She complained that they never spoke their own mind but prefaced whatever they might contribute to political discussions with statements such as “I, as a socialist . . .” Weil concluded that “if one were to entrust the organisation of public life to the devil, he could not invent a more clever device”.

Weil was born into a Jewish family but violently rejected Judaism and eventually turned to Catholicism. Yet she chose to remain on the threshold of the church, attending Mass, spending many hours talking to priests, but hesitating to be baptised. Part of her reluctance had to do with her view of the Catholic Church as something like the ur-party: a collective, highly disciplined organisation that had invented the idea of punishing deviations from proper doctrine. Modern parties, “secular little churches”, according to Weil, had inherited the notion of heresy. Even worse, they would always become their own ends, instead of a means to attain the public good. Hence they engaged in a kind of idolatry, as only God, according to Weil, was his own end.

Weil’s criticism of parties makes little sense unless one shares her belief that there is a clearly discernible common good for any country. Weil was sure of it; her main philosophical ally in this conviction was Jean-Jacques Rousseau, who had invented the notion of the “general will”. Through it, a fully unified people unfailingly aims at the public interest. Rousseau had demanded that there be no debate among citizens at all, so as to avoid factions coming together on the basis of shared special interests. Weil thought people could talk but, ideally, do it in small circles around intellectual magazines like the ones to which she contributed in the 1930s and 1940s.

Rule by saints It’s easy to reject or even ridicule such claims. Weil has been charged with advocating something like “rule by saints” (such as herself) in ways that reminded one of her fiercest critics, Conor Cruise O’Brien, of the very regime that she was fighting against in the 1940s: Marshal Pétain’s authoritarian (and Catholic) Vichy state. She has been called everything from antiliberal to antipolitical to,

God forbid, being a “pure intellectual”.

Such charges overlook that Weil, like many others, was reacting against the instability and party scandals of the French Third Republic, which virtually everyone, from de Gaulle to the French collaborators, held responsible for France’s defeat in 1940. Weil, impressed by her experience in England, was willing to concede that, for the Anglo-Saxons, conflict among parties was more like a sport with aristocratic origins. But for French political life, parties would always be fatal; hence Weil was horrified by the prospect of a Gaullist political party forming.

Still, the coherence of Weil’s proposal rises and falls with the idea of a single truth, or a single common good – ideas that democrats today tend to reject in the name of pluralism. Or do they? Mostly as a result of the euro crisis, many European countries are now dominated by two political phenomena that seem completely opposed yet, curiously, mirror each other: technocracy, which holds that there is only one correct policy, usually austerity, and populism, according to which there is one morally pure people who have been betrayed by corrupt elites. For neither is political debate necessary: the technocrats always know what’s right, and, for populists, the people can’t err. And, just as there is no need for debate, there’s no need for political parties.

Would Weil be a technocrat or a populist in today’s Europe? Probably neither. She was against whipping up collective passions in the way populists do. And the truth she hoped for was moral and spiritual, not a supposedly infallible economic theory. Her problem with parties, after all, had been that they always turned intolerant, and neither technocrats nor populists are known for their tolerance of other points of view.

So why, then, do we need parties? Edmund Burke, one of the first thinkers to justify them under modern conditions, had argued that parties provide something like a legitimate opposition. Without what political scientists call regulated rivalry there can be no democratic accountability. Parties structure political choices for an electorate in a way that Weil’s intellectual magazines never could (and in a way that the internet cannot today). Although none of them possesses the truth and nothing but the truth, the messy conflicts and coalitions among them can ideally ensure that what John Stuart Mill called their fractional truths might produce coherent policy.

Alas, today, the problem is precisely that the euro crisis has made opposition and accountability within nation states much more difficult. Can you really vote against the troika? Parties have fewer members and less stable support among voters, which led the late Irish political scientist Peter Mair to the conclusion that modern “party democracy” was over. Yet we only know how to do democracy with political parties. Weil’s proposal to abolish all of them does not help much in figuring out how a postparty democracy might work. But her impassioned plea makes us think harder about why we still need legitimate partisanship and which forms it might take beyond traditional party machines.

Jan-Werner Müller teaches politics at Princeton University. He is the author of Contesting Democracy: Political Ideas in Twentieth-Century Europe