The story of one remarkable, independent-minded witness to the Great Hunger 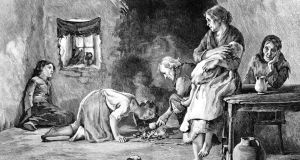 The 1846 reappearance of the potato blight in Ireland, earlier in the season than in the previous year and far more extensive in its geographic range and lethal intensity, prompted a series of measures by the newly installed Whig government signaling a more rigid approach to relief than had followed the first, and more limited, crop failure. Public works, governed by harsh conditions, were made the primary means of relief, while the movement of foodstuffs in and out of the country was left largely unregulated. As early as October, reports were appearing in newspapers throughout the world of “deaths from starvation”. It was clear that the government’s policies were failing to save lives and, in in the case of the public works, were exacerbating the suffering of the poor. As official relief floundered, an international movement spontaneously got under way to send private relief to Ireland.

The role played by private philanthropy during the Great Famine remains largely unexplored, yet reports of mortality following the second potato failure unleashed a fund-raising effort that was unprecedented in terms of its world-wide reach and its generosity. The heart-rending news from Ireland also brought to the country a diverse group of visitors, prompted in varying degrees by curiosity and compassion. This motley group included Elihu Burritt, the “learned blacksmith” from Connecticut, who had been attending a peace conference in Europe when he had heard of the suffering in Skibbereen; Pawel de Strzelecki, a Polish explorer who had volunteered to distribute relief on behalf of the British Relief Association; Lord Dufferin and the Earl of Glasgow, two Oxford students on spring break who also visited Skibbereen; and an array of young English Quakers, including James Hack Tuke, who offered their services to the Central Relief Committee in Dublin. Perhaps the most remarkable of these philanthropic visitors, however, was Asenath Nicholson, lately of New York. Not only did her gender and the fact that she worked alone make her distinctive, but the length of her stay did also. Nicholson spent more than two years in Ireland during which time she travelled extensively throughout the country, mostly on foot, and singing hymns loudly as she walked. Her travels brought her into contact with the poorest of the poor. Fortunately, Nicholson left a full and forthright account of what she witnessed.

Compassionate Stranger: Asenath Nicholson and the Great Irish Famine, by Maureen O’Rourke Murphy, relates the story of this remarkable woman’s two visits to Ireland. It also places Nicholson in her wider historical context as a transatlantic abolitionist, a temperance crusader, a social reformer, and, as Dr Murphy demonstrates, a sympathetic observer of the Irish poor. But who was this compassionate stranger and what brought her to Ireland?

Born in Vermont in New England in 1792, Asenath Hatch was raised in a puritan household, her family belonging to the Protestant Congregation Church for whom the Bible was central. Her given name, Asenath, was taken from the Book of Genesis. Nicholson’s independent spirit was evident early, she choosing as a young woman of 16 to work as a teacher, subsequently even opening her own boarding school. Around 1825 (other accounts suggest a different date) Asenath married Norman Nicholson, a widower with three children. The Nicholson family moved to New York City in 1829. Two years later, they opened a boarding house.

In Compassionate Stranger Murphy shows that when resident in New York, the Nicholsons became involved in politics, including in the two great social movements of the day – abolition and temperance. Notably, in both campaigns women played a significant, if publicly auxiliary role. In her private life, Nicholson had an evangelical belief in the moral and social reform of all classes. For her, lifestyle was an essential part of this reform. She was an advocate of the benefits of a simple diet, regular exercise and occasional fasting. And she became a champion of the vegetarian, coffee-free regime developed by Rev Sylvester Graham (of the cracker fame), who became a personal friend. In regard to personal hygiene, Nicholson had equally strong views, advocating a cold wash every day, with a tepid bath once a week, rising to three times in summer. Household cleanliness was of equal importance: she warned that “a dirty kitchen is like a dirty heart”. Nicholson’s convictions were evident in her professional life: with stays in her boarding house combining “comfortable rooms” with a strict observance of temperance and vegetarian regimens. The boarding house thrived, the marriage did not. Norman disappeared from official view in 1839 and, according to Dr Murphy, “his final years remain a mystery”.

In May 1844, an unaccompanied Asenath Nicholson decided to visit Ireland, her declared purpose being “to personally investigate the condition of the Irish poor”. A secondary purpose of her sojourn was to distribute Bibles. Nicholson already had some familiarity with her subject having worked with the Irish poor in the infamous Five Points district in New York. There, her sympathy had been aroused, declaring them to be “a suffering people”, and there, she made a determination to one day visit Ireland. Nicolson spent 15 months in Ireland, during which time she experienced universal hospitality. Nicholson’s sympathy for the Irish poor, both within Ireland and in the United States, was in marked contrast to contemporary orthodoxies. Unusually, she did not believe that the poor were to blame for their own poverty. Moreover, she regarded laziness as being more prevalent amongst the middle and upper classes, than amongst the poor.

Nicholson’s written account of her visit, Ireland’s Welcome to the Stranger; An Excursion through Ireland in 1844 and 1845, was published in 1847. By this time, the Irish poor were in the midst of a lethal famine. At this stage also, Nicholson was back in Ireland – but this time with the express purpose of assisting in giving relief to the starving poor. In January 1847, Nicholson opened a one-woman soup kitchen in Dublin. And this time, she came without the Bibles.

Inevitably, Nicholson was not a passive observer of what she witnessed. She was openly critical of much of the relief provisions that she observed and reprimanded many people for failing to do more. Her targets include (not unexpectedly) the British government, relief officials, and absentee landowners. But her criticisms also extended to groups that were more usually praised, including clergymen (especially well-fed ones), a ladies relief committee in Dublin (she believed its members were self-serving, unlike the hard-working ladies of Belfast) and even the Quakers were chastised by the ever-practical Asenath for selling corn in expensive sacks. Moreover, despite her strong religious beliefs, she did not view the Famine through a providentialist prism, but judged it to be a man-made disaster. Nicolson’s compelling and graphic account of her second visit was published in 1851 as Annals of the Famine in Ireland in 1847, 1848 and 1849.

Ireland’s Welcome to the Stranger and Annals of the Famine should be compulsory reading for every scholar of the Great Hunger. To understand their wider significance and to appreciate the generosity and the foibles of the author of these first-hand witness accounts, however, Compassionate Stranger is essential reading. In the latter, Murphy gives Nicholson her long-deserved recognition as a major commentator on Ireland both on the eve of the Famine and at the height of the tragedy. The book is meticulously researched and based on a 50-year fascination with Nicholson. In the interim, Murphy also edited and annotated Annals of the Famine (1998) and Ireland’s Welcome to the Stranger (2002).

Compassionate Stranger is a welcome addition to Famine historiography, and a major contribution to the still under-researched topic of the role of women in Irish famines.

Professor Christine Kinealy is Director of Ireland’s Great Hunger Institute at Quinnipiac University in Connecticut. Her latest book, Charity and the Great Hunger: The Kindness of Strangers, was published by Bloomsbury Press in 2013.