Remembering my grandmother: ‘She understood a child’s deep thirst for justice’ 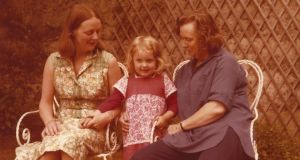 Léan, almost four years old, with her grandmother Eilís Dillon (right) and her aunt Máire, in 1978 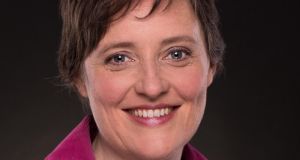 This week I’m remembering my grandmother Eilís Dillon, who died 20 years ago, on July 19th. An author of novels, plays and essays, she is best known for her children’s books – she published almost 40 of them between 1948 and 1992.

The first was a story in Irish called An Choill Bheo, the last a second World War novel called Children of Bach. In between, she wrote three dozen more, including her memorable adventure stories set in Connemara and its offshore islands – books such as The Island of Horses or The House on the Shore.

I remember Eilís as a warm, encouraging figure who combined unflappable serenity with a passionate drive to articulate the truth as she saw it.

As a small child I watched her knead bread, roll butterballs, play the cello, and knit strong patterned jerseys and cardigans for her relatives. I knew that every morning she went to her desk in the silent, book-lined study she shared with her husband, Vivian Mercier. Here she wrote until her time was up, her knitting in her lap to help her think.

Eilís did things properly. She believed in writing well for children of all ages, with full respect for their intelligence and competence. There isn’t a hint of condescension or sentimentality in her books. Also, she understood a child’s deep thirst for justice and resolved her plots accordingly.

For much of her career, Eilís was one of a tiny cohort of Irish authors writing for children, and for many years she was the only one producing realist (nonfantasy) children’s novels in any quantity. In her obituary for this newspaper, Declan Kiberd wrote, “If today there are whole sections in our bookshops devoted to Irish children’s literature, that is due in great part to her pioneering contribution, which helped to raise the prestige of this once-neglected area of literary endeavour.”

Looking back, it’s clear that her contribution was both conscious and deliberate. Born in 1920, Eilís grew up in the newly independent Irish state, and she set out to be instrumental in building the culture of her country through her writing. Her decision to focus on the everyday experience of Irish children, to give weight to their worries and desires, was more innovative in the 1950s and 1960s than we may realise from our 21st-century perspective.

The way we portray the world to children says a lot about our core values. We tend to show them a distilled version of reality, one that captures the essence of what is, and what ought to be.

It’s noteworthy that Eilís, who from her first marriage to her death lived an entirely urban life – in Cork, Rome, Dublin and Santa Barbara – set almost none of her children’s books in Irish cities. At the same time, it’s hardly noteworthy at all, because that’s what every other Irish children’s writer did, too, right up until the early 1980s.

What is the “real” Ireland? What is the proper way to present it to children? When I was growing up in Dublin in the 1970s and 1980s, the Ireland I encountered in fiction fell into one of three categories: rural, mythic, or rural and mythic. There was virtually no engagement with urban modernity as I was living it. I read, in fact, no stories set in Dublin. (It’s only fair to point out that some of my contemporaries recall reading such stories: Patricia Lynch’s The Bookshop on the Quay; Carolyn Swift’s Robbers series . . . but that’s it.)

There is nothing inherently wrong with a rural setting, obviously, but it is striking that Irish children’s fiction in the decades following independence occupied such a narrow range. My hunch is that this was a symptom of the postcolonial transition: after Ireland became politically independent it took several decades for our self-narrative to evolve and diversify from the established cultural categories.

Theory aside, the fact is that , in common with many Irish readers of my generation, my early literary diet was overwhelmingly British. I read classic children’s fiction, starting with the books my parents had loved best, and a wide selection of contemporary titles, mostly from the wonderful Puffin imprint.

Irish books I read included Walter Macken’s Flight of the Doves, Tom McCaughren’s Run with the Wind and its sequels, and perhaps 20 of Eilís’s 38 children’s books.

As a Dublin middle-class child – and a bit of a literary snob – I didn’t connect very deeply with Irish children’s fiction. I think it was the homogeneity, the predictability, that turned me off. Yes, I enjoyed Eilís’s books, and Macken and McCaughren, but not with anything like the adoration I trained on the British canon. I felt much closer kinship with the Bagthorpes, Pevensies, Fossils, Walkers and Bastables than with any character in Irish fiction.

It seems from discussions with friends that my experience was fairly typical of Dublin children of my generation: always reading about characters who were not like us, vaguely wishing we liked the Irish stories more than we did, slowly realising that our passionate identification with British children’s literature was illusory. It’s as though we lived in a sort of literary silent spot; we fell between two stools.

Things are rather different today. Irish children’s fiction saw an enormous expansion beginning in the 1980s and is now in rude health. Children from a whole range of backgrounds – even the urban middle class – can now find their circumstances reflected in the books they read.

And I hope they read what’s available – Roddy Doyle, Marita Conlon-McKenna, Siobhán Parkinson, Eoin Colfer, of course, as well as the vibrant novels of Anna Carey, Deirdre Sullivan and Katherine Farmar among others, not to mention those gearing up to follow them.

The grand project of giving juvenile Ireland a place of its own in literature will continue to lead us in new and surprising directions. Eilís would surely approve.

Léan Cullinan’s first novel, The Living, is out now from Atlantic Books