Relationships, their stinging hurts and their failures captured

This is a collection of short stories to shout about, one of the best books published this year 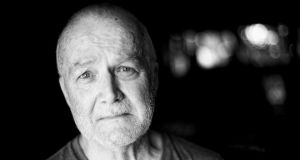 Russell Banks: his narrators are people who convince us of their pain and, often, their anger. Photograph: Oscar Hidalgo/New York Times

Book Title:
A Permanent Member of the Family

Fiftysomething Howard is not the nicest man who ever lived. But he is fortunate: even his former wife tries to help him, and she even persuaded her mother to let him use her vacation home for his recuperation. Howard has just had a heart transplant, and he still feels more dead than alive. That said, he is lucky to have a brisk, devoted nurse in Betty. She has a sense of humour. She needs it.

Howard’s surgeon, Dr Horowitz, is quite unusual: she is very human, and she wants to speak with him. There seem to have been many conversations. But then one day Howard notices that she “sounded tentative to him, less assured than usual. Not a good sign.” He wonders if he should be worried.

“No, no, no. Everything’s hunky-dory. I’m sorry to bother you. I’m not bothering you, am I? Can you talk?” Howard’s response is classic Russell Banks, brilliantly timed. He says, “Yeah, sure. What’s up Doc?” His reasoning is clear, as Banks continues of his grumpy anti-hero, “If she could say everything was hunky-dory, he could call her Doc.” The doctor has a favour to ask, not for herself.

The very young, fragile widow of the young man whose heart Howard now has wants to meet him. It proves a remarkable encounter, strange and unexpected yet eerily believable. Few writers look as closely at life as Banks and render it into an art that is truthful and unsettling.

This is a collection to shout about. It is one of the best books published this year, and everyone interested in the short story, particularly the American short story, will be reaching for it. It is quietly published with a simple yet complex image on the jacket: an egg in a bird’s nest. Banks is a serious artist whose novels, such as Affliction (1989), The Sweet Hereafter (1991), Rule of the Bone (1995), The Darling (2005) and the seriously underrated Lost Memory of Skin (2012), place him among the finest living US fiction writers.

His ambitious narrative Cloudsplitter (1998) confronted one of the most ambivalent figures in American history, John Brown, abolitionist, terrorist, madman, martyr, while Banks’s previous short-fiction collection, The Angel on the Roof (2000), is a masterwork. He is serious and has a moral grandeur that can at times appear righteous, but Banks at his best is a rare talent to behold, and this new book proves yet again that while he is one of the most underhyped of writers, he is also among the very best, with a better-developed sense of black humour than some readers may suspect of him.

He sets his work firmly within contemporary US society – usually the working classes, invariably the down at heel, although in Big Dog, a taut study of personal dynamics, he juxtaposes artists and academics.

Relationships, their stinging hurts and their failures have always fascinated him, and in the title story, a bleakly magnificent first-person account of the final death throes of family already shattered, the narrator sets out, albeit wearily, to set the record straight.

“I’m not sure I want to tell this story on myself, not now, some 35 years after it happened. But it has more or less become a family legend and consequently has been much revived and, if I may say, since I’m not merely a witness to the crime but its presumed perpetrator, much distorted as well. It has been told around by people who are virtual strangers, people who heard it from one of my daughters . . .”

Banks makes terrific use of voice; his narrators are people who convince us of their pain and often their anger. There is also a more muted regret, as in Lost and Found, in which a man watches as a woman he once, some years earlier, almost began an affair with approaches him across a conference gathering.

Elsewhere a much younger man looks on as an exhausted night worker for whom he invents a life on the basis of a shopping list she is holding gradually realises how mistaken his speculations are. Former Marine is an extraordinary study of what happens when control is lost. Connie – known as Conrad only to his ex-wife – has three sons, all of whom are involved in law enforcement. Strange, then, that he should take to robbing banks.

In Snowbirds a none too happily married teacher rushes down from upstate New York to Miami on hearing that her friend, a now retired former colleague, had suddenly lost her husband.

He had been having his fourth tennis lesson. “George dropped to his knees as if he’d won the final at Wimbledon and died of a heart attack.” The two women quickly shift roles between comforter and comforted, and the bereaved if unexpectedly pragmatic wife discovers that the ashes she has collected from the funeral home are not those of her late husband.

This is a strong collection, at times grim in tone. Banks creates characters that are at the point of looking back on their lives and examining their many mistakes. In Christmas Party a man is subjected to watching his wife rebuild a new life with one of his friends. The more successful replacement husband not only builds her a designer home but encourages her to adopt a baby.

The discarded husband seethes and can only hope that the new man will fall off the ladder as he places the star on the elaborate Christmas tree the happy couple have invited the neighbours to help decorate.

Yet for all the quality there is one story that dominates. Blue is best described in that by now cliched yet, here, utterly deserved epithet masterclass. In this story Banks achieves a level of perfection that will cause most writers to raise their hands in defeat.

Ventana, middle aged and well beaten by life, nevertheless has battled, and she has saved to finally buy a car of her own. She has saved and stands outside the used car lot as she has so many times. But now, with her savings stuffed into her bra, is the moment to strike.

Aware that she will be pushed and goaded by the salesmen, she is careful and wants to study what is on offer in her price range. Banks evokes the quiet determination of this woman; it is heartbreaking. She is careful and deliberate. She looks at each car. Without her noticing the place closes, and she is left alone at the mercy of the watchdog, a vicious pit bull terrier. Her terror causes her to heave herself on to the roof of the nearest car and cry for help. But no one answers; the tension builds, and it is getting dark.

A teenage boy appears by the fence and asks: “Yo, lady, what you doin’ up there?’ She has already decided against calling the police: she is a black woman locked in car dealer’s yard at night. The boy phones a TV station.

Exactly how good a writer is Russell Banks? How about wonderful? Alert to his society, he has a campaigning conscience, yet his art invariably transcends polemic because he is as committed to story as he is to the way people live, suffer and fail.