Quondam: Travels in a Once World review: account of epic cycle 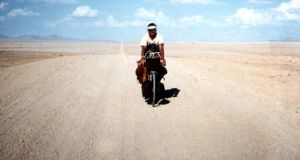 John Devoy: through sandstorms and intestinal worms, debilitating illnesses and precarious river crossings, he rides his bicycle across the Bayuda Desert.

Book Title:
Quondam: Travels in a Once World

In 1834, armed with several letters of introduction, Englishman Henry Inglis embarked on a trip around Ireland. Divesting himself of “carriage, or horse, or baggage”, he stomped through bogland and traded tobacco for shelter, recording – in some detail and with lively curiosity – the relative merits of poteen versus whiskey-punch and the importance of a house pig to the tenant farmers he encountered.

Though set more than a century – and half a world – apart, there is something of Inglis’s affable inquisitiveness about John Devoy’s account of travelling across North and Eastern Africa by bicycle, 30 years ago.

Traversing lakes, rainforests and deserts, Quondam: Travels in a Once World takes the reader on a 6,000km ride through Egypt, Sudan, South Sudan, the DRC, Uganda and Kenya. There is no shortage of drama on offer: sandstorms and intestinal worms, debilitating illnesses and precarious river crossings. The physical feat involved in hauling a bicycle across the Bayuda Desert is vividly portrayed.

But this is fundamentally a journey about people. Countless acts of kindness and unasked-for hospitality greet Devoy along his route, from the sugarcane and soups and tea pressed upon him at every turn, to hosts who give up their own beds to accommodate him. Other moments – such as an impassioned discussion of Yeats in rural Sudan – unexpectedly thread the distance between home and abroad, pulling them close.

There is much humour to the telling, too. In one delightful example, Flann O’Brien’s molecular theory is invoked while hitching with a friendly trucker. (“I am slowly becoming 100 per cent bicycle,” Devoy declares, “and you Ali, after 15 years of driving, you are already 100 per cent truck!”)

This is an account that can shift from descriptions of bowel movements to moments of quiet introspection: of the constellations on clear desert nights or the very nature of travel. These and other reflections are enriched by relevant asides. The role of the Belgian Congo in radicalising Roger Casement is just one; the little-known link between the Coca-Cola Company and modern-day Sudan another.

The personal drama running through Quondam provides an interesting counterpoint to the journey itself. But when these two threads finally – and disastrously – intersect, a less-nuanced attitude shows itself. The encounters described here are also almost exclusively with men. This is something acknowledged in the book, but it nevertheless illustrates the limitations of any travel experience, bounded as it is by gender, language and cultural access.

Writing about such experiences is an inherently risky business. The world of travel writing is littered with examples of condescension, inaccuracy and sweeping generalisations, particularly when the subject is Africa.

Quondam, to its credit, commits none of these sins. Unlike that other well-known chronicler of African travel, Paul Theroux, Devoy displays both a warmth and an admirable humility. In the desert of North Kordofan, he reflects: “I realised I knew nothing about anything here. I barely knew my own experience.” Not a sentiment you are likely to hear from Theroux.

This humility seems linked to the slower, more intimate pace of two-wheeled travel, and the enforced closeness with – even dependence on – the people and countries being written about.

In many ways, Quondam is less about a place than a process. Far more than Theroux or Inglis, it owes a clear debt to Dervla Murphy, that pioneer of Irish cycling travelogues – and who in fact authors the book’s introduction. In it, she joins Devoy in railing against “Internettery” and the ease of modern travel.

There is an undoubted charm and inherent value to the low-tech experience described here. But the grit of “real” travel – specifically travel by bike and before the advent of smartphones – becomes a too-frequent refrain throughout. The reader is treated to many caustic reflections on modern cyclists, kitted out with “helmets, speedometers, heart monitors, GPS, even satellite dishes, for God’s sake!”

This touch of self-congratulation, here and elsewhere, is understandable. But it is just one of the reasons that Quondam could have benefited from a firmer editorial hand. Errors and occasional cliches detract from the reading experience, as does the length. That this is only the first of three planned books about this trip only amplifies the sense that much could have been condensed.

While not quite in the same league as Dervla Murphy’s trailblazing works, Quondam is a consistently entertaining, thoughtful and eye-opening read. Fizzing with youthful energy, it fully embraces the challenge laid down by Robert Louis Stevenson: “The great affair is to move . . . to come down off this feather-bed of civilisation and find the globe granite underfoot and strewn with cutting flints.”