Portrait of author Damon Young as a reader 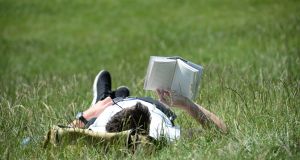 Book Title:
The Art of Reading

The vintage fingerprints and splashes of egg yolk adorning my Ladybird edition of The Three Little Pigs. The wild flowers pressed between the pages of a Danilo Kiš. We measure out our lives with books as well as coffee spoons. Those we have read, those we have not; above all, those that have read us. “To my right is a small stained pine bookcase,” writes Damon Young at the beginning of The Art of Reading. “It contains, among other things, my childhood.”

On the latter subject, and his subsequent development, he remains rather tight-lipped. Reading, we learn, was initially “a prop in [his] performance of superiority” and, crucially, a “liberation from school’s banality and home’s atmosphere of violence”. At the age of 11, he sought refuge from his father’s “morning screams” in ninja books and make-believe. As a teenager he was “Prufrock avoiding Prufrock”. Finally he alludes to his wife’s “grave illness” which rendered him incapable of finishing AS Byatt’s Still Life. There ends the confessional: this is a portrait of the author as a reader.

In the expository chapter Young navigates his way round the labyrinthine shelves of his own Library of Babel, travelling back and forth in time, both personal and historical. His early passion for Sherlock Holmes was shared by William Gibson, whose evocation leads – “[T]wo shelves under” him – to Orhan Pamuk’s reflections on childhood perusal and then on to Edith Wharton’s – “[T]wo rooms behind and one century before him” – and from thence to Rousseau, Sartre, de Beauvoir (close to the former “in [his] library as in life”) and so on. Taking in Batman as well as Heidegger, the breadth of reference is impressive, but never overbearing, thanks to the Australian philosopher’s lightness of touch, self-deprecating humour and endearing deployment of the word “bunkum”. Having traced a desire path through a lifetime of books, Young reflects upon six Aristotelian virtues (curiosity, patience, courage, pride, temperance and justice) that reading requires, exhibits or promotes.

The Art of Reading is not just another bibliomemoir; it is also a manifesto of sorts. The author shuns a utilitarian approach to his subject – regarded as “an end in itself” – summarily listing its ancillary benefits with a commendable degree of scepticism. After all, “bastards enjoy fiction too” and, as he cheekily points out, some of them are authors. His ambitious goal is to re-enchant an activity which, “cosmically speaking”, is very much “against the odds”. Reading, he laments, is grossly undervalued, its wonders all too soon forgotten.

It tends to be thought of as a rudimentary skill, acquired in early childhood, rather than a lifelong project to be honed from Miffy to Proust. It has the added disadvantage of being a largely invisible pursuit, incapable of competing with the social cachet conferred by authorship, or rather the “fantasy of publication”. A text, however, is “only ever half finished by the writer”; it is the reader who brings it to life. Should the human race be wiped out, books would be “lived in, eaten, buried, climbed upon, oxidised, but not read”.

Young contends that the reader’s demiurgic power is not only forgotten, but also repressed, because of the anxiety it generates in highlighting the contingency of our books and lives: “Giddiness arises as I become aware of my responsibility for affirming one world and not another, and the fragility of whatever is chosen. Every string of letters can be an existential challenge”. What Michel Foucault called the “author function” is thus “a way of making reading safe”. Words become “someone else’s job”: the book “just means this, end of story”.

If Young explores how Rousseau or Sartre became fully aware of their existence through reading, he also considers how fiction may provide an escape from the confines of the self – Dickens’s “hope of something beyond that place and time” – and the increasing encroachment of the actual upon the possible.

In order to truly appreciate a text we must also “overcome our egocentrism”, which Virginia Woolf signally failed to do vis-a-vis Joyce, whom she initially read through the prism of class snobbery and rivalry. The philosopher concedes, however, that Iris Murdoch’s notion of “unselfing” has its limits. We are “partial beings” whose “incompleteness varies” with age, so that some novels – Henry James’s in the case of Evelyn Waugh – need to be grown into.

Most importantly, perhaps, literature enables us “to stifle the little oligarch” within. Villains – in fiction as well as fact – “see all things as a means to an end”, which is always “some vision of perfection”. Reading teaches us to accept that things simply are, and that they may end without concluding: “Only the Library of Babel continues. It makes sense to restlessly move between artworks, never believing that any one is perfect.”