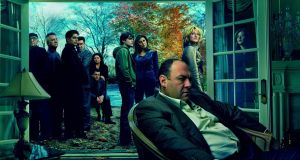 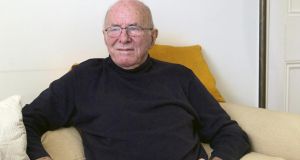 Clive James: there’s a good deal of Jamesian wit in Play All – “The Wire was Waterworld with the water let out”. Photograph: Hazel Thompson/The New York Times

From 1972 till 1982, Clive James wrote a weekly television column for The Observer: a newspaper that was then a wonder of smart and stylish journalism. Often he had two TVs on the go at once: “Elsewhere on earth, they were inventing the VCR machine, but too late to help me out.”

He had to transcribe rapidly all interesting dialogue and absurd commentary, training himself to a precise but oblique sort of visual scrutiny. Here was a critic who couldn’t take his eyes off Sue Ellen’s quivery lower lip in Dallas – “her mouth practically took off” – and could devote whole paragraphs to the extraordinarily subtle rise and fall of Alec Guinness’s eyebrows in Tinker Tailor Soldier Spy.

James approached his reviews with the conviction that “popular entertainment is well worth doing”. But his writing went further: he already looked at television as if you could vanish inside it forever.

Six years ago James learned he had “a polite but insidious form of leukemia”. Time was running out, but time seemed oddly to expand: he took to binge-watching old episodes of NYPD Blue with his daughter Lucinda.

That show’s pioneer ancestor Hill Street Blues had been one of the few American programmes James could take seriously by the time he quit TV reviewing. He’d imagined the golden age of British television was also coming to an end, with deregulation and consequent atomisation of audiences. But in the years since, and especially the past decade, we have all begun looking at television – often truly great television – with the sort of critically rapt attitude for which James once got paid. The box set and its online successors have encouraged not only inventive or immersive shows, but a new “way of being” in front of the box.

The most obvious alteration is to our experience of TV temporality. Of course, you could still dump yourself in the path of the old “sludge channels”, as James sometimes does, but that experience – which had its rigours and pleasures – is now reserved for bad pubs and worse waiting rooms. Instead we submit via DVD, Netflix, Amazon et al to the repetition-with-difference of a baggy but contained series – possibly for the umpteenth time. It used to be said that soap operas were the modern equivalent of serial novels in the 19th century, but it was never an accurate comparison, because you couldn’t return to Peyton Place over breakfast nor gather all the parts and take to your bed for the weekend. “Surely three episodes was the maximum possible”: so James thought as he began to binge-watch. Now he and Lucinda get through four or five episodes each Saturday.

If NYPD Blue was James’s gateway to the druggy slow time of the binge-watcher’s schedule, it was The Sopranos that convinced him something new was happening in post-millennial American television. “The Sopranos is so capacious that it can sabotage itself and still keep your devotion.” It’s an obvious point but an essential one: a long-running drama allows for levels of drift and inconsistency that would be ruinous in a film, even a long one like The Godfather: “Don Corleone is all of a piece: we aren’t asked to imagine him in mental trouble.” Tony Soprano, on the other hand, is nothing but emotional vexation, spread over 86 episodes.

As James points out, the most debased writing for television still has to wrestle with the problem of character: “Even the people who once made the final, foundering episodes of The Love Boat had to reach into the depths of their well of feeling.”

One of the ways television drama has recently expanded is by hanging on an already complex main character – Don Draper in Mad Men, Piper Chapman in Orange is the New Black – a wealth of “minor” character studies that would be impossible without team-writing methods borrowed from comedy. Aaron Sorkin’s The West Wing now looks like the last brave stand of auteur TV: a glittering ensemble held together by a single writer’s stylistic imprimatur, everybody stalking the White House halls and spitting witticisms like La Rochefoucauld.

Early in Play All James recalls that recurring discussions with his daughter about “the magnificence of Andy Sipowicz” in NYPD Blue seemed to suggest a new type of television criticism. Writing in a preface to his collected Observer columns in 1990, James said: “The secret of knowing what you think is to admit what you feel.”

In his new book he claims he wanted to hang on to the sense of irresponsibility on those post-Sipowicz chats; he didn’t want to find himself wondering “what would Theodor Adorno have said” about a box set of Veronica Mars. The obvious locus for this new critical voice is in the online proliferation of viewers’ voices, whether obsessive, thoughtful or merely cranky. But James barely engages that threat to the traditional critic’s ex cathedra clout.

There’s a good deal of Jamesian wit in Play All – “The Wire was Waterworld with the water let out” – but I rather wish he had given us more of the on-the-fly fan’s-eye view promised by his title, and perhaps a dash of Adorno too.

The chapters on specific shows are too often texturally thin (not enough eyebrow action) and conventional in their conclusions. Add to this an embarrassing but familiar habit of judging female characters and actors by their “comeliness”, and it all feels a touch too comfortably couch-bound.

It might have seemed arbitrary, but a book-length essay about just one of his favourite TV shows might have been more daring and engaging. I’m hoping his daughter is biding her time with a box set of Orange is the New Black, and that James, like his beloved Dante, “stays in the ditch to watch the ruined people, how they spend their time”.

Brian Dillon is an editor of Cabinet magazine, where he writes a column about sentences