Picture books: Alice’s White Rabbit and some other subversive bunnies take a walk on the wild side

Robert Dunbar on children’s picture books from Lewis Carroll, Jon Scieszka and others 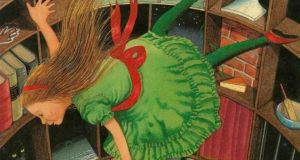 Of the numerous artists who have given us illustrated versions of Alice’s Adventures in Wonderland few have managed to reimagine the world of the original as successfully, or as colourfully, as Anthony Browne. His 1988 interpretation, now reissued to mark the 150th anniversary of the first publication of Carroll’s classic text (Walker Books, £14.99), is an idiosyncratic, vibrant and surreal sequence of images of the book’s best known moments and characters. It captures strikingly the zany humour of Carroll’s vision without neglecting his occasional forays into darker, more disturbing territory.

Carroll’s first publishers, Macmillan, are celebrating the Alice anniversary in some style with various attractively produced reissues of the text itself and of related archival material. An edition dating from 1927, complete with the Victorian illustrations by Sir John Tenniel, is now re-released in paperback format (£4.99). A selection of the Tenniel illustrations, coloured on this occasion, can be found also in a delightful miniature edition (£8.99) which reduces the text to a sixth of its original length. Reproduced from an edition first published in 1907, this “little folks’ edition” is sure to become a collector’s item. Equally attractive, and with a further selection of Tenniel drawings, is the reissue of The Nursery Alice, dating from 1890 and the first colour edition, adapted by Carroll himself for a younger readership.

Where “zany humour” akin to Carroll’s in today’s picture-book texts is concerned, the work of Jon Scieszka in titles such as The Stinky Cheese Man and Other Fairly Stupid Tales has a devoted following.

His writing demands that readers abandon conventional assumptions about books, stories and the nature of reading itself to the extent that it becomes an engaging subversive activity. His new offering, Battle Bunny (Walker Books, £6.99), co-authored with Mac Barnett and illustrated by Matthew Myers, sees a young boy transform a tame birthday present of a book into an extravagant adventure yarn. Refreshingly iconoclastic, this is a book which provides a welcome contrast to the high earnestness of so many children’s picture-books.

If Scieszka is keen to make us reconsider a book’s verbal dimension then David Wiesner, in Art & Max (Andersen Press, £6.99), is determined that we confront our visual understandings. The Art and Max of the title are lizard artists, the former a master, the latter an ambitious beginner. In his delineation of their relationship as teacher and student Wiesner takes us on a paint-spattered tour of the world of artistic creativity, colourfully employing a range of media and teasingly interjecting occasional pictorial allusions to the work of established artists. The result is a truly original picture-book, celebrating the transformative potential of art and friendship.

Pom Pom, the panda hero of Sophy Henn’s Pom Pom Gets the Grumps (Puffin, £10.99), is, initially at any rate, in no mood to accept the various offers of friendship made to him. Here, any transformative possibilities it may have will come reluctantly, if at all. The problem is that he has woken up on one of those mornings when nothing seems right, when “Harrumph” is the only possible response to the world around him. The manifestations of this grumpiness are the source of the book’s humour, a quality evident in the range of the panda’s hilarious facial expressions and enhanced by Henn’s use of the brightest primary colours.

Friendship spurned serves also as starting point for the theme of David Lucas’s beautifully designed This Is My Rock (Flying Eye Books, £11.99). Employing only four basic colours and a minimalist dialogue text, Lucas tells a story of a young goat claiming exclusive ownership of an outcrop of rock.

Other creatures, including some fellow goats, wishing to share his territory are summarily dismissed. But loneliness eventually overtakes him and it is only when a little bird flies in to the rescue that a new awareness dawns. All facets of the art of the picture-book creator are splendidly brought together here, reminding us that simplicity of approach can be as effective as complexity.

Emily MacKenzie’s Wanted! Ralfy Rabbit, Book Burglar (Bloomsbury, £6.99) makes most other efforts to lure children into books seem very po-faced indeed. Who could resist a hero who “loved the smell of books and the sounds of the pages flicking” or who counts among his favourite reads The Catcher in the Vegetable Patch? This is Ralfy Rabbit, whose voracious appetite for the written word will eventually lead him to stealthily criminal behaviour – but all, of course, in the best of causes. MacKenzie’s artwork, equally successful in portraying rabbit and human, is as bright, mischievous and witty as her prose. This is a treat for all bibliophiles and for all those in the making.

The shortlist for this year’s Children’s Books Ireland awards, announced just as we go to press, will be discussed in a future column. In the meantime, congratulations to all the nominated titles: Brian Conaghan’s When Mr Dog Bites, Sarah Crossan’s Apple and Rain, Chris Haughton’s Shh! We Have a Plan, Oliver Jeffers’s Once Upon an Alphabet, Sarah Moore Fitzgerald’s The Apple Tart of Hope, Áine Ní Ghlinn’s Daideo, Louise O’Neill’s Only Ever Yours, Gabriel Rosenstock and Brian Fitzgerald’s Haiku Más é Do Thoil É, Deirdre Sullivan’s Primperfect and the short stories anthology Beyond the Stars, edited by Sarah Webb.