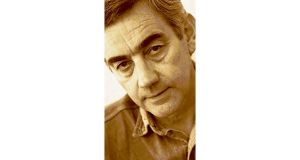 It seems the oddest thing to even contemplate. Yet Frank Delage, an Australian and the inventor of what he believes is a revolutionary piano, decides to bring it to Europe in search of buyers. What better market to test, he feels, than that of Vienna, the world capital of music and a place already crammed with Steinways?

Despite having contacts in Berlin, he heads to Austria, where he knows no one. He is aware of the folly of his project, but he proceeds apace because Frank – middle-aged, single, not quite lost, not quite found – remains something of a dreamer, with the kind of mind that settles on facts, however random. Above all, he has his regrets, and they have apparently helped, and continue, to sustain him.

As the narrative opens, Frank, having not exactly conquered Vienna, is on his way home:

It was not so much a headlong rush from Europe, more a slow return to Sydney, instead of hopping on a plane, which would have been easier, Delage had chosen to return by ship . . . a container ship, stacked with the rectangles of various faded colours, which stopped at half a dozen ports along the way.

The plan had been for him to have some time to gather his thoughts and rest from having talked too much.

Considering the strange pattern of events, a period of solitude would have been a good plan. But plans change. Instead of returning home alone, he is accompanied by Elizabeth, the 36-year-old daughter of the one person in Vienna who had tried to help him, the enigmatic, elegantly unhappy Amalia von Schalla.

It is the handsome Amalia, with her lingering traces of youthful beauty, who fully captivates Delage. All the while, as he travels over endless tracts of water, gazing at Elizabeth’s easy nakedness in their shared cabin, his thoughts return to Vienna and Amalia, prisoner of her own freedom and the wealth accumulated by her all-knowing husband.

The Australian novelist Murray Bail, author of the beguiling outback fairy-tale romance Eucalyptus (1998), is a tremendous artist, wilful in the originality of his technique as well as in his response to time and memory.

This intelligent and shockingly funny novel shifts and shimmers as restlessly as the various seas being crossed. Frank is physically on the boat, but his multilayered thoughts are elsewhere. There is a hint of John Banville’s wonderful short novel The Newton Letter (1982) in Bail’s use of the theme of frustrated desire being assuaged by proxy with a lesser satisfaction.

The voyage unfolds, as does the story of what actually happened in Vienna. Even while engaged in conversations on board, most particularly with a Dutchman recounting his failed marriage, Delage thinks back to Vienna and his failure to respond to Amalia. The bitter-sweet tone is brilliantly countered by the wryly satiric intent that shapes most of the book, with its several attacks on literary festivals, critics, the misuse of art and the “horror of aesthetics” shared by university professors far more comfortable discussing “political situations” and “historical influences”.

Bail cleverly lampoons the homes of the wealthy:

The von Schalla houses in Vienna and Upper Austria were more like warehouses for oil paintings and furniture, cavernous corridors and galleries, the small drawing rooms where elderly servants crept in and out, the many details of lavishness spaced out to impose themselves as required.

Elsewhere, in one of several superb set pieces, Delage is feeling trapped at a dinner party until one of the guests begins a spirited rant:

“Europe is tired. This city we call Vienna is tired. A spiritual and artistic exhaustion is here . . . It has always been difficult producing something exceptional. It is more difficult now. Hemmed in on all sides our writers are crazed, become vitriolic, repetitious, misanthropic, anti-state, catch alight. We all have our heroes who have committed suicide.

“Here every artistic endeavour shifts forward, then gets caught up in the circles.”

The speech electrifies Delage, even more so on learning that the speaker is a famous music critic. This is the man whom Delage most wants to hear his new piano. Just when this meeting could take place, the critic is informed that his house is on fire and he leaves. When the critic, the smell of smoke still clinging to his clothes, comments on Delage’s piano, he says its sound is “too pure” for any existing music to be played on it.

In ways, Delage’s experiences are a modern variation on Voltaire’s Candide (1759). Delage is also an optimist at a time when optimism has been reduced at best to complacency. He makes notes of the interesting comments of those around him, and records stray observations. It is as if he is not quite complete, and this makes Bail’s jigsaw-like narrative all the more seductive.

This is an astonishing, defiant little book. Though concise in scale, it is vastly thought-provoking, with some inspired nods to the great Austrian writer Thomas Bernhard’s final novel, Woodcutters (1984).

Chance details, a reference, a gesture, even a newspaper, lead the narrative into yet another enticing sidestreet. Delage leaves Vienna to travel to La Spezia, in Italy, to board the ship back to Australia. He almost misses the sailing: “the gangway was being winched up from the wharf.” Bail evokes the dockside scene with the skill of a painter: “Delage arrived in a taxi, the driver sounding the horn mercilessly, the Italian instinct for melodrama, it drove fast along the wharf to the middle of the ship, and stopped.”

It is at this moment that Delage experiences a profound personal revelation: “his entire time in Vienna had not followed a logical path, it had been hasty, improvised, irrational, either he was waiting or he was running late, unsure of what he should do next . . . it was a condensed version of his life in Sydney . . .”

Frank’s journey proves costly, if ultimately worthwhile. If ever a novel could be said to exceed the sum of its many sensations, this masterful concoction engages, excites and perturbs with singular virtuosity.

Bernadette Kiely evokes an isolation that has become routine
4