Penny for your thoughts? Listowel Writers’ Week offers prizes, lots of them 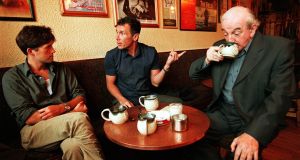 Lost for Words by Edward St Aubyn is a witty, if at times excoriating satire on the behind-the-scenes machinations of a major literary prize, the fictitious Elysian prize. It follows the members of the judging committee as they discuss the contending submissions from over 200 hopeful novelists, the humour generated in the parodying of the novelists’ output as well as the judges makes for a very entertaining read.

This potshot at the arbiters of literary prizes was written after St Aubyn was shortlisted for the Man Booker prize with Mother’s Milk in 2006 but was pipped at the post by Kiran Desai’s The Inheritance of Loss. Ironically Lost for Words won the Wodehouse Prize for comic fiction in 2014. St Aubyn visited Listowel in 2011 where he gave a memorable reading in St John’s Theatre and enjoyed the hospitality in John B Keane’s pub.

St Aubyn assembles a cartoonish line-up of judges including a thriller writer called Penny Feathers, a retired Foreign Office mandarin and a Scottish politician called Malcolm Craig, whose own special interest is naturally “anything with a Scottish flavour”. There are no parallels to draw between this literary prize and the peerless judges that read the submissions yearly and choose the winners in many categories of creative writing at Listowel Writer’s Week.

Listowel Writers’ Week was founded in 1970 and is now an internationally acclaimed festival devoted to bringing together writers and audiences in the historic town in north Kerry. The festival awards prizes and confers laurels to writers of all ages, competency and chosen form. The much coveted Kerry Fiction Irish Fiction Award is a cash prize of €15,000 and is the largest monetary prize available solely to Irish authors. The list of winners over the past decades is a veritable who’s who in the fiction world with writers like John McGahern, John Banville, William Trevor and Neil Jordan being joined by Eimear McBride, Gavin Corbett and Eoin McNamee in the last three years.

Some novelists with Irish passports are unaware of their eligibility for this prize. When I read Netherland back in 2008 I was blown away by Joseph O’Neill’s clever crafting of this story of family, identity and politics. When I saw his handsome face beaming from a page in Vogue and read the accompanying piece about his apartment in the Chelsea Hotel, his very glamorous lifestyle and his Irish grandfather from west Cork, I brought his name to the attention of the literary committee of Listowel Writer’s Week. There was some debate on whether he was Irish and therefore eligible to be considered for the prize.

As a great lover of fiction and no stranger to embellishment I solved all dispute by declaring him to be a second cousin from a very tangled west Cork ancestry. The debate was settled and O’Neill flew to Ireland that year and collected the Kerry Group Fiction Prize for Netherland.

This white liar trawled the Listowel Arms after the award ceremony in search of Joseph so I could fill him in on our fake ancestral lineage. Unfortunately, one of the committee was with him and with great Kerry theatricality introduced Joseph to his cousin Anne. The great novelist ran with the plot, greeted me with a familial hug and even asked about the mythical Cork uncle. At that point a crowd had gathered, buoyed by the emotional story of the long-lost cousins meeting. We were unanimously declared to be the image of each other, very alike around the eyes, more like siblings than cousins.

The Welsh poet RS Thomas wrote that poetry is that which arrives at the intellect by way of the heart. Tennyson said that by reading poetry he “was able to sweeten solitude itself with the best society – with the companionship of the wise and the good, with the beauty which the eye cannot see, and the music heard only in silence.” The author Rachel Kelly in her memoir, Black Rainbows, writes about the importance and consolation of poetry in her recovery from severe depression. She has said in interviews that poetry works in a similar way to mindfulness, forcing us into the present.

Prizes can be a potent stimulant to the young creative writer. In a recent interview the poet Sarah Howe, who has just received the prestigious TS Eliot Prize for her debut poetry collection, Loop of Jade, spoke of the importance to her of winning the Eric Gregory Award. In the daunting early years when she was learning the craft and finding her unique voice, this prize gave her a shot of confidence and encouragement. This sustained her through the next few years and allowed her to realise that she too could be a contender.

The Pigott Poetry Prize in association with Listowel Writers’ Week is worth €5,000 to a poet whose collection is published in the year previous to the festival. This monetary injection can give a poet a financial break that enables him to continue the creative endeavour of writing poetry for our enjoyment. With writers’ incomes shrinking the image of the poet starving in the garret has become an uncomfortable modern reality. In this centenary year of the 1916 Rising, many of whose leaders were poets, such as Patrick Pearse, Joseph Plunkett and Thomas McDonagh, it has never seemed more important to champion our poets, preserve our literary heritage and fuel a literary future. For poets without a collection published, the Single Poem Competition and the Poetry Collection Competition are well worth entering and can act as a stepping stone to the world of pamplets, chapbooks and publishing.

Anne Enright in her introduction to the Granta Book of the Irish Short Story writes that short stories are “the cats of literary form; beautiful, but a little self-contained”. In recent years there has been a renaissance of the short story form. Collections by Mary Costello, Colin Barrett and Claire-Louise Bennett have been lauded by the international press. Online and print journals such as Gorse, the Penny Dreadful and the Stinging Fly provide a launch pad and a nurturing home for the emerging short story writer. The Bryan McMahon Short Story Award is an extremely prestigious award for a writer, worth €2,000. Past winners include Christine Dwyer Hickey, who won the short story competition twice and subsequently won the 2012 Kerry Group Irish Fiction Award with her novel, The Cold Eye Of Heaven. This is a very esteemed competition and hundreds of submissions are received each year. This year the judge is renowned short story writer Eilís Ní Dhuibhne, who will have the herculean task of selecting a winner.

As a nation we have produced some of the finest playwrights, from Beckett to Shaw, from McDonagh to Friel. The Eamonn Keane Full Length Play is a competition in association with Siamsa Tire. This award is given each year for an original, unperformed and unproduced play in memory of the renowned Listowel-born actor, brother of John B, who twice won the Jacob’s Award. Last year’s winner Sinead Moriarty had her play read in Siamsa Tire in November by the accomplished actors Kate O’Toole and Aoife Duffin. This award allows the playwright an opportunity to see the work performed in a real theatre setting and is a vital stimulus for any writer working in this medium.

The author Michael Cunningham stated that writing is by definition an optimistic act. The evening air is heady with the roses of optimism on the opening night of the festival in Listowel when the prizes for all competitions are awarded. The young winners of the Kerry Co Council Creative Writing Competition sit with their beaming parents side by side with poets, playwrights, aspiring sports journalists and Man Booker Prize winners. Everyone is united by a shared love of words, of story and narrative, of theatre and drama, all disciples of that powerful alchemy that writers perform when they lie down “where all ladders start/ In the foul rag and bone shop of the heart”.