Paul Auster: ‘We should respond to Trump's stupidity with a world boycott of American goods'

The writer, whose new novel, ‘4 3 2 1’, has just been published, says he’s frightened by and angry about Donald Trump and his new White House administration

An extract from 4 3 2 1, narrated by the author. Video: Macmillan Audio 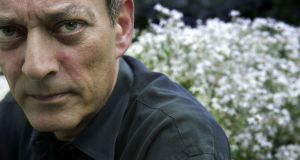 Paul Auster: “The very act of writing a novel or a poem strikes a blow for democracy.” Photograph: Jean-Christian Bourcart/Getty Images

Paul Auster has some ideas about how to resist what he says is going to be a real assault on American society. We meet in the novelist’s Brooklyn brownstone the week Donald Trump is inaugurated as president of the United States. Auster, who turned 70 yesterday, is “very frightened and very angry”.

“What I would love to see in this country is people pushing back on everything they try to get done – and internationally if Trump has the stupidity to try to get out of the Paris climate-change accord, why not have a world boycott of American goods? All the signatories to that treaty say, ‘All right, we’re going to punish you by not buying anything from your country any more.’ It’s a suggestion.”

He has a few more.

“You don’t want to put people at risk, but if there was a general strike of all immigrant workers, the whole economy would shut down. We wouldn’t function. There’s no hotel or restaurant that would remain open.”

It’s something that Auster and his wife, the novelist and essayist Siri Hustvedt (who is typing upstairs), are deeply troubled by. Hustvedt recently gave an impassioned speech on the steps of New York Public Library, and she and their singer-songwriter daughter, Sophie Auster, plan to attend the Women’s March in Washington, DC, that weekend. Auster has been called on to speak out too. This year he will accept the presidency of the literary organisation Pen America, a role he has previously resisted, as one way of taking a personal and public stand.

“I have a new metaphor for thinking about what’s going to happen. Until now America has been a pretty solid country. Apart from the civil war we’ve had peaceful transference of power. We think of ourselves as a country of laws and institutions, and because they’ve seemed so solid I tend to think of these institutions as granite buildings.

“Well, I think what we may discover now is that these buildings are actually made of soap and that when the new administration takes over in a few days, and they start shooting their hoses at those supposed granite buildings, they’re going to melt and turn to suds, and we’ll just have water running in the streets. We have to be very vigilant to prevent those hoses being put on full blast.

It’s a startling, uncomfortable image with a touch of the ridiculous: the United States dissolving into bubbles at the behest of a group of predominantly white men with water guns. But then Auster has always had a bent towards the absurd and the surreal, which doesn’t necessarily mean the fantastical. If anything his “postmodern” fiction, with its frequently unstable sense of truth and reality, seems more resonant now than ever, as we enter what seems like a new type of reality.

Auster clearly gets a kick out of the strangeness of life; it is territory he has consistently courted in his writing. Before I sit down we’re talking about his experiences of Ireland, and he brings up literary curiosities such as James Joyce’s glasses or Samuel Beckett’s telephone, which you can find at Dublin Writers Museum. “Ridiculous things, Brendan Behan’s typewriter. It’s kind of a museum of irrelevant facts,” he says with dry amusement.

He tells another story of himself as a young man, following an ex-girlfriend to Co Sligo (the writer Lydia Davis, to whom he was subsequently married for a short period). There was a fracas involving a car driven into a tree and alcohol being sold on the premises where the group were staying. Auster arrived just as the detective was called.

“But, get this, this is what I’m leading up to, come with me,” he says. We go down to his basement, a labyrinthine library he shares with Hustvedt. “You know the name of the firm the lawyer worked for?” Hanging on his wall is photographic evidence: a plaque from a Sligo solicitor’s office with the fitting name of Argue & Phibbs. We laugh at the absurdity. What are the chances?

Indeed, chance has been a major preoccupation in Auster’s work, since he wrote in City of Glass, the first in The New York Trilogy, his meta detective series, “that nothing was real except chance”. His new book, 4 3 2 1, could be seen as another variation on this theme, and the writing process was intensified by a fear of random events.

“One of the reasons pushing me hard was the fact that I was 66 when I started, and 66 happened to be the age when my father dropped dead, just unexpectedly dropped dead, a man in apparently perfect health, dead at 66. I can’t tell you what a weird sensation it is to be older than your father ever was. And so I kept thinking, Maybe I’m going to die.”

The Invention of Solitude

Before that Auster had predominantly published as a poet and translator of French writers such as Mallarmé, and since then he’s been a prolific novelist, memoirist and film-maker.

“I had the sensation as I was writing this book that I was closing a big circle that had started with The Invention of Solitude, so I think they do vibrate, but I don’t know how.”

Some are calling 4 3 2 1 Auster’s magnum opus. It follows the protagonist, a Jewish boy from Newark named Archie Ferguson, in four parallel lives, as chance happenings or changes in family circumstances steer them in one peculiar direction or another. In one incarnation he goes to Columbia University, in New York, and becomes a journalist; another Ferguson goes to Princeton University, on a scholarship, and becomes a novelist. It seems dense, at almost 900 pages, but it reads with surprising fluency. “I know it’s an elephant,” he says, laughing, “but I hope it’s a sprinting elephant.”

Auster was also born in New Jersey, in 1947, and attended Columbia, so the question of what derives from real life arises, as it often does in his work. It’s not autobiographical, he says. “The book shares the geography of my early life, and the chronology of my early life, that’s all.”

“As I was writing the book, eerily I began to feel that America is exactly the same now as it was then: we haven’t figured anything out, we’re still fighting ridiculous wars, and still a racially divided and violent country. We’re at another moment of horrible division, and the last time we were this divided was that time in the 1960s.”

History remains stable in the book, despite the changes in the characters’ personal lives, but you get the impression that Auster is uninterested in drawing lines between fiction and nonfiction.

“Memory and imagination are almost the same thing,” he says. “Even physically, in the brain, it’s the same thing. Siri brilliantly said the feeling that comes over you as a novelist is that you’re remembering things that never happened.”

This is not to say that he’s post-truth, the notion of which he finds a bit absurd.

“There’s truth and there’s not truth, and we have to defend it,” he says.

In all this Auster stresses the importance of the fiction writer in troubled times.

“The very act of writing a novel or a poem strikes a blow for democracy, because you’re talking about the sanctity of life, the sanctity of individuals. It doesn’t matter what the subject matter is . . . the essential thing is that you as a reader are entering the hearts and minds and souls of people you don’t know, who become real in the course of reading, and can affect your sense of the world.”

“That’s what books are. Books are not going to stop bullets from killing people, they’re not going to prevent people from going hungry, but they do feed other needs.

“We need stories,” he says. “Stories help us understand the world, in ways the world does not allow us to.”