Patient X: A paean to a past author that leaves readers disconnected 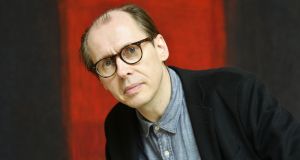 David Peace: displays a vast knowledge of the celebrated Japanese author, who killed himself in 1927, but has not fully managed to mobilise his research into narrative

On the banks of the Lotus Pond in Paradise, Buddha sees Christ kneeling beside the water, weeping, staring into the deep pool where he is watching the Japanese author Ryunosuke Akutagawa (1892-1927) being tormented in hell. Turning around, Buddha sees a spider spinning a thread on the top of a lotus leaf; he gently hands the thread to Christ, and watches as he lowers it down between the white flowers and through the water to Akutagawa, who tries to climb up it to Paradise, but eventually falls back to hell as his characters, his family, and his sins follow him up the thread. In this opening sequence to his 10th novel, David Peace (born in Yorkshire, but now living in Tokyo), drawing on Akutagawa’s 1918 story Kumo no Ito (The Spider’s Thread), begins his impassioned paean to one of Japan’s most famous 20th-century writers, who killed himself at the age of 35, shocking the literary world.

As the title suggests, Peace’s latest novel is a compilation, made up of 12 stories, told from different voices, in different styles, and moving across the entire span of Akutagawa’s life, from his childhood to his sojourns in England and China. It is deeply researched, offering six pages of bibliography at the end, and moving deftly between the shifting political and social tensions of the Taisho and early Showa periods, between changes in both Japanese and international life, and the literary work and “mental-scape” of Akutagawa himself.

He himself may have found the human core of the biography

This is a novel clearly born of a fascination, and it has much to offer; however, the depth of its knowledge is sometimes weighty, and there is a growing sense throughout that Peace has not fully managed to mobilise his research into narrative. He himself may have found the human core of the biography, but there is a distance in the writing, a formality, that makes it difficult for the reader to connect. One of the key difficulties here is the mass of facts at Peace’s disposal: he has clearly undertaken extensive research in Akutagawa’s stories, essays and letters, and couples this literary knowledge with a keen affinity with Japanese cultural and social history, but all this sometimes has the effect of confining the story, rather than setting it free.

Early on, the narrative addresses the protagonist in the second person, using Peace’s sensitive critical understanding of Akutagawa’s debt to Edgar Allen Poe to show that, in his estimation at least, a novel must be vitalised by poetry if it is to avoid slipping into “biography or history”. Indeed, Peace’s novel shirks traditional narrative and biography, approaching Akutagawa’s life through an accumulation of fragments, photographs, fables and folk tales, but it never seems to fully inhabit Akutagawa, leaving a distance between the protagonist and the reader, and between the protagonist and the other characters, that remains formal, even impersonal, through to the end.

Akutagawa, upon reading Poe, says such things as, “You have conquered, and I yield!” He uses “hitherto” in conversation, and “for” when he means “because”. At one point, a priest yells at him, “Get ye hence!” The formality of the archive, of the written text, is only rarely put aside, and we are left with a sense that Peace has yet to overcome the reverent distance between himself and his protagonist.

This is a touching scene, caringly rendered in some of Peace’s most sensitive prose

In one of the most accomplished tales which make up Patient X, “The Exorcists”, we see Akutagawa in the grounds of the Shunkoin Temple in Nanbanji, reaching out to touch the famous bell, fashioned by Jesuits before the temple was converted. This is a touching scene, caringly rendered in some of Peace’s most sensitive prose: “Ryunosuke reached out across the centuries, over the ocean of history, and touched the surface of the bell, his fingers warm and its metal cold, but in his mind, Ryunosuke could hear the ringing of the bell, sounding across the grounds of the Christian Temple at Nanbanji, calling the faithful to prayer, across the old capital of Kyoto, in his ears and in his mind, and in his heart, echoing in his heart, the chambers of his heart.”

It’s hard not to feel that this moment of touch, this ringing of prayer and community across a gulf of time, should work as a metaphor for Peace’s novel, but often the distance seems uncrossed, and the tactile presence of Ryunosuke is lost to us. It is only on occasion, leading up to the final, inevitable conclusion, that Peace’s writing succeeds in carrying the echo.

Patrick Freyne on Christmas ads: ‘No one belongs on the naughty list.’ This should be big news
4