Book review: The chapters of this sprawling volume do not cohere, yet there is much to be admired 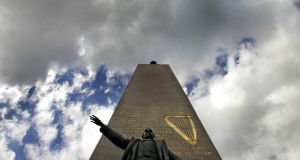 I am not quite convinced that the shadow of Charles Stewart Parnell covers quite as much as is suggested by Joep Leerssen, the editor of this sprawling volume, but he certainly cannot be accused of lacking the appetite to persuade the reader otherwise.

His melodramatic introductory essay robustly elaborates on the “the traumatic, undigested memory” of Parnell’s defeat and death in 1891 and the shadow it cast on Ireland’s transition to the 20th century because it “left Ireland with a Parnell-shaped hole in the middle, filled only partially by a Parnell myth”. Those nationalist politicians who came in his wake looked “puny in comparison . . . Parnell gone made it impossible to get over Parnell . . . almost like a big bang in reverse”. Steady on.

7 ‘Do I have to do everything around here?’ Irish women and the ‘invisible job’

9 Roy Greenslade and the IRA: I was his editor. His admission raises hard questions

12 Portrait of 1916 nurse ‘airbrushed from history’ unveiled in Seanad

15 Steady rise in number travelling further than 10km from home

30 TV guide: 20 of the best shows to watch this week, beginning tonight

32 Pandemic savings: How some people have saved thousands by working from home

34 Smother: This is what an Agatha Christie-themed Glenroe looks like

35 Ken Early: Klopp all at sea as Liverpool continue to flounder

37 Girl left scarred after falling into brambles at school secures settlement of €90,000

40 Stuff happens: Why you have so much household clutter – and how to get rid of it