Pachinko review: a masterpiece of empathy, integrity and family loyalty 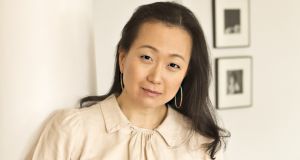 Min Jin Lee: a writer in complete control of her characters and her story and with an intense awareness of the importance of her heritage.

Earlier this year, I wrote about Yaa Gyasi’s debut novel Homegoing in these pages and praised the author’s use of time and generational discord to tell a story that combined politics, history and gender with page-turning appeal. The same compliment could be offered to Min Jin Lee, whose novel Pachinko was one of the most popular choices among writers offering their summer reading selections to The Irish Times.

Pachinko tells the story of Korean immigrants living in Japan between 1910 and today, a family saga that explores the effects of poverty, abuse, war, suicide, and the accumulation of wealth on multiple generations. When the novel opens, we are introduced to Hoonie, “born with a cleft palate and a twisted foot”, who enters into an arranged marriage with Yangjin and despite their age difference – he is 28, she is 15 – a mutual respect and affection builds between them, not least because of their shared love for daughter Sunja.

It is Sunja who will prove the most important character in the novel. As a teenager, she is seduced by a yakuza, Koh Hansu, leaving her pregnant and unmarried, but when a sympathetic young missionary asks for her hand, it seems her disgrace will be avoided.

One of the most endearing elements of Pachinko is how honourable most of the characters are. Husbands love their wives, children respect their parents. Even Koh Hansu, who has played fast and loose with the affections of a young girl, spends decades trying to help Sunja, and although she is dismissive of him in later life, their relationship remains one of the most intriguing in the book.

But for all the love scattered across the pages, there is hatred too. The monstrous degrees of hardship, disrespect and inhumanity suffered by the Koreans makes for painful reading. They live in impoverished circumstances, are paid less than their Japanese counterparts, are spoken to as if they were dogs and, in one powerful scene, are forced to register time and again as strangers in a land in which many of them have in fact been born. Lee writes of this maltreatment with a stoicism that reflects the fortitude of her characters. Surviving is what matters to them, not human rights.

As the generations continue, we are introduced to Sunja’s sons, Noa, studious and intellectual, and Mozasu, passionate but disinterested in education. The choices both boys make in their lives stand in stark contrast to each other but they pursue their goals with equal conviction, albeit with markedly different results. No spoilers, but suffice to say that as the boys’ lives diverge they arrive at opposing fates. Ultimately, the importance of family honour proves so strong that revelations from the past lead to the most heart-breaking tragedy.

Pachinko itself is a Japanese version of pinball and while pachinko parlours become the family business later in the novel, it also stands as a metaphor for the lives they lead. In a game of pinball, the initial strike of the ball against the flipper determines how the game will play out. For Sunja and her descendants, it is what happens at birth that determines their fate. Over the years they may bounce off the sides of the machine, ricocheting against the bumpers, kickers and slingshots, but there is a sense that fate has decided how their lives will develop from the moment the plunger hits the ball.

While Pachinko is only Min Jin Lee’s second novel – her first, Free Food for Millionaires, will be reissued later this summer – it is the work of a writer in complete control of her characters and her story and with an intense awareness of the importance of her heritage. In its generational sweep, it recalls John Galsworthy’s The Forsyth Saga, replicating some of that classic novel’s focus on status, money, infidelity and cruelty as it explores the effect of parental decisions on children, and the children of children. As Faulkner put it, “the past isn’t dead. It isn’t even past.”

This is a long book but is told with such flair and linguistic dexterity that I found myself unable to put it down. Every year, there are a few standout novels that survive long past the hype has died down and the hyperbolic compliments from friends scattered across the dust jacket have been forgotten. Pachinko, a masterpiece of empathy, integrity and familial loyalty, will be one of those novels.