‘Our house died. It was filled with life but it became empty. We were like shells of people’

Marie Newton (Toland) recounts her husband John’s murder, the intimidation that followed, the devastation it wrought on their family and her struggle to raise her children 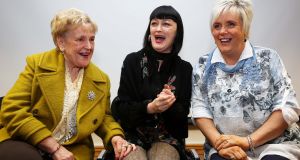 Marie Newton, left, musician and actor Bronagh Gallagher and Sharon Austin at the Beyond the Silence launch

My husband ran a pub called the Happy Landing. We had jumped at the chance of running our own pub, and John was determined to make a success of it. I’d been married at 19, and we had seven youngsters together. John ran the bar all day and I went down in the evenings to help him. We had a very busy, very happy life – the best life in the world.

That night, I wasn’t well and I rang John from home to say I’d not be in. He told me not to worry; he would call in one of the girls to work instead. At 6pm, I got the phonecall to say John was shot dead. It was a priest who had rang me. ‘Are you Mrs Toland?’ he asked, ‘John’s been shot – he’s dead.’ I thought someone was having me on.

When I talk about it now, I go right back to that very night and live every minute over again. They had shot the face off him. They had walked up to the bar counter and asked him, ‘Are you John Toland?’ ‘I sure am,’ my John said, and they just riddled him with bullets.

The lights went out in the village after they shot John – and so the car was able to speed out and away and nobody saw anything or knew anything. Eleven people were drinking in the bar that night, yet nobody saw a thing or gave any eyewitness statements. Did nobody notice these unmasked men coming in with guns? It was as if John was a nobody, that’s how I felt.

Straight away, the UFF claimed it through a local newspaper. They said it was because he was an informant for the IRA; that he ‘gathered information from intoxicated Protestants and passed it on to the IRA.’ It beggars belief. He worked all day and night and he hadn’t even a political thought. He was too busy for anything like that. We were just a normal, innocent, hard-working family.

We were only beginning our lives. If they’d only phoned and threatened him, that would have been enough – we would have given up everything and left. They didn’t need to kill him.

For a month afterwards, I got these phone calls in the middle of the night and I’d answer thinking it could be something urgent. A man’s voice would say, ‘Is that you, Mrs Toland? You’re a widow a week today – how does it feel?’ Then the next time, it was ‘You’re a widow two weeks now – how does it feel?’, then the next week, and the next, too. I phoned the police and they put a tracer on my phone, but never found him. I can still hear that voice today, though. And I’ve kept my phone ex-directory to this day.

Our house died. It was always filled with craic, life and laughter, but it became empty. We were like shells of people. Danny became the man of the house, and all the children took on a role and became responsible. They had to grow up fast.

John’s mammy went to pieces, and she died soon after. His death had a ripple effect, and that ripple doesn’t stop. His brother went into the River Foyle a few years later. I thought about killing myself, too, in the weeks after John died. Then I thought about my wains, and who would take care of them, and I got hold of my senses. That was the biggest hurdle I had to get over in my life. Everything was a hurdle that I had to get over.

Another of the big hurdles I had to get over was going to the cemetery all the time. I would go up there several times a day, sometimes in my nightclothes, and I had to get control of that.

Within weeks, we went from running a successful pub to being on benefits. Complete poverty. That was very hard, but it teaches you a lot about life. You can take anything on the chin after that – and that’s what’s important.

My children have never been back to the pub, but they are thinking about going there together at some stage, just once. Maybe they could have a drink in the Happy Landing to mark their daddy’s birthday, and you never know, I might go with them . . .

An extract from Beyond the Silence, published by Guildhall Press and available for download, from Amazon, priced 99p