As Yeats turns 150, authors John Banville and Colm Tóibín discuss the poem 'Byzantium' and why they chose it as their favourite 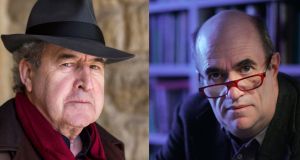 Why John Banville chose this poem
The earlier Sailing to Byzantium is better known, but Byzantium, dated 1930, is surely one of Yeats’s greatest poetic achievements. Although his occult and alchemical preoccupations, collected in that dotty compendium A Vision, are entirely risible, they served to inspire magnificent poetry. The fourth stanza of Byzantium, in particular, with its mysterious images of flame, spirit and entranced dancing, has the power to make the hair stand on end. It was Yeats’s gift to transmute the base metal of common words – look at the plainness of the vocabulary here – into pure gold. Great art such as this will never be beaten down.
John Banville’s new novel, The Blue Guitar, will be published in September
Why Colm Tóibín chose this poem
Mirroring Yeats’s great public poems are more powerful private poems, poems that come from the mind in reverie, from a haunted whispering voice, using imagery that is often dense with mystery. The world of Byzantium is a dream world that allows, nonetheless, great clarity of vision, moments of pure distinction and sudden realisation. The poem dramatises in ghostly tones the human spirit as its most desolate and grand and exalted. The power of its play between light and darkness, its forceful insistence on death as a sort of energy, depend on the poem’s high-toned music. The constant repetition, the certainty in the hard iambic beat in some of the lines, the insistence of taking the most abstract terms and phrases and making them seem real and concrete and true, add gravity and strangeness to the poem’s magisterial rhetoric.
Colm Tóibín’s latest book is On Elizabeth Bishop

The unpurged images of day recede;
The Emperor’s drunken soldiery are abed;
Night resonance recedes, night walkers’ song
After great cathedral gong;
A starlit or a moonlit dome disdains
All that man is,
All mere complexities,
The fury and the mire of human veins.
Before me floats an image, man or shade,
Shade more than man, more image than a shade;
For Hades’ bobbin bound in mummy-cloth
May unwind the winding path;
A mouth that has no moisture and no breath
Breathless mouths may summon;
I hail the superhuman;
I call it death-in-life and life-in-death.
Miracle, bird or golden handiwork,
More miracle than bird or handiwork,
Planted on the star-lit golden bough,
Can like the cocks of Hades crow,
Or, by the moon embittered, scorn aloud
In glory of changeless metal
Common bird or petal
And all complexities of mire or blood.
At midnight on the Emperor’s pavement flit
Flames that no faggot feeds, nor steel has lit,
Nor storm disturbs, flames begotten of flame,
Where blood-begotten spirits come
And all complexities of fury leave,
Dying into a dance,
An agony of trance,
An agony of flame that cannot singe a sleeve.
Astraddle on the dolphin’s mire and blood,
Spirit after Spirit! The smithies break the flood.
The golden smithies of the Emperor!
Marbles of the dancing floor
Break bitter furies of complexity,
Those images that yet
Fresh images beget,
That dolphin-torn, that gong-tormented sea.