From 1916 to the Troubles, the Famine to institutional child abuse, what we remember and what we choose to forget is worth studying 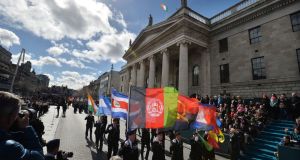 Members of the defence forces pass the GPO to commemorate the centenary of the Easter Rising in Dublin. Photograph: Alan Betson

The Decade of Centenaries is in full throttle. Numerous events have been or are being organised around the world to remember crucial junctures in Irish history which took place between 1913 and 1923. For the 1916 centenary in 2016, the Ministry of Arts, Heritage and the Gaeltacht was allocated a one-off sum of €49million. This contributed towards the organisation of what Minister Heather Humphreys labelled “a once in a generation series of events” – 4,500 in total, at home and abroad, both large official ventures and grassroots initiatives – to commemorate the events of 1916, particularly the Easter Rising.

The largest sum, €31million, was used to finance high-profile projects such as a new visitor centre at the GPO and the renovation of Richmond Barracks, to educate the people about the genesis of the Republic but mostly to attract tourists interested in the heroic founding myth of the Irish State and posters of the Proclamation. As the 2013 Gathering also demonstrated, Irish governments tend to see history as a means of speculation, giving it financial impetus in the hope it will deliver a handsome return on investment.

The 1916 centenary is perhaps the most important episode in the Decade of Centenaries. Compared to the 50th anniversary of 1916 in 1966, official commemorations have become more inclusive and less tinted by monolithic nationalist narratives (even if the major political parties have all tried to claim the Easter Rising). The digitisation of the Bureau of Military History archives has made widely accessible the stories of ordinary women and men fighting for Irish independence, and the role of women in the revolutionary movement more generally is receiving more attention. Likewise, public opinion regarding the role of Irish soldiers in the British army during the first World War has become less black and white, as people are becoming more attuned to the lived experiences and ambiguous position of Irishmen fighting for the British while a revolution was brewing at home.

These momentous changes in public history and collective memory and indeed the sheer scale of the Decade of Commemorations demonstrate the centrality of – or in Emilie Pine’s words, “obsession with” – the past and remembrance in the Irish and Irish diasporic political and cultural landscape. Our new collection, Irish Studies and the Dynamics of Memory, explores and theorises the importance of memory and history in Irish and Irish diaspora culture. While several of our contributors focus on the legacies of 1916-1923, our collection also explores the cultural longevity of other historical crises, including the Famine, the Irish revolution, the Troubles, and child abuse in Catholic institutions, and how they surface in different media.

Based on a conference financed by the European Research Council and held at Radboud University Nijmegen, the Netherlands, in 2015, our book builds upon our research projects on the cultural memory of the Great Famine and the role of tradition and modernity in the early years of the Dublin Gate Theatre.

In compiling this volume, our intention was not only to showcase the range of scholarship on Irish memory, but also to analyse different ways Irish culture has engaged with the issue of memory and to conceptualise such encounters. In this sense, we have taken our cue from the magnificent four-volume Memory Ireland series, edited by Oona Frawley of Maynooth University, a mammoth undertaking which constituted a quantum leap in the study of Irish memory. Extending the discussion initiated by Memory Ireland, our collection synthesises several trends in the field of Irish memory studies and features contributions which propose innovative ways of approaching the issue of memory, both academically and socially.

While our collection is wide-ranging and every article has its own merits, we would like to highlight a few contributions. In his essay, Guy Beiner, whose 2007 multi-awardwinning book on the folk memory of 1798 has been very influential, advances the notion of “disremembering”, an Irish way of “social forgetting”, to illustrate the tension between private remembrance and public silence, between memory and amnesia, in Irish culture. Beiner’s characteristically imaginative article develops an idiom to help us come to grips with this important aspect of Irish culture. A focus on the dynamics of disremembering enables us to scrutinise the operation of memory with regard to complex issues and events such as the Northern Irish Troubles and the Famine, whose legacies are often contested.

Emilie Pine’s contribution considers how the memory of institutional child abuse in the Republic can be mediated in such a way as to make audience members “witnesses” who engage actively with memory and thus promote social awareness and, ultimately, change. Analysing Mary Raftery’s play No Escape (2010), which is premised on the findings of the 2009 Ryan Report, Pine explores how documentary theatre can contribute to this project and give the memories of the suffering brought to light by the Ryan Report “a progressive social legacy”. Like Dawson’s essay, Pine’s chapter emphasises that “memory work” is not just an academic concern, but can have an activist purpose and may contribute to palpable social change.

In Ireland, the Decade of Centenaries continues to generate interest in the foundation narratives of the Irish nation. At the same time, Irish society is trying to come to terms with both historical grievances and traumatic episodes from the recent past. Moreover, recent political developments in Britain and Northern Ireland, which will also affect the Republic, also underscore that in many ways, history is never really past.

And in a world in which unreconstructed nationalism and overt xenophobia once again reign supreme, work which critically analyses and explains the workings and transmission of memory is more important than ever. Irish Studies and the Dynamics of Memory is our contribution to this crucial debate.