‘I write very early in the morning. I absolutely cannot write at night,’ says the MP whose Irish roots inspired her bestsellers 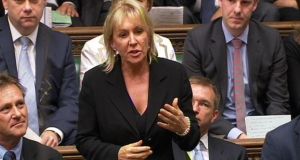 Nadine Dorries: “I spent time in the fabulous Museum of Country Life in Mayo when researching Hide Her Name and my third book, The Ballymara Road”

Although I read from a very young age, the first books to make a huge impact on me were written by Enid Blyton and the tales of the Famous Five. I remember crying at the end of Five Go To Smuggler’s Top. The adventure was over. I had to leave the five behind and re-enter planet Earth. I was distraught. I sat throughout on a chair by the fire, with my fingers in my ears to block out the noise of daily life around me and I left my life and all that came with it, to another time and place and it was as if I was truly there, alongside them all. Over the years I have read less than complimentary comments made by literary reviewers about Enid Blyton and it infuriates me. She made my childhood a better experience than it would have been without her books and for that, I shall always defend her. I didn’t just enjoy her books, I loved them.

I have become a fan of Colm Tóibín having just finished Nora Webster. However, I have also become a historical fiction groupie. I just can’t get enough. Hilary Mantel’s Wolf Hall and Bring up the Bodies were magnificent, even though I may not entirely agree with her recreation of Thomas Cromwell.

I love the personalisation of inanimate objects and play around with the concept in my own work. My absolute favourite quotation from a fictional book comes from Hilary Mantel’s Wolf Hall. “It was night, Wolsey was in his apartments and Thomas Cromwell was in attendance. The candles burnt… and dipped a bow ……” I would give anything to have written those words.

The new Irish author hitting the scene is Mary Costello. She is and will be underrated because frustratingly, she will be compared to Colm Tóibín, which, I believe, largely detracts from what is her own unique brilliance. Academy Street is her debut novel. A poignant portrayal of a woman born in Irelandwho emigrated to New York. For me, it was a deeply painful and sad book and yet, extremely addictive.

I read in two forms, the printed version, which I far prefer, or audio. My three-hour commute each day to and from Westminster means I can use what used to be dead time to listen to my books. I don’t think it is an exaggeration to say that audio books have transformed my life. It is interesting that I cannot edit my own books on screen. I only hear the voices of my characters when I read them back from paper so all my editing is done on paper manuscript and if I read, I only do so from paper.

The most beautiful book I own has to be a gorgeous leather-bound Bible recently given to me by a dear friend.

I write very early in the morning, usually from about 6am for two hours, and if I’m lucky, I may find an hour in the early evening when we are awaiting votes in parliament and I am trapped near the voting lobby. I gorge on writing at the weekend. I absolutely cannot write at night and I have learnt that there is no point in even trying.

I spent time in the fabulous Museum of Country Life in Mayo when researching Hide Her Name and my third book, The Ballymara Road. It was also necessary for me to read a huge amount of literature regarding the convent laundries/mother and baby homes and the architecture of containment, which existed in Ireland and allowed generations of young Irish women to simply disappear. This was especially relevant to me as many of those girls were from the country and from poorer backgrounds. Similar backgrounds to that of my own Irish grandmother, Nellie Deane.

For the 18th birthday of a friend’s child, I would try to find the most elaborate copy of the complete works of Shakespeare and a similar boxed set of the Harry Potter books.

I wish I had read Anne of Green Gables when I was young. I still haven’t and perversely, I never bought it for any of my three daughters. I will make sure that I have a copy to read aloud to a granddaughter and then I can tick it off the list.

Reviews are a nightmare. A critic from the Daily Telegraph wrote that my first book was the worst thing he had ever read and yet reviews from the other newspapers were glowing and readers are so kind. God bless Mark Hennessy of The Irish Times who wrote “imagine Angela’s Ashes in a Scouse accent” – that was the review I enjoyed the most. Whether or not you enjoy a book is a hugely personal thing: one man’s nectar is another man’s poison. When I buy a book, I open it, I randomly read a page or two and if it interests me, I buy it. I find reviewing other writers difficult. I would never be critical of another person’s work because I know that would personally hurt the writer as an individual. It just isn’t something I want to do.

A Visit from St Nicholas / Twas the night before Christmas was my favourite book to read to my children. All in one bed in their special Christmas Eve pyjamas and scrubbed faces, eyes bright with excitement. That was the book I enjoyed reading to them the most.

If I could host a dream dinner party of dead writers, I’m afraid most academics would find it a boring party. I would invite Maeve Binchy and Catherine Cookson. I enjoy writing family sagas and they are the undisputed queens of that genre. I would lace them both with their tipple and then extract as much information and advice as I could. I imagine them both to have been funny and clever as well as sharp businesswomen. Yes, a dinner with both of those great authors of a form of literature so many women love would be something to cherish.

Nadine Dorries’ second novel Hide Her Name was published last month by Head of Zeus. Dorries is Liverpool Irish and she spent childhood summers with her extended family on the west coast of Ireland. She trained as a nurse, ran a school in Zambia and founded a childcare business. She has been a Tory MP for Mid-Bedfordshire since 2005. @NadineDorriesMP