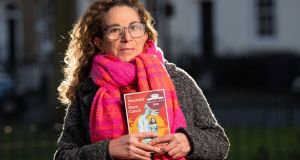 Monique Roffey, winner of the 2020 Costa Book of the Year for her novel, The Mermaid of Black Conch. Photograph: Ian Gavan/Getty Images

Monique Roffey has won the £30,000 Costa Book of the Year award for her “utterly original” novel, The Mermaid of Black Conch: A Love Story ( Peepal Tree Press).

Roffey’s sixth novel, a dark love story between a fisherman and a mermaid, had been turned down by several major publishers and she also successfully crowdfunded a PR campaign for her book. Jeremy Poynting, founder of Leeds-based independent Peepal Tree, said it would now publish another 20,000 copies.

“It is utterly original—unlike anything we’ve ever read—and feels like a classic in the making from a writer at the height of her powers. It’s a book that will take you to the furthest reaches of your imagination. We found it completely compelling.”

The Mermaid of Black Conch had already been on the Goldsmith Prize shortlist has been longlisted for the 2021 Rathbones Folio Prize.

Roffey said: “I’m delighted with this win. The Costa Book of the Year boasts an impressive lineage of contemporary writers, and I’m proud to be the latest addition to this list. This prestigious prize is a vote for so many things: Caribbean literature, experimental form, magical realism, independent presses, and of course, mermaids. A huge thank you to the judges for exposing my book to a wide readership. I’ll be pinching myself for weeks to come.”

The Costa shortlist included category winners Lee Lawrence for his memoir, The Louder I Will Sing: A Story of Racism, Riots and Redemption; Ingrid Persaud for her first novel, Love After Love; the late Eavan Boland, posthumously nominated for her final collection, The Historians; and children’s author Natasha Farrant for Voyage of the Sparrowhawk.

ILFDublin has announced a special Off The Page event with Kazuo Ishiguro in conversation with Sinéad Gleeson on March 12th, at 7.30pm to mark the publication of Klara and the Sun, his first novel since receiving the Nobel Prize for Literature. Tickets are on sale from ilfdublin.com

The 2021 International Booker Prize longlist will be announced on March 30th, followed by the shortlist on April 22nd and the winner on June 2nd.

The work of translators is identically rewarded, with the £50,000 prize divided equally between the author and the translator of the winning entry.

The 2021 panel of judges is chaired by cultural historian and novelist, Lucy Hughes-Hallett, and consists of: journalist and writer, Aida Edemariam; Man Booker shortlisted novelist, Neel Mukherjee; Professor of the History of Slavery, Olivette Otele; and poet, translator and biographer, George Szirtes.

The Booker Prizes are sponsored by Crankstart, the charitable foundation of Sir Michael Moritz and his wife, Harriet Heyman.