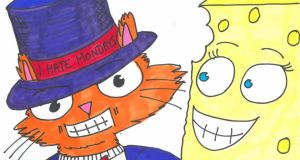 His plan was to steal the starfish from the pet shop, which could grant any three wishes.

He wanted to get it so he could put an end to Mondays and Tuesdays with his best friend, Laura the Parmesan cheese.

“I hate them because Cappuccino Bob’s doesn’t open on a Monday or Tuesday and I need my coffee,” replied Bob. “My mam visits every Monday and Tuesday as well.”

Laura was traumatised by Bob’s mam because she had turned Bob’s cousin into the hat he was wearing.

“Since your mam is so horrifying, I will help you get the starfish that turns into a dancing kettle.”

Laura walked in normally, before knocking over a fishtank. The water disarmed the CCTV, which made an electrical noise and shut it down.

Bob followed Laura in and spotted a Wanted poster with his name and face on it at the counter.

“Quick! Get down,” said Laura, pointing at the ground.

Just then, the shopkeeper walked out and saw Bob crying. “Why are you crying on the ground?” he said curiously. “Wait! You look familiar. I recognise you.” The shopkeeper squinted at Bob and then looked over at the Wanted poster.

In the meantime, just five seconds earlier, Laura had drawn a moustache on the Wanted poster with a sharpie marker. The shopkeeper stroked his beard in contemplation.

“Hi, I’m that guy in the Wanted poster’s twin brother, except I don’t have a moustache,” explained Bob to the shopkeeper, while looking over the shopkeeper’s shoulder at a large box marked “DO NOT TOUCH: MAGIC STARFISH”.

Bob felt excited. He knew he had to make a run and grab the starfish, but instead, as he ran towards the box, he slipped on the water that Laura had spilled earlier on. Bob flew twelve feet into the air and miraculously landed right beside the big box that contained the magic starfish.

Before he grabbed the starfish, Bob needed to distract the shopkeeper. He spotted Laura creeping up behind the shopkeeper with a cappuccino. Bob’s coffee instinct kicked in and he pounced towards the cappuccino, accidentally knocking over the shopkeeper.

Laura was feeling invincible in a cheesy way, so she took out her iPod and played Call Me Cheesy at top volume. As soon as Bob heard the music, his inner tap dancer came out and he tap danced over the shopkeeper and out of the shop, tossing the top hat in the air and catching it on his head.

When he stopped tap dancing and took his hat off to bow, he realised the starfish was inside! He was amazed and felt powerful because, finally, he was going to get his three wishes.

Bob took hold of the starfish carefully, and began to make his first wish. “I use your mystical powers to banish Mondays and Tuesdays forever!” A pink glow came from the starfish, and suddenly it was Wednesday. Bob was delighted!

For his second wish, he said, “I use this wish to transform my cousin back to his original feline form.” A pink glow came from the starfish and when Bob looked up, his cousin was sitting on his head, no longer a top hat.

Just as Bob was about to make his third and final wish, he spotted something in the distance. A parachute was coming towards them, and Bob recognised the shape of his mother. Both Bob and Laura gazed in horror as the mother landed in front of them.

Bob’s mother grabbed the starfish and wished for Bob to turn into a bowler hat, but little did she know that the third wish always did the opposite of what you wished for.

The starfish glowed magenta this time, and right before Bob and Laura’s eyes, the mother became a bowler hat.