Damon Galgut’s new novel could easily be yet another work of lightly fictionalised biography, yet it is far more than that 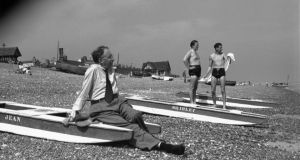 Long regarded as of one Britain’s major literary figures, Edward Morgan Forster wrote six novels, including Howard’s End (1910) and his masterpiece, A Passage to India , which was published in 1924. Forster was a Victorian, born on January 1st, 1879; he would live until June 1970, dying at 91. His was a long, sad and lonely life, dominated by his many doubts about his work. The harshest test he faced was a struggle to find love, never mind express it, in the Edwardian society of his early life. All of which makes the courage and despair that resulted in Maurice , written in 1914 but posthumously published in 1971, as Forster requested, all the more poignant.

Among literature’s most enduring lost opportunities is Forster’s novel Arctic Summer , which he began in 1909 yet never finished. The gifted South African writer Damon Galgut, now 50, brings his extraordinary feel for the personal to this beautiful narrative, a homage to Forster; he even succeeds in evoking a sense of the British master’s oblique style.

Galgut is a sensitive original. Arctic Summer could easily be yet another work of lightly fictionalised biography, yet it is far more than that. Galgut has explored the inner life of the mild and quietly tormented Forster with a rare insight. It is the sense of longing that makes this novel remarkable, as well as the way Galgut slowly plots Forster’s emerging impatience to express his forbidden desires. Above all, Galgut ensures that the reader shares the emotional hell that Forster experienced from the moment he first laid eyes on an exotic Indian aristocrat named Syed Ross Masood.

It happened in 1906, when Forster, a Cambridge graduate and by then 27, was asked to give Latin lessons to a young man eager to study law at Oxford University. Masood was handsome, charming, incredibly self-confident and, even then at 17, given to making grand pronouncements, such as: “My dear Forster, all Englishmen are Christians. It is very sad. The English are a tragic race. I feel deeply sorry for them. I would like to help them, but they are too numerous; there is nothing to be done.”

Galgut conveys the playfulness of their initial exchanges, and before long it is obvious that they are friends. But Forster loves Masood with an intensity that the younger man cannot return, and the genius of this novel, which could well be one of the finest literary works published this year, lies in Galgut’s exploration of the agony of unrequited love. The point is made that every man Forster loved would eventually marry a woman.

Forster, who was referred to as Morgan by all who knew him, with the exception of Masood, carried the grief of rejection as if it were a ball and chain. He never avoided hurt – and, in the case of Masood, openly pursued it. Galgut, who has done his research, includes three pages of acknowledgments in which he expresses his debt to PN Furbanks’s majestic two-volume E M Forster: A Life (1977 and 1978), one of the best literary biographies. Yet Galgut writes so well that the factual material neither stifles the admittedly real-life characters nor distorts their dialogue.

Masood is fascinating. He loves Forster, but not in the same way, and he assures the uncertain author that he will write a book that will become A Passage to India : “From the very first moment I met you, I knew that there was an Englishman who didn’t see the world like the rest of his countrymen. You don’t realise it, but you have an Oriental sensibility. That is why the book you’ll write will be unique. It will be written in English, it will seem to be from English eyes, but its secret view will be from inside.”

At all times Forster retains our sympathy as he suffers repeated humiliations as the flamboyant Masood becomes increasingly emotionally detached and thoughtless. As the novel opens Forster is aboard ship, travelling through the Red Sea, en route to India and a reunion with Masood. Galgut introduces the theme of homosexuality in the opening pages and makes clear the fear that stalked such men, still aware of Oscar Wilde’s recent ordeals. Forster is by then a published writer and part of the Bloomsbury scene, but his literary achievements fail to balance his personal anxieties.

Once the action moves to India Galgut writes with a vivid sense of place. The sheer physical drama of India and its people, bustle, landscape and sharp sunlight are even more alive to the reader because poor Forster appears less aware of them as he becomes increasingly desperate. In one of several heartrending scenes Forster lunges at Masood. “Even if he’d been able to speak, he could not have said what he wanted. But yearning had made him lean towards Masood, trying to kiss him. In the fizzing white burn of the lamp-light, his friend’s face had been at first astonished, and then shocked. His hand came up sharply, to push Morgan away, and that little movement had felt enormous, a force that could move a boulder . . . He did not feel as Morgan did: that was all. There was nothing else to say.”

Forster’s father died when the future writer was barely two, and he was raised by a mother who spent her life caught in a state of regret that was further aggravated by chronic rheumatic pain. While in England, Forster lived most of his adult life with her, right until her death, at 90, when he was 66. He worked in Alexandria for the Red Cross, attempting to find information about missing soldiers, and held administrative posts in India. While in Egypt he became involved with a tram conductor. Again this is very moving. Galgut confers the same ambivalence on Mohammed as he does on Masood. This ensures that both characterisations are three-dimensional and never sentimentalised.

Admittedly, this novel draws on extraordinary material; the tragic life of Forster, who had much in common with Henry James – and, in fairness to Colm Tóibín’s The Master (2004), with which it has similarities, it is a more appealing book, possibly due to the depiction of Forster’s emotional chaos. There is also the backdrop that Galgut draws in, the end of empire and the shared animosity of the British colonialist and the resentful natives.

Galgut’s emotional intelligence has made him a great writer. He has moved on from his superb reading of post-apartheid South Africa, The Good Doctor (2003) and The Impostor (2008), as is evident from his eerily beautiful quest sequence, In a Strange Room (2010). Twice Man Booker shortlisted, Galgut shares the eloquent urgency and exactness of his Nobel-laureate countryman JM Coetzee.

In Arctic Summer Galgut has written a very different book, a traditional novel. It looks at a man battling with a need for love and ongoing personal rejection, who is also pursuing the equally lonely path of an artist. “EM Forster,” wrote the esteemed American critic Lionel Trilling in his 1943 study, “is for me the only living novelist who can be read again and again and who, after each reading, gives me what few writers can give us after our first days of novel-reading, the sensation of having learned something.”

Damon Galgut, among the finest living writers, has not only given life to a quiet enigma who suffered in love but looked at the inspiration and need that helped that enigma write six major novels.