Michael Collins: The Man and the Revolution review – A knotty subject expertly unpicked 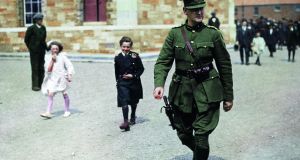 Book Title:
Michael Collins: The Man and the Revolution

In his entry on Michael Collins for Cambridge’s Dictionary of Irish Biography, published in 2009, the late historian Michael Hopkinson concluded: “Through all the speculation, hero-worshipping and revisionism, Collins can still be regarded as the essential man in the winning of a large measure of Irish independence.”

This book is a robustly demystifying account of Collins and his legacy, which skilfully dissects such speculation, hero worshipping and revisionism; it also wonders, searchingly and provocatively, why we still “need him to be great” as it takes us through numerous strands of his life and legacy. Murphy and Dolan are two of the most talented historians of their generation; they ponder, parse and then pounce on the back of impressive research and can be gloriously irreverent but do not lapse into cynicism. This combination makes for an absorbing book of impressive originality and depth. The quality of the stylish, spiky prose is also noteworthy, though it does occasionally become overwrought and indulgent.

This is not another biography of Collins; instead the authors have unpacked him through the exploration of key themes: his administrative and military methods; his practice of politics; his beliefs and celebrity; and then his death and afterlives. The range of documents and photographs reproduced is another strength of the book, allowing readers to see for themselves how Collins and his contemporaries enunciated the themes covered. That wider casting of Collins is crucial; despite the contention of Arthur Griffith during the Anglo-Irish treaty debates that Collins was “the man who won the war”, and the blather and bravado that have sometimes been a part of the annual August speeches at Beál na Bláth, where Collins was killed in 1922, he was not a one-man revolution. This book is a detailed reminder that he makes little sense “without the context of the people who surrounded him” – a crucial point given the tendency to see him “as the sum of the Irish revolution”, which has reduced him to “a caricature of his many parts”.

Collins was aware of the power of his image, and his own acceptance of some of the wilder claims made about him “may have been one of his more considerable flaws”, but he was his own hardest taskmaster from an early stage. Much of the work he was involved in after the 1916 Rising with the Irish National Aid and Volunteer Dependants’ Fund was mundane – “for the most part he wrote letters, day after day, week after week” – and he was always frustrated with those who were, in his own words “excellent in theory bur rather weak in practical details”. He expressed the belief in January 1920 that “people who are very busy are never so busy that they cannot do something extra”.

For him, pen-pushing and administrative efficiency was an extension of battle, and his exasperation with tardiness compelled him during the War of Independence to continually stray beyond his ministerial brief of finance. The authors have highlighted, for example, a large body of neglected correspondence in the archive of the underground Irish republican government that documents his attempt to manage the Dáil’s relationship with its representative in London, Art O’Brien. But Collins was also prone to lapses in discipline, as when he arrived at Wormwood Scrubs prison in London in October 1921 to visit prisoners, drunk and boasting.

Collins had a “rudely functional approach to killing”, but he did not conceive and “work” the Squad, who carried out executions to try and scupper the British intelligence system in Ireland, alone. The brutal methods of warfare he sanctioned amounted to “terror in its fullest sense”. While he wore numerous hats; minister for finance, director of intelligence for the IRA, president of the supreme council of the IRB, and was an impressive leader, his stature was also magnified by the failings of his enemies. He could also trust too easily, meddled too much and with regard to the IRA he did not have an iron grip but rather “flashes of limited control”. There were those, such as leading Cork IRA figure Tom Barry, who hailed him in public but criticised him privately as “he never shot a man in his life”.

As one of the “reluctant” negotiators of the Anglo-Irish treaty, Collins could be either forensic or belligerent depending on the circumstances, although the choreography of reaching the deal in December 1921 might have been teased out more by the authors. Collins was a “formidable” politician, constantly calculating but not a team player and prone to melodrama. What he actually believed is difficult to discern and strangely neglected by his biographers. Since his death he has been recruited to countless causes, but he was not a deep thinker. He was derivative in his meanderings on the idea of an Irish “nation” and aped the sentimental mush about the western seaboard beloved of his generation despite all the guff pedalled about Collins as the great “moderniser”.

He did not subscribe to a particular social or economic ideology, and his religious practice appears to have been driven by pragmatism. As to his authoritarian tendencies in the aftermath of the treaty and during the civil war, when he was chairman of the provisional government and then commander-in-chief of the Free State Army, the authors are somewhat sceptical of the accusation that he was contemptuous of democracy. Some of his colleagues voiced their concerns about the lack of priority he attached to government meetings, but Collins, like them, continually sought to frame his pro-treaty arguments in relation to the importance of a democratic mandate.

Such was his celebrity that in January 1922 at a fancy dress party in a small village outside Burnley in Lancashire, one child attendee dressed as Collins. Living up to his reputation “may have even cost him his life”; this was what De Valera had referred to in January 1921 as “your fame or notoriety if you prefer it”. Collins was offered huge sums for his memoirs (£10,000 in one case) though his stardom irked his enemies including Ormonde Winter, Britain’s former director of intelligence in Ireland: “the fuss the English papers make about him makes me vomit.” The fawning journalism was also mocked by Constance Markievicz: “I also heard that Princess Mary is to be married to Michael Collins,” she commented sarcastically in the Dáil.

A chapter is devoted to Collins’s death, highlighting how immediately afterwards the myth-making was in full flow, with a statement from army headquarters suggesting “forgive them” were his last words. The reality of the circumstances of his death – the worse for wear with drink and making a stupid military blunder by stopping to return fire – took second place to the conspiracy theories (many motivated by spite) and other imponderables .As is observed laconically, “an ordinary death just would not do”. The anti-treaty side’s response to his death was mixed; some were vexed by the purple prose of the eulogies, but for many soldiers and politicians “this was also a very private kind of loss”.

As to his afterlives, authors of books, plays and memoirs as well as filmmakers posited the Collins they needed and he “endured in all the ways we wanted him, far more than any other figure from that time”. Part of the need to understand him, it is argued, is to accept that the imagined Collins matters as much as the real one. This book cleverly does justice to both.

The Fight for Irish Freedom: An Illustrated History of the War of Independence

Michael B Barry now has a trilogy of books that illustrate the Irish revolution under his belt. This packed collection follows photographic histories of the 1916 Rising and Civil War. In the region of 650 photos are used here, in chronological order, and they offer a compelling and textured overview of the period, sourced from various British and Irish archives, museums, periodicals and newspapers. It is asserted “many have never been published before” but more detail on that would be helpful; it would also be better if the sources of the photographs were given in the accompanying captions.

In addition to the photographs there is the welcome inclusion of some paintings, posters, cartoons and archival documents, as well as some contemporary photographs alongside a few newly created maps, but there is too much included on some of the pages, and the reproduction of some of the documents as a result is on too small a scale for them to be easily readable. The book does, however, do justice to a multilayered revolution and its manifold visual representations. Barry’s admirably wide range of sources means there are a host of images here that are dramatic, arresting, distressing and even playful, and it is a very reasonably priced book given its density, variety and originality.

Diarmaid Ferriter is professor of modern Irish history at UCD and an Irish Times columnist. His new book, On the Edge: Ireland’s Off -Shore Islands: A Modern History, is published by Profile Books