Margaret Thatcher: the Authorised Biography. Volume Two: Everything She Wants 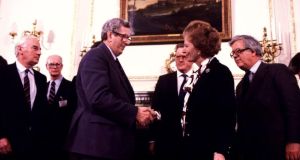 Margaret Thatcher has been as lucky with her biographers as she was with her enemies. Her governments returned Britain to levels of unemployment it hadn’t seen since the 1930s and presumed it would never see again, yet she was able to win three elections on the trot – at a canter, even – because her opponents pursued policies and chose leaders, local and national, that rendered them effectively unelectable for more than a decade. She fought and won a risky war thousands of kilometres away, in the south Atlantic, because the Argentinian junta that provoked the conflict ultimately lacked the stomach, the skill and the resources to finish it.

And, much closer to home, she defeated a year-long strike by the National Union of Mineworkers at least in part because the strikers were led by an egotistical ideologue who was too scared to ballot his members, who refused to countenance any deal that involved the closure of a single pit, and who made it crystal clear what he really wanted to do was to bring down Britain’s democratically elected Conservative government.

Thatcher’s biographers are a rather more impressive bunch than Michael Foot, Gen Leopoldo Galtieri and Arthur Scargill. First came the Guardian’s Hugo Young, whose One of Us must rank as one of the sharpest and most sustained critical indictments ever written of a living politician. Then came the rather more dispassionate yet equally impressive The Grocer’s Daughter and The Iron Lady, by John Campbell. And now we have Everything She Wants, the second part of what its author, Charles Moore,the former Spectator and Telegraph editor, has now decided will be a trilogy.

Everything She Wants picks up from where Moore’s first volume, Not for Turning, left off, in 1982 and takes the reader up to 1987, the year of her third (and, it turned out, final) election victory. It is a big book, in every sense of the word, taking more than 800 closely written, impeccably footnoted pages to cover both domestic and global politics and the relationships that shaped them, and managing to combine the weight of authority with seriously page-turning prose. Its author may claim that his decision to go for three rather than just two volumes at least means that this middle one “will not be too heavy to read in bed”. But on this – and this alone – you cannot trust him: let’s just say that if you’ve not yet considered a Kindle – “other ereaders are available” – now would be very a good time to do so.

Moore could not, of course, have produced such a doorstop all by himself. Indeed, he endearingly takes great pains to stress how fortunate he was not only to be able to speak to anyone and everyone who had a part to play in his tale but also to be able to rely on the services of a team of top-notch researchers to assist in what in any case must have been a Herculean task.

As a result the book triangulates superbly between official sources, first-hand accounts and previously published material, with particularly good use of the often hand-annotated material stored (much of it digitally and free to view on the web) at the Thatcher Archive – a fascinating resource that ended up in Cambridge rather than in Oxford after academics at Lady T’s alma mater upset her more than she would ever admit by famously (some would say pettily) denying her the honorary doctorate that had been awarded as a matter of course to her predecessors.

Coherent whole It is one thing, however, for a biographer to have all the material he or she could possibly need and quite another to weave it into a coherent whole – something Moore achieves by not sticking slavishly to a strictly chronological approach. Instead he devotes chapters or parts thereof to particularly important themes or episodes.

One of those singled out for special treatment is the Irish question. Although he might perhaps have done more to explain precisely why it was the case, Moore is right to remark on how extraordinary it was that the IRA’s bombing of the Grand Hotel in Brighton in 1984 not only failed to derail but failed even to appreciably delay progress towards what became the Anglo-Irish Agreement. And for an avowed unionist he gives what many (perhaps even most) would consider a balanced account of the tortuous negotiations that led to the latter, all without glossing over the obduracy, ignorance and insensitivity that she all too often displayed in her dealings with the Republic. Moreover, his conclusion is both balanced and convincing: Thatcher, it is true, allowed her civil servants to take her further than, in her heart of hearts, she would have wanted to go, but “it would be absurd”, he writes, to argue that she was their prisoner, “and paranoid to suggest that they cheated her. She was too formidable for that. She was reluctant, but not deluded. She felt she had to do something and she allowed herself to be persuaded of the likely benefits of most of it. The subject did not matter to her so much that she was prepared to fight to what would certainly have been a bitter end”.

What mattered to Thatcher much more, clearly, was the UK’s relationship with its most powerful ally, the United States, to which Moore quite rightly devotes a good deal of time and space, choosing (as she herself sometimes did) to view it primarily through the lens of her relationship with her ideological soulmate Ronald Reagan. Moore’s access-all-areas pass to key sources on both sides of the pond allows him to provide the reader with enthralling, blow-by-blow accounts of some of their most controversial moments, most obviously Reagan’s insistence that Thatcher allow the UK to be used as a base for bombing the Gadafy regime in Libya and his decision to go ahead with the invasion of Grenada, a Commonwealth country, without due consultation.

Jarring note Moore’s gloss on the latter spat, incidentally, strikes what is the only slightly jarring note in his book’s otherwise admirably sensitive attempt to deal head on with the fact that Thatcher was a woman operating in what was then, even more than it is now, a man’s world. She was, he tells us, “as disappointed as a two-timed girlfriend . . . She felt she had been made a fool of. For a proud woman who had a slightly old-fashioned view of the relations between the sexes, this experience was even more mortifying than it would have been for most men.” Really?

A more determinedly feminist reading of the text may find other passages in the book equally problematic, not least those relating to the role that flirtation played in her meetings with other leaders, particularly François Mitterand and Mikhail Gorbachev. In Moore’s defence, however, this was how their interactions were frequently characterised by those who witnessed those meetings first hand, be they politicians, civil servants, advisers or interpreters. And it is those first-hand accounts that enable him to reconstruct some of most vital encounters in 20th-century world history in such gripping fashion, her jousts with Gorbachev being the best but by no means the only example: Moore’s handling of Thatcher’s fierce determination to make the best of a bad hand on Hong Kong, her controversial refusal to go with the flow on sanctions against apartheid South Africa, and her seemingly genuine concern for working miners and their families are no less fascinating. He even manages to make European summits exciting.

For those heavily into British politics the book is, predictably, a beautifully crafted (and for the most part pretty balanced) Tory treasure trove. Moore seamlessly synthesises a huge amount of what we already knew, or suspected we knew, with some genuinely new material.

It is difficult to imagine, for instance, anybody bettering his account of the Westland affair, which eventually cost Thatcher two ministerial resignations (including that of her eventual nemesis, Michael Heseltine) and, Moore confirms, may well have cost her the premiership had her civil servants not fought successfully to ensure that their junior colleague at the heart of the matter, Collette Bowe (to whom Moore managed to speak), was not called to appear at a crucial Commons committee hearing.

Moore’s sometimes hilarious account of the stresses and strains behind the scenes of the Tories’ superficially effortless election victories in 1983 and 1987 likewise adds new nuggets and insights to what, for political junkies anyway, may already be a familiar tale. We knew, for instance, that Thatcher was far more worried than, in hindsight, she needed to have been about the outcomes of those contests, but we didn’t know that she was quite as insecure – indeed, borderline hysterical at one point – as she appears in Moore’s narrative. We also knew that her relationship with Norman Tebbit, something of a Thatcherite icon himself, deteriorated markedly during the 1980s, but we didn’t perhaps know quite how badly or how early the rot set in.

In the end, though, this biography will, like any other, be judged on how well it captures the essence of the woman at the centre of the maelstrom. On these terms alone the book is a triumph. Moore does this cumulatively, building layer upon layer upon layer so that we gradually come to understand Thatcher through her own words and deeds. He does it explicitly, entering the narrative now and then to explain and amplify in the authorial voice what, for example, Thatcherism came to mean to her and the way in which her sometimes simplistic reading of British history drove her to remake the nation’s future.

And he does it by quoting other voices when, notwithstanding his own considerable gifts, they say it better than even he can. David Goodall, one of the civil servants so instrumental in negotiating the Anglo-Irish Agreement, speaks for many of us, and maybe even for Moore himself, when he says of this most remarkable of politicians – indeed, this most remarkable of women – that he “liked, admired, and was repelled and exasperated by her in about equal measure. In retrospect, however, and on the whole, the admiration predominates.”

Tim Bale is professor of politics at Queen Mary University of London, author of The Conservative Party from Thatcher to Cameron and The Conservatives Since 1945, and editor of Margaret Thatcher: Critical Evaluations