The selection is playfully perverse, not to mention the failure to elevate Mike McCormack and Sebastian Barry to the shortlist 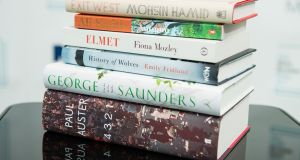 Think of that old showbiz adage, “leave ‘em laughing” and then consider this year’s Man Booker prize shortlist, which suggests a hint of “how about leaving them confused?”. Few of the many bewildered observers assessing the finalists, three men and three women, could accept that there is anything straightforward about the selection, which may best be described as playfully perverse.

On the positive side, one of the most appealing – and profound – works to be published in English this year, the plaintive Lincoln in the Bardo, by American short story maestro George Saunders, has, as expected, made the final six, and enters the final lap as overwhelming favourite.

Based on the real-life tragedy suffered by Abraham Lincoln, the death of his son Willie, it is a beautiful and daring long-form debut which stands in its own right as an extraordinary literary achievement drawing on many devices, most notably a chorus of voices.

There are echoes of Máirtín Ó Cadhain’s classic Cré na Cille, as well as William Kennedy’s Ironweed. Saunders explores the limbo period spent in death’s waiting room. Not only is there the obvious satirical resonance of Lincoln’s plight of loss endured being mirrored in the current agony of many Americans faced with a country they no longer know, but Lincoln’s earnest repression as a foiled Orfeo does juxtapose itself rather magnificently against the wilful, offensive behaviour of the current incumbent.

Anyone possessed of a sense of humour will smile at the inclusion of US heavyweight veteran Paul Auster with 4321, a bulky work best described as worthy and a lifetime’s personal statement. Repetitive and unconvincing, it is laboured in the extreme and while it was a surprise to see it on the longlist, its inclusion on the shortlist is a shock. So unlikely a contender as this must be the one to wager your house on; the odds will enable you to purchase several more.

Taking displacement as its theme, Moshin Hamid’s Exit West, about a young couple caught up in the migration crisis, is stylistically slight, yet impossible to ignore. The biggest problem with Exit West lies in the lame characterisation. Hamid, who was previously shortlisted in 2007 for The Reluctant Fundamentalist, is calm and deliberate, in control of material handled with an allegorical approach, similar to, though in no where as skilled as South African-born, now Australian naturalised JM Coetzee, who won the 1983 then Booker with Life & Times of Michael K – still one of the finest winners. If Exit West appears passionless – which it is – Hamid’s polemical intent assisted by an ongoing human exodus, persuades one of the importance of his message, if not quite sufficiently to view the narrative as more than concerned rhetoric. Hamid’s humanity is unlikely to snatch the prize while his concerns will impress far longer than Man Booker debates will continue.

Also caught up with the history of the moment, albeit far less painful is Man Booker veteran Ali Smith with Autumn, which is being billed as the first Brexit novel. A hasty, reflexive quality underlines a communal story. Smith, a Scot, is always engaging, wry and sincere, a commonsensical voice in the wilderness of much current literary fiction in English. In ways her inclusion partly compensates, if only partly, for the disappointing Man Booker response to Bernard Mac Laverty’s Mid-Winter Break, a superior work which shares Smith’s subtle humanity.

At the time of the long listing back on July 27th it is true that American Emily Fridlund’s History of Wolves seemed an intriguing dark horse and great to see this ferocious debut being recognised but in the cold light of a shortlist which omits Colson Whitehead’s acclaimed The Underground Railroad, winner in the US of both the National Book Award and the Pulitzer Prize for Fiction, Fridlund’s work seems lesser and reduced to being a coming-of-age novel overly reliant on violence to carry it over the line. Think Daniel Woodrell’s superior Winter’s Bone and then return to it. Fridlund’s relentless excess should prove her undoing here.

Jon McGregor will not be alone in wondering what halted the march of his beautiful and meditative Reservoir 13. Once it received the longlist nod over his fellow Briton Adam Thorpe, for Missing Fay – both novels share a central plot about a missing girl who is never that vital to either novel – it seemed that McGregor, a former Dublin International prize winner, was Man Booker-bound. Alas, even in the history of this most capricious of prizes, this exclusion is an odd one.

Even more bizarre and without a trace of bias, it is difficult to comprehend how the second youngest contender, Briton Fiona Mozley, made the cut with her emphatic debut, Elmet, a strange tale of a boy recalling life in a wood – perhaps readers of Henry David Thoreau’s classic Walden may share my wariness? – could have justified the exclusion of Sebastian Barry’s Costa-winning Days Without End, his most convincing novel to date.

Yet should there be a prize for the book which failed to make the shortlist but most deserved to win, it should be presented to Mike McCormack for his virtuosic Solar Bones.

A performance piece of dazzling wit and pathos, McCormack’s appearance on the Man Booker longlist was a genuine cause for celebration. It was not only an endorsement of his wilful, rhythmic linguistic panache; here we had a novel that simply demands to be read aloud. By selecting it, the judging panel confirmed that along with the obvious – Saunders, Whitehead and McGregor, never mind Arundhati Roy and Zadie Smith – neither of which was shortlist-bound – it had struck a life-affirming note. Solar Bones looked a winner, all it had to do was make the shortlist . . .

The omission of McCormack’s wonderful novel about one man’s life recalled in death leaves the way clear for George Saunders with a story about a father’s love for a dead son. Funny how death can often prove so supremely capable of bringing literature most vividly to life.