Angela Bourke, author of Maeve Brennan: Homesick at the New Yorker, and Irish Times writer Patrick Freyne discuss and read from her work 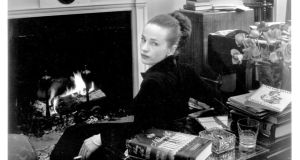 Maeve Brennan: “You are all your work has. It has nobody else and never had anybody else”

Maeve Brennan was born 100 years ago, on January 6th, 1917, so this month we have been celebrating her memory, her life and her work.

Despite her status and success on the other side of the Atlantic – as the daugher of Robert Brennan, Ireland’s first ambassador to Washington, she emigrated to the US at 17 and became a staff writer on the New Yorker, which published dozens of her stories and sketches – she was never published in Ireland or Britain in her lifetime.

That has been remedied with the recent publication by Dublin’s Stinging Fly Press of her Dublin short stories, The Springs of Affection, and her New Yorker sketches as The Long-Winded Lady, in the wake of New Island’s publication of her remarkable early novella, The Visitor, discovered only after her death by Christopher Carduff.

We recently republished an essay by Fintan O’Toole from January 1998, which was the first time that news of this remarkable Irish writer had crossed the Atlantic, tracing the tragic arc of her life from priviliege and success to mental breakdown. “Her voice was one the country her father had helped to create was largely unable to hear. Even for the daughters of the revolution, Ireland was no country for young women.”

It was this article which inspired writer and academic Angela Bourke, author of The Burning of Bridget Cleary and The Field Day Anthology of Irish Writing Volumes IV and V: Irish Women’s Writing and Tradition, to write her 2004 biography, Maeve Brennan: Homesick at the New Yorker.

In this podcast, I discuss Brennan’s life and work with Bourke and my Irish Times colleague Patrick Freyne, a long-time admirer of Brennan’s journalism, recently republished by Stinging Fly Press under the title The Long-Winded Lady, the pseudonym under which she wrote in the New Yorker’s Talk of the Town column.

Bourke discusses her recent meeting with Brennan’s friend and fellow author Edith Konecky, whose novel, A Place at the Table, features a character called Deirdre, who is a disintegrating Irish writer. Konecky and Brennan first met in 1972, at an artists’ retreat, MacDowell Colony in New Hampshire, where they later returned with a third writer and friend, Tillie Olsen.

The podcast is topped and tailed with readings from Maeve Brennan’s work. Patrick Freyne reads from Lessons and Lessons and Then More Lessons, the only Long-Winded Lady sketch that reveals the Irish roots of this glamorous Manhattanite. (There are, however, hints of her hinterland scattered here and there, whether she is buying a Benedict Kiely novel or a lengthy quotation from Oliver Goldsmith.)

Freyne goes on to explore why he finds her journalism so refreshing and compelling, what he terms its “anti-clickbait” qualities, “beautiful writing that is technically about nothing”. Mary O’Donoghue called it “the inconsequential magnified to high psychological seriousness and comedy” while Belinda McKeon praised how it captured “what it was like to be female alone and outsider in mid-20th century New York”, reminscent, perhaps, of Peggy Olsen from Mad Men.

Angela Bourke reads Brennan’s inspirational note to Tillie Olsen, which she, Konecky and Bourke have all pinned by their desks.

“I have been trying to think of the word to say to you that would never fail to lift you up when you are too tired or too sad not [to] be downcast. But I can think only of a reminder – you are all it has. You are all your work has. It has nobody else and never had anybody else. If you deny it hands and a voice, it will continue as it is, alive, but speechless and without hands. You know it has eyes and can see you, and you know how hopefully it watches you. But I am speaking of a soul that is timid but that longs to be known. When you are so sad that you ‘cannot work’ there is always a danger fear will enter in and begin withering around. A good way to remain on guard is to go to the window and watch the birds for an hour or two or three. It is very comforting to see their beaks opening and shutting.”