Mad, Bad, Dangerous to Know: The Fathers of Wilde, Yeats and Joyce review 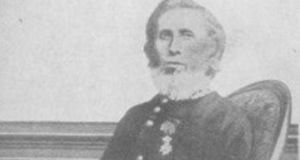 Sir William Wilde: Tóibín draws illuminating connections between the scandal over the allegations lodged against him by Mary Travers and the later trials of Oscar.

At the beginning of his essay on John B Yeats, the artist father of the poet WB Yeats, Colm Tóibín turns first to think about the act of biography, the moment of intense connection that characterises the beautiful attentions of his latest work:

“Somewhere in the great, unsteady archive where our souls will be held, there is a special section that records the quality of our gaze. The stacks in this branch of the archive will preserve for posterity the history of those moments when a look or a glance intensified, when watchfulness opened out or narrowed in, due to curiosity or desire or suspicion or fear. Maybe that is what we remember most of each other – the face of the other glancing up, the second when we are held in someone else’s gaze.’

Mad, Bad, Dangerous to Know is not a book of new material per se, and the very readability of the essays might perhaps obscure what is innovative and exciting about them. Tóibín presents us with new constellations of material: letters, poems, autobiographies, memoirs, events and his own experiences are placed side by side, with Tóibín holding them newly up to the light. What we get, here, is a writer’s take on literary history: a set of essays that probes emotional resonances, the aftershocks of family drama, the peculiar ways that buried tensions and influences can resurface down the generations.

Tóibín’s own generous presence lifts in and out of these essays: the moment when he sees John B Yeats’s self-portrait, worked and reworked for years, hanging in a stairwell; the day that he spent reading Oscar Wilde’s De Profundis aloud in Wilde’s cell in Reading Gaol; a chance meetings with a scholar in a New York archive; a discursive and writerly walk through Dublin past and present, his own personal history intertwining with the history of the city. But Tóibín never inserts himself into his essays through ego: rather, he presents moments of recognition, of connection, where the gaze of his subject meets his own gaze for a second, and teaches something much more valuable that the historical details of dates and shifting geographies. In each of these essays, Tóibín finds the human, the personal connection between father and son, the realignment of family relationships, and in turn rehumanises through context these canonical writers and their works.

In the first essay, Tóibín draws illuminating connections between the public scandal over the allegations lodged against William Wilde by Mary Travers and the later trials of his son. He also makes a wonderful discursive argument about class heredity and the possibility of forming identity through literature that is both a revealing and refreshing take on the 19th-century Anglo-Irish. The trembling, ecstatic letters from John B Yeats to Rosa Butts are also placed in oblique but fascinating relation to the later poems of his son. As Tóibín writes of John, “the foolish, passionate man, with his excited, passionate, fantastical imagination, did not write about the life he had missed, but the life he imagined, and he gave that life a sense of lived reality, as though it were not only somehow possible, but almost present.” Although based in biographical and historical “fact”, it is Tóibín’s intuitive sense of emotional and psychological nuance, of character, we might say, that really makes these essays so engaging.

The final piece, on John Joyce, father of James, is more heavily focused on James’s processing and refiguring of his father through his literary works, from Dubliners and Stephen Hero through his poetry and on to Finnegans Wake. John’s family background, though consisting of well-to-do merchants and property owners, perhaps makes documentation of his life less accessible for literary exploration than the intensely literate lives of Jane Elgee, William Wilde, John B Yeats and Susan Pollexfen, and so Tóibín’s essay is more geared to James’s grappling with his father than his father as a standalone figure. That choice is understandable.

Taking much of its documentation from Stanislaus Joyce’s often embittered recollections of family life, the John Joyce we get here is “domineering and quarrelsome”, “lying and hypocritical”, ‘”spiteful like all drunkards who are thwarted”. In Tóibin’s shifting exploration of John’s figure in James’s work, we see how Joyce took his father out of time, saw himself in his guise, and eventually merged with his spirit, as in Finnegans Wake: ‘it’s sad and weary I go back to you, my cold father, my cold mad father, my cold mad feary father’.

These are essays in the best sense of the word: searching, funny, exploratory, generous, with a willingness to reach out and humanise, through frequent acts of empathy, both the major and minor figures of these three families. Throughout them, Tóibín holds the gaze, is watchful and intent and charming, and (as a welcome bonus) tells us more than a little about our own selves along the way.