Lullaby by Leïla Slimani review: Meet the help from hell 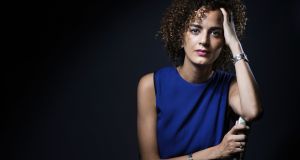 French-Moroccan writer Leïla Slimani: Not since The Hand that Rocks the Cradle has someone showcased so effectively the power a nanny can have within a family. Photograph: Joel Saget/AFP/Getty Images

“And then time started to drag; the clocklike perfection of the family mechanism became jammed.” Billed as the French Gone Girl, Leïla Slimani’s Lullaby is not quite as suspenseful but more than makes up for it with a superior standard of writing. Her debut novel, which saw her become the first Moroccan woman to win France’s most prestigious literary prize, the Goncourt, is a taut, haunting tale about a family’s nightmare experience with a nanny.

Not since The Hand that Rocks the Cradle has someone showcased so effectively the power a nanny can have within a family, an influence that starts out so positively and ends in blood.

In her gothically titled debut, Slimani sets up the suspense by opening with a murder scene in a handsome Parisian apartment in the 10th arrondissement. Infant Adam, and possibly his toddler sister Mila, have been brutally slaughtered by their nanny Louise. The resulting novel becomes a whydunnit as Slimani excels at delving into the minds of her characters with omniscient flair.

Early chapters show harried mother Myriam, a lawyer of North African descent, struggle with depression and the drudgery of looking after two small children while longing to get back to her career: “She gave the baby a bath and thought to herself that this happiness – this simple, silent, prisonlike happiness – was not enough to console her.” At night, she watches her husband Paul “sleeping the deep, heavy sleep of someone who has worked hard all day and deserves a good rest”.

Myriam’s decision to go back to work is treated sensitively by Slimani. The fulfilment of winning cases and praise from her boss is contrasted with the guilt Myriam feels at leaving her children. Enter Louise, a well-mannered and well-presented woman who brings order to a chaotic household, a framework that initially allows the family to flourish. Slimani skilfully portrays the dichotomies of the role, as Louise becomes an integral part of the family yet in many respects is also their servant. She does the jobs they no longer wish to do, gets embroiled in their personal affairs, and tries to navigate the dual role of “being simultaneously invisible and indispensable”.

Flashbacks to Louise’s past show similar problems. When her estranged daughter Stephanie was a child, she was warned by her mother to keep her distance from her wards: “I know they said this was sort of our holiday too, but if you have too much fun they’ll take it badly.” What is clear, throughout all her various employers, is that the families expect Louise to be there but also not to be there. Sphinx-like, she is, in Slimani’s words, and Sam Taylor’s excellent translation, “like those figures at the back of a theatre stage who move the sets around in the darkness”.

Excruciating scenes where Louise is extolled by Myriam and Paul and their dinner party friends, or brought on her first ever trip abroad by the family, give way incrementally to petty grievances. The nanny’s thriftiness becomes tightness, her ubiquity a burden, her playfulness with the children signs of a mind not entirely stable. While the omniscient narrative is too busy at times – neighbours, Louise’s former employers and lovers – it succeeds in giving voice to the two women at the heart of this book. It is to Slimani’s credit that neither are villains – at least not initially.

The fitting epigraph from Dostoevsky’s Crime and Punishment – “Do you understand, dear sir, do you understand what it means when there is absolutely nowhere to go?” – sums up Louise’s miserable situation as a woman of no means who has clung on to life by helping improve the lives of others. Her descent into poverty, helplessness and ultimately mania is entirely convincing.

As she “patiently builds her nest” in the family’s home, readers can predict what will happen. In many ways, not least a horrifying scene with a chicken carcass, there is plenty in this novel to create suspense and the hook of the startling opening scene might have been better as a slow reveal.

The reversal of the two women – Myriam’s immigrant origins and Louise, a white woman living in places that are only rented to people with darker skin – adds further depth to the novel, exploring themes of race and gender. Other acerbic social observations frequently bring moments of lightness to the plot. Myriam’s friend gives her children “unpronounceable names, taken from Nordic mythology, whose meanings she enjoys explaining”.

At the centre of the book is the contrast between Louise’s function – to give Myriam back her lost life – and the sad fact that the nanny’s own life has never been hers to control. It puts Louise and her wards in an airtight container, and when the lid finally comes off, it’s accompanied by “the kind of scream heard during war, in the trenches, in other worlds, on other continents”.