Look to business, not the State or charities, to fix our problems 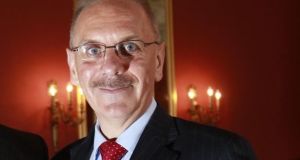 Paul Kelly: his behaviour as head of the bereavement charity Console has raised questions about how charitable donations are supervised. Photograph: Brenda Fitzsimons

When you hear of company directors and their extravagant lifestyles, jet-setting around the world, spending hundreds of thousands of euros on their salaries and dining in fancy restaurants, you probably think: “I should be so lucky”. Yet when we find out that this a pretty accurate description of how Paul Kelly lived for years as the head of the Dublin bereavement charity Console, we have to think otherwise. Like many successful company directors, he pulled in masses of cash and grew the project, first across Ireland and then to London. He even won a People of the Year award for his promise to help families that had experienced a suicide.

But when the bubble burst on him, revealing his lavish use of the funds raised on his own lifestyle and the apparently fictitious use of trustee names including Bertie Ahern to leverage ever more donations and grants, we inevitably feel a sense of betrayal or anger – especially if we had donated or otherwise supported the project. Now, of course the heads of most charities are thoroughly decent people but Kelly’s story has to make us wonder about why either as individuals, grant-making bodies or governments we believe that by giving them money, our association with them pretty much starts and stops at the same time.

We rapidly move from guilt at having been presented with a problem we may have been unaware of to pride in having written a cheque in the hope that we have helped solve said problem.

And that’s the problem with charity – it’s based on hope rather than success. Over the past decade my London restaurant Roast has donated a six-figure sum to various projects that have promised to solve various problems. I’ve sat on the boards of charities, chaired a few, and been instrumental in raising millions over the years so my observations are not those of an armchair critic or even of a grumpy skinflint.

The purpose of my new book Charity Sucks is to go beyond what investigative journalists have done so well over the past few years in exposing bad practice and the failure to deliver in the third sector. It’s to share my newfound belief with the empirical evidence to back up the proposition that businesses – not the state, not charities – are going to be ultimate fixers of most of our problems.

Here’s why. When in the past businesses have adopted bad practice, from the local shop selling stale produce to multinationals being exposed for exploitative labour practices from suppliers in developing countries, the customer increasingly shops elsewhere. It is often the case that customers have greater ethical codes than businesses and so when they find ones that share their values, they reward them with their custom.

The landscape from which we conduct business is rapidly changing. Learning from the mistakes of the past, capitalism is entering its final phase and in the process of becoming complete, charity is increasingly becoming obsolete. Companies are increasingly driven by purpose beyond profit and indeed purpose is becoming a major driver of profit. In the past, a restaurant would define its purpose as the service to provide food and drink to customers in a manner in which they would want to return.

Now we take that as a given and we see our obligations to a wider range of stakeholders than the customers and employees within the walls of our building. We share our profits with organisations that help empower entrepreneurship in disadvantaged communities, we engage with schools to encourage balanced diets for children, we go into prisons and encourage inmates to look at a career in hospitality on release rather than a return to crime.

These activities are no longer a founder’s personal passions being indulged whilst the rest of the company runs the business; now we are living in an era where these values become the core of the business. I always sort of knew that our employees engaged with these activities but was still slightly surprised when we did a team survey, which shared the results of a social impact assessment report I commissioned. This measured the results of the various social interventions we had undertaken over the last three years. The simple question we posed was how important was this to them. Eighty out of the 100 people we employ said it was the main reason they worked for us.

That was the slight surprise. The massive surprise was that when we started gaining media exposure for our work in prisons, people started writing to us saying that they hadn’t been aware that we did that, they would make sure to dine with us – often for the first time, for others sharing our activities within their networks to encourage others to dine with us. So like many other businesses, we have stumbled across the realisation that doing good is not an end result. The end result is that doing good is good for business.

We are entering a final phase of capitalism where you no longer need to release an extra euro for charity in the hope that it might do something useful because your existing euro spend, when placed in the companies which share your values, are delivering the better world we all want.

Charity Sucks by Iqbal Wahhab is published by Biteback, priced £10. Wahhab is a Bangladeshi-born British businessman: founder of Tandoori Magazine and multi-award winning restaurants The Cinnamon Club and Roast. In 2012, he became chair of Britain’s epartment for work and pensions’ ethnic minority advisory group