Lola Ridge, a great Irish writer and why you’ve never heard of her

New Zealand gold miner’s wife became a leading Modernist. She wrote poems about Easter Rising and Jim Larkin and New York Times called her one of best poets in US 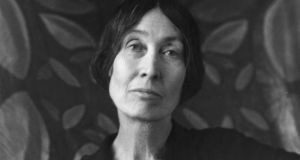 Lola Ridge never lost her allegiance to Ireland. In her first book, she paid homage to the Easter Rising with The Tidings. In her second, Sun-up and Other Poems, she celebrates the Irish activist Jim Larkin who was arrested in the Palmer raids on an extended visit to the US, and jailed in Sing Sing for anarchism

Born in Dublin, raised in New Zealand, educated in Australia, anarchist Lola Ridge went from being the wife of a New Zealand gold miner in 1908 to the centre of Modernism in America in 10 years. Working for Emma Goldman and Margaret Sanger, she wrote such explosive poems about immigrants, labour, executions and sex that her first book made the cover of the New Republic.

“Nice is the one adjective in the world that is laughable applied to any single thing I have ever written,” she confessed to a friend. Ezra Pound acknowledged her influence, Marianne Moore became a good friend, young Hart Crane flirted at her parties, Jean Toomer, chief figure of the Harlem Renaissance, flourished under her editorial advice, and Mayakovsky pounded on her coffee table. She worked hard as an editor of two major Modernist magazines and as an active salonniere, uniting and inspiring poets and critics on the issue of what was genuinely American poetry. Standing under a rearing police horse, she defied the executioners of the immigrants Sacco and Vanzetti, and was arrested with Edna St Vincent Millay in 1927. At the height of the Depression, she begged patrons, check by check, for funds to travel to Baghdad solo and back, to write at the origin of civilisation. She toured Mexico alone for a year to understand the roots of American culture. When she died in 1941, the New York Times proclaimed her one of the best poets in America – then her work disappeared, a casualty of the anti-liberal, anti-female, and anti-experiment sentiments of the second World War and a continued critical disdain for political poetry.

How Irish was she? “A descendant on my mother’s side of a very old Irish race of Princes,” she frequently claimed. A distant relative produced a document in 2011 that traced Ridge’s lineage in a direct line from Hemon, king of Ireland and Scota, the daughter of the King of Egypt, and descent from the last prince of Breifne. The report was extracted from 70 pages of genealogical detail dictated by Ridge’s grandfather, John Reilly, with six critical pages verified by the Biographical Society of Ireland.

By 1848 her branch of the Reilly family lived in Loughrea, in Co Galway. Ridge’s paternal grandfather, attorney Joseph H Ridge, also lived in Loughrea, and later, north Dublin. By 1869, the widower John Reilly retired from a position as customs collector to St James Terrace, Dolphin’s Barn. It is an area known as The Back of the Pipes, the location of a waterworks for the River Poddle for 400 years. James Joyce knew the place well, mentioning it eight times in Ulysses, most immortally in Molly Bloom’s soliloquy. It was then a popular place for courting couples, and featured a “stone sofa” at St James Walk. Victorians were desperate for a place to court: later and fewer marriages were a marked characteristic of Irish society of the time. Emma Reilly may have been in her early thirties when she wed medical student Joseph Henry Ridge in 1871. Born two years later, Lola Ridge was wanted and cherished as an only child tends to be, and that love was reciprocated.

Your love was like moonlight
turning harsh things to beauty,
so that little wry souls
reflecting each other obliquely
as in cracked mirrors…
beheld in your luminous spirit
their own reflection,
transfigured as in a shining stream,
and loved you for what they are not.
(Sun-Up 69)

Lola’s parents separated when she was only a year old. Perhaps Joseph Henry Ridge had inherited his namesake’s tendency to get into trouble. An 1828 newspaper ran an account of a duel held between a Mr Skerrett and the solicitor Mr Ridge, who had asked questions of Skerret’s father in court that his son considered unnecessary. After the shots were fired, the two parties agreed that horsewhipping Mr Ridge at the Loughrea racecourse the next day would be an amicable solution. At any rate, Emma was living with her father when Lola was born. The few letters known to exist between the couple are not hostile but suggest that “fate” is all that kept them apart. But then Ridge’s grandfather died.

Grandpa, grandpa…
(Light all about you …
ginger … pouring out of green jars … )
You don’t believe he has gone away and left his great
coat …
so you pretend … you see his face up in the ceiling.
(Sun-up 4)

What could a separated mother do to make money in Victorian Ireland? The nunnery was out. Prostitution? Joining the household of one of her siblings in Dublin was less appealing than emigrating halfway around the world to live with her sister. Emma and four-year-old Lola boarded the Duchess of Edinburgh and arrived in Australia in 1877, the first of Ridge’s many long voyages.

But she never lost her allegiance to Ireland. In her first book, she paid homage to the Easter Rising with The Tidings, a poem written while she was wandering Midwest America, honing her craft and most probably organising for the anarchist Emma Goldman.

My heart is like a lover foiled
By a broken stair –
They are fighting to-night
in Sackville Street,
And I am not there!
(Ghetto 79)

In her second book, Sun-up and Other Poems, she celebrates the Irish activist Jim Larkin who was arrested in the Palmer raids on an extended visit to the US, and jailed in Sing Sing for anarchism.

One hundred million men and women
go inevitably about their affairs…
They do not see you go by their windows, Jim Larkin,
with your eyes bloody as the sunset
And your shadow gaunt upon the sky…
You, and the like of you, that life
Is crushing for their frantic wines.
(Sun-up 92)

As an immigrant herself, she well understood the disillusionments America offered the Irish. Debris reflects her expertise in imagism, a poetic practice that emphasises concise imagery.

I love those spirits
That men stand off and point at,
Or shudder and hood up their souls –
Those ruined ones,
Where Liberty has lodged an hour
And passed like flame,
Bursting asunder the too small house.
(Ghetto. 43)

A year after Ridge’s death, critic Horace Gregory remembered her place and presence as very Irish: “The loft was very like some neatly, frugally kept cold-water flat in Dublin, and the unworldly presence of Lola Ridge, a slender, tall, softly-speaking, thin-featured woman in a dark dress, heightened the illusion of being in a place that was not New York, but was well in sight of Dublin’s purple hills. Even as one rereads her books one gains the impression that she regarded her social convictions and the writing of poetry in the same spirit in which an Irish girl invokes the will of God by entering a convent.” “She made a religion of it,” wrote her friend William Carlos Williams, who also called her a “Vestal of the Arts.”

Ridge, however, was no saint. A bigamist, a drug-addict, an anorexic, and an impoverished, reluctant mother who left her son in an orphanage for eight years, she struggled, like many of the Modernists, against the mores of the Victorians. Her stubborn faith in freedom partially explains her subsequent neglect. Today, with the rise of the corporate robber barons, rampant international xenophobia, and repeated attacks on women and reproductive rights around the world, her work as a writer and editor represents a little-known branch of Modernism that is ripe for discovery by the Occupy generation. Her best advice to all poets: “Write anything that burns you.”

Terese Svoboda is the author of Anything That Burns You: A Portrait of Lola Ridge, Radical Poet (Schaffner Press) teresesvoboda.com
The James Joyce Centre, North Great George's Street, Dublin 1, and New Dublin Press host a talk and reading by Svoboda on Monday, October 10th at 7pm. Places for this event are free but limited. Book your places on 01 878 8547