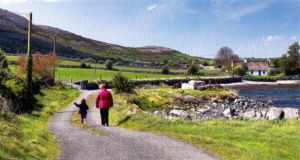 The Burren, Co Clare, from The Little Roads of Ireland 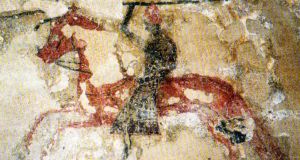 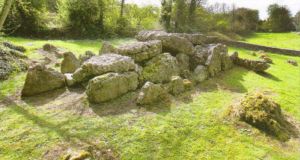 Megalithic tomb from The Archaeology of Lough Gur

The high places of Ireland hold a seductive power, capturing the imagination of writers and artists with their tales of heroic deeds and enigmatic characters. In Wild Stories from the Irish Uplands (Currach Books, €14.99) John G O’Dwyer sets off on a foot-stepping quest to discover lofty landscape features, illuminating his narrative with significant historical detail interspersed with conversations and his thoughts.

The life and times of outlaws such as William Crotty, Edmund O’Ryan (Éamonn an Chnoic), “Freney the Robber”, and the extraordinary story of Michael Dwyer, a man who took the road less travelled, are chronicled. In one chapter, Fr Uinseann O’Maidin, the librarian at Mount Melleray on the Knockmealdowns in west Waterford who joined the order on August 15th, 1949, explains how he has a mobile phone but has never used it.

A sprightly and insightful book, this is not a walking guide, although it could be used to open the door for those planning ahead to climb Carrauntoohil, Mullaghmore mountain in the Burren, or Slievenamon, which the author compares to “looking like a benevolent grandmother in the Tipperary countryside”.

The boreens of Ireland leading to the mountains have been much celebrated and the photo-journalist David Rice adds his interpretation in The Little Roads of Ireland (Mentor Books, €16.99) through a marriage of text and evocative images. Over the course of each season, he covers a dizzying variety of territory with rural roads in summer glory or the grip of winter, crossing everything from the famed “dual cabbage ways”, with grass growing along the centre, to those that peter out in a dead end.

The byways and fuchsia-rich tracks of a slice of the southwest were traversed by Kieran McCarthy on his 400cc scooter for 50 Gems of West Cork (Amberley, £14.99). In a landscape haunted with relics ranging from Bronze Age standing stones to ivy-clad castles, the past lies all around, but the seascape in the form of islands, lighthouses and beacons is also explored.

The cable car across to Dursey Island, which used to carry either six people or one cow, was revamped with a new car during 2019. Curious stories behind the sights are brought to life such as the fact that Castletownshend, formerly called Glanbarrahane, derived from a deep rocky glen dedicated to St Barrahane, a fifth-century hermit saint. With its Harry Clarke stained-glass windows, St Barrahane’s Church of Ireland is set on high ground with 52 steps to the top, representing one for each Sunday of the year.

Staying in the same area, the remarkable story of a largely forgotten botanist has been described as “a serious contender for west Cork’s best kept secret”. Ellen Hutchins (1785-1815): Botanist of Bantry Bay (Bantry Historical and Archaeological Society, €15) is a short biography compiled by her great-great-grandniece Madeline Hutchins.

As well as being an accomplished botanical artist, Hutchins, who came from Ballylickey, made an internationally important contribution to the understanding of non-flowering plants – seaweeds, lichens, mosses and liverworts – discovering at least 20 new to science, many of which were named after her.

Further up the west coast, Clare Island was intensively surveyed by scientists more than 100 years ago and their findings were masterminded by Robert Lloyd Praeger. Covering natural history and cultural heritage, it was one of the first surveys of its type anywhere in the world.

In recent years the exercise was repeated for a series of specialist multi-authored books aimed at a specific readership including, amongst other subjects, history and cultural landscape, archaeology, geology and the Abbey (Vol 4) – a Cistercian church which retains much of its extraordinary medieval wall paintings and a rare survival in Ireland.

The outcome of both the new and old studies has been distilled into one readable volume, Clare Island by John Feehan (Royal Irish Academy, €40), who fell under the spell of its enchantment many decades ago. An ecologist, and the author of numerous books on the landscape and mountains, Feehan has synthesised the results of the surveys and assessed the significance of the differences between them in an accessible way.

Another hefty volume, specifically on one area, The Archaeology of Lough Gur by Rose M Cleary (Wordwell, €30), is also the product of sustained work covering excavation and surveys over the past 150 years. This includes a series of investigations by Seán P Ó Ríordáin during the middle decades of the 20th century which opened up a previously unknown world of past inhabitants. A storied and antique land, which has had a powerful grip on the imagination, the imprint of human activity at Lough Gur began as far back as 8000 BC, when the first hunter-gatherers crossed the countryside around the lake.

From the stone age up to the settlements of the 16th century, each chapter explores a different era, incorporating topics such as beaker cultures, ring barrows, crannogs and megalith tombs.