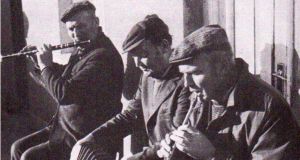 The vibrant storytelling, song-and-dance tradition of Doolin is captured in Eddie Stack’s handsomely produced collection of essays Doolin: People, Place & Culture (Tintaun, €20). Music is to the fore with a fascinating chapter on the famed Russell brothers, Micho, Gussie and Pakie, and their unique style of playing. Much music was collected over the years from the Russells, notably by Breandán Breathnach and Séamus Ennis. As well as black-and-white photographs of the brothers, the book reproduces Ennis’s diary entry from his meeting with Pakie in which he described a night in Fisherstreet as the most enjoyable he had ever spent.

Doolin has attracted many types of visitors such as Petrie and Westropp, bohemians from the Bloomsbury Set, and the Welsh painter Augustus John. When Séamus Delargy of the Irish Folklore Commission arrived in 1929 with a heavy Ediphone machine, he set about recording over the next six years an astonishing oral library of 500 stories, seanachais pieces, proverbs and vocabulary.

A flood of geologists and botanists was followed by the hip backpackers, drunks and punks of the 1970s when it was an “exotic, chic and cosmopolitan place”. Old Doolin, the author decides, has slipped away. From cultural oasis to tourist Mecca, it is now brimful of new shops and cafes, scores of B&Bs, and a place where the pubs serve more meals than pints of porter. Stack quotes a sociological study of the area in 2009, noting the kindest remark: “The good is gone out of it.”

For more than 40 years, Jack Johnston has been writing local history and fossicking around the fields and farms of south Ulster and north Connacht. But his territory for The Clogher Story (Clogher Development Association, €25) is a comprehensive survey of his home place in south Tyrone over which he spreads a wide subject canvas. He assembles a vast collection of photographs and an array of long-lost invoices and billheads spanning 150 years.

Written in a personable style, the book covers the spectrum of small-town community life. It evokes a world of corner shops, general drapers and shoe merchants, saddlers and blacksmiths, auctioneers and attorneys in the days of the much-loved narrow-gauge Clogher Valley Railway.

One chapter deals with famous people born in Clogher and includes a pen portrait of Monica Sheridan. A pioneer Telefís Éireann cook in the early 1960s, she was sacked from the programme for licking her fingers while baking.

Clogher’s best-known son, the 19th-century novelist William Carleton, was born at Prillisk. In the author’s estimation, his reputation rivalled contemporaries such as Dickens and Sir Walter Scott. Writing in the foreword, Prof Owen Dudley Edwards suggests that although Johnston is not a latter-day Carleton, his voice becomes Carletonian when delighting in past and present aesthetics of the landscape.

Johnston, whose family has farmed in the fertile Clogher Valley for centuries, trained at Trinity College Dublin where he inhaled perceptions under Theo Moody, founder of the journal of Irish Historical Studies. The Clogher Story, by a master topographer, is local history par excellence.

Jim O’Malley’s engaging account of his seven-day riparian ramble Walking the Munster Blackwater (Ashfield Press, €20) will be valued by walkers, anglers and local historians. A mosaic of geography, landscape and literature sits alongside precisely drawn maps and photographs of bridges and viaducts, flora and fauna.

Based on a long-standing ambition, the author’s journey starts on the Kerry/Cork border and takes the reader through north Cork, the delectable countryside of west Waterford and on to Youghal. Each chapter outlines in detail one day’s walk as well as encounters with a cast of characters who provide local lore and insight into sequestered villages such as Ballyduff or Ballyhooley.

Although the going is generally easy along his 104-mile hike, O’Malley weaves in mini-dramas of his close encounters with nature. These include his falling into a muddy drain and tearing his trousers, his knapsack becoming entangled in an electric fence, or indulging in nelipotting by walking barefoot across rough pasture of thistles and coarse grass.

When he reaches journey’s end at Youghal, ‘Walking Man’, as he refers to himself, experiences a sense of anti-climax but nonetheless “quiet contentment” about having followed the banks of the Blackwater from source to sea.

The third in a trilogy of memoirs, P J Cunningham’s A Fly Never Lit (Ballpoint Press, €14.99) delves into stories from his 1960s’ rural past growing up on a farm in Clara, Co Offaly.

Sixteen short tales are based on recollection of his schooldays around the fireplace and over meals.

The anecdotes are mixed in with humour from neighbours and friends. Cunningham recalls how his father smoked Kapp and Petersons with the man next door. “They were like two Indian chiefs smoking their own peace pipes; often in the evening they would sit side by side without a word being spoken, just puffing their pipes and watching the world go by.”

In parts of Donegal and Northern Ireland, you may still hear Ullans, a variety of the Scots language with a rich diversity of words and phrases that puzzles outsiders. Liam Logan’s Thon Ulster Scots Book (Galdanagh Publishing, €12) is filled with the best of them.

If someone says “howl yer wheest”, they are suggesting you should be quiet, while “thon” (that), “thrawn” (stubborn), and “thole” (to tolerate) are all in regular usage. This is a book in which to dip and go on dipping, but when you want to “shire yer heid” (collect your thoughts) you may wish to take a break because you could well have had a “scunner”. Paul Clements is the author of Wandering Ireland’s Wild Atlantic Way: Banba’s Crown to World’s End, published by the Collins Press