Letterpress printing as an art form in itself 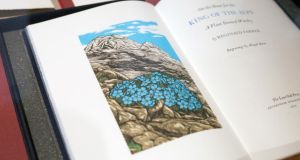 The term “to make a good impression” comes from printing. In traditional letterpress printing text was set by hand in rows of metal or wooden type – the letters in mirror image – and locked into the bed of the press. The paper was then pressed on to the inked type; when it was peeled away the text had been transferred on to the page. The aim was to get as clear and crisp an imprint as possible – to make a good impression.

From the mid 15th century, when Johannes Gutenberg invented the printing press, to the middle of the 20th century almost all books – and newspapers – were printed by letterpress. Then came offset printing and, in the 1980s and 1990s, digital printing. Now anyone can print at home with their laser or inkjet printer.

In spite – or perhaps because – of the digital revolution, there has been a resurgence of interest in letterpress printing over the past decade. Artisan printers have sprung up all over the world, producing everything from wedding stationery to fine-press books.

Craft presses are especially big in the US and Canada, but a quick browse of briarpress.org, an online community of letterpress printers, with more than 70,000 members, shows they are thriving in many countries, including Ireland. The old machines are in great demand and are becoming more expensive. There’s a Fine Press Book Association and book fairs in Oxford, San Francisco and New York.

These books, produced in limited editions, sometimes with illustrations in woodcut, linocut or intaglio, are really works of art. They are often printed on handmade paper, and bound by hand in fine cloth or leather, with decorative endpapers and hand-sewn silk headbands (the trim at the top of the inner spine that keeps the pages stable between the covers). They may come with a colophon, or end page, that details the printers and printing method, including the fonts, paper, binding materials and methods used. It is usually signed by the author, artist and printer.

There are many fine-book collectors, both individuals and institutions. Prices vary but can run into thousands of euro per copy.

The classics are popular, as is the Bible, along with contemporary poetry and, unsurprisingly, books about aspects of printing and typography.

At the National College of Art and Design, Seán Sills, a master printer, runs Distiller’s Press, a letterpress workshop. The designer in residence at Distiller’s Press, Jamie Murphy, works closely with Sills, helping students with their printing projects.

Murphy’s own Salvage Press is doing some lovely work, including a translation by the late Michael Smith of the Anglo-Saxon poem Maldon, with wood engravings by Simon Brett.

He is also the curator of Exquisite Editions, an exhibition of the very best of fine-print books, now at the National Print Museum.

Among the highlights are Iskandariya, by Heavenly Monkey printers in Canada, a monochrome edition of a prose poem by Brigit Pegeen Kelly, with exquisite aquatints of strange creatures by Briony Morrow-Cribbs; Angels, “a celebration of angelic appearances in the Bible”, designed by Rosemary Roberts at Celtic Cross Press in Yorkshire; and the Australia-based poet Alan Loney’s Jenson’s Greek, inspired by the will of the 15th-century printer and engraver Nicholas Jenson, with poems made from words in Jenson’s will printed on handmade paper.

Oddly, one of the things that gives letterpress-printed material its cachet now – the visible imprint of the type on the paper – wasn’t considered desirable back in the day. The aim was to leave a pristine print of the text, without digging into the paper. One era’s mistake is another’s best impression.