Lethal Allies: British Collusion in Ireland: A shameful part of our troubled history 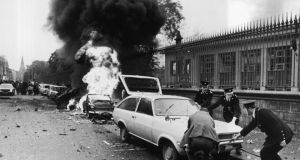 Indiscriminate atrocity: Nassau Street during the Dublin bombing of 1974

‘There is no human situation so miserable that it cannot be made worse by the presence of a policeman.” This Brendan Behan quotation provides the sole bleak and surreal laugh in this shocking book.

Take the story of Mick McGrath. On a summer evening in 1976 the middle-aged bachelor called into the Rock Bar near his home in the Co Armagh countryside. As he was leaving, a carload of gunmen arrived and started shooting. Lying wounded on the ground, McGrath watched one of the gang plant a bomb while another raked the pub with gunfire. As the departing attackers ran past him, he noticed something else. Their boots. They were like policemen’s boots.

They were, in fact, policemen’s boots. All the men were members of the Royal Ulster Constabulary’s special patrol group, an elite group of officers whose role was to combat terrorism. The vehicle they used was a police car. One of them was back in uniform at the local RUC station in time to take part in the “investigation” of the attack. This included neither an interview with McGrath, the main witness, nor ballistic tests on the bullet removed from his body or on items in the bar in which 17 people had miraculously escaped death.

McGrath was not even told about the court case at which four RUC officers were later charged – a case that arose only after one of the officers made confessions that implicated the others, as well as leading to the arrests of other loyalists.

One of the RUC men claimed the intention had been “to hunt these boys back into the Free State”, implying, falsely, that the Rock Bar was full of IRA men. In his summing up Lord Lowry, the late lord chief justice, extended the metaphor. He understood the defendants felt that “more than ordinary police work was needed and was justified to rid the land of the pestilence which has been in existence.” They were “misguided but above all unfortunate”, and it was appropriate that he impose lesser sentences than would be applicable to terrorists. One of the astonished and grateful defendants cried out in the dock: “Praise the Lord!”

Sectarian killings
Anne Cadwallader comments on “the complete lack of any curiosity on the part of the prosecution or the trial judge” about the weapons used – weapons that could have been sourced only from loyalist paramilitaries, whose main source of weaponry, the authorities had known for years, was the security forces. These guns had, in fact, already been used in multiple sectarian killings that had likewise gone uninvestigated. (One of the book’s remarkable achievements is its charting of the ballistic histories of various repeatedly used weapons.)

Those before the court included members of one of the most vicious sectarian gangs in the history of the Northern Ireland conflict. They included former and serving members of the Ulster Defence Regiment, the Territorial Army and the RUC. If these people did end up in court, the authorities frequently concealed their roles in bodies that were, after all, dedicated to the maintenance of law and order.

Cadwallader sets out starkly the evidence that the multiple murderer Robin Jackson was a security-force agent and therefore protected. She stresses the irresponsibility of the RUC’s special branch, which ran agents but, instead of using the information they provided to save lives, appeared at times to be directing terrorism. Such was the ease with which these killers operated that on one occasion when a plan to place a bomb in one bar was thwarted, they took it to another, where it exploded, killing two people. This despite security-force surveillance of the gang’s hub at James Mitchell’s farm.

During the 1970s it is estimated that this gang in various permutations killed more than 100 people, most of them Catholic civilians. Only one was an IRA man. Cadwallader notes that many were hardworking Catholics who were doing modestly well for themselves. Those killed in the Dublin and Monaghan bombing atrocities were a cross-section of urban society randomly slaughtered. Immense sorrow was caused – and, along with great anger, persists.

Cadwallader describes the passion with which the Catholic priests Denis Faul and Raymond Murray tried to get the British and Irish governments to turn their attention to events in the so-called murder triangle. She quotes Seamus Mallon of the SDLP who made similarly valiant efforts.

She describes the painstaking research that went into this book, carried out by the Pat Finucane Centre, chiefly in the UK’s public records office. She praises the courage and determination of Alan Brecknell, who was a child when his father was murdered by the gang, and who has devoted years to pursuing the truth.

She makes extensive and effective use of reports by the PSNI’s historical inquiries team. It has lately been subject to serious and justified criticism, but it emerges from this book with considerable honour. Its reports describe decisions taken by the RUC and the director of public prosecutions as catastrophic, extraordinary, beggaring belief. It was Dave Cox, former head of the team, who apologised to people such as the late Sadie Reavey for the false allegation, bruited by Ian Paisley, that three of her sons were murdered because they were in the IRA.

Unionist context
The book’s one serious flaw is its almost complete failure to place these terrorists within the context of the culture and history of unionism. There is a far too extended chapter relating British dirty tactics in what the author terms “far flung” places, such as Cyprus and Kenya, to its practices in Northern Ireland. There is almost nothing on the fundamental influence of the Orange Order on the concept of the “unionist family” and on maintaining a segregated society defined by paranoid sectarianism.

The loyalist mentality in unionism ensured the silence of many Protestants around these killings; fear of that mentality ensured it in others. Cadwallader comments on contemporary Iraq, but not the way a new generation of loyalist killers, encouraged by the remnants of the 1970s gangs, lent its muscle to the Orange Order at Drumcree in the 1990s, resulting in another wave of sectarian murders. One woman described Billy Wright to me then as a “roughneck” but added: “He may be a psychopath, but he’s our psychopath.” Michael Farrell’s 1983 book Arming the Protestants sets out plainly the roots of Northern Ireland’s security forces in loyalist paramilitarism and the rationale for ongoing tolerance of illegality around the edges.

In tackling collusion, however, Cadwallader has written a brave, powerful and forensically detailed book about a shameful and denied aspect of our conflict’s history. She adds her voice to those calling for some coherent mechanism to deal with the legacy of the past. It is becoming more painfully obvious every day that this is needed.