Last Train to Hilversum review: detail and trivia tuned to magic of radio 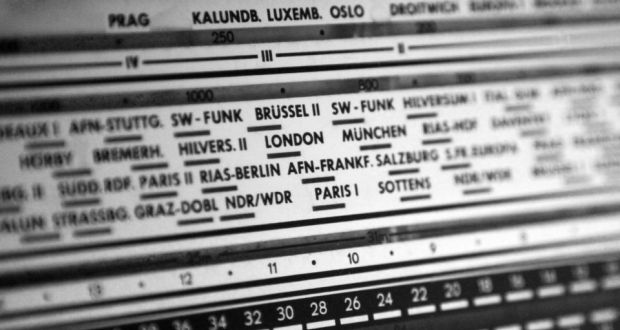 Charlie Connelly mixes historical anecdote with reportage and memoir as he goes “in search of the magic of radio”.

Book Title:
Last Train to Hilversum: A journey in search of the magic of radio

A veteran of the Royal Air Corps during the first World War and a cousin of the writer Aldous Huxley, Capt Peter Eckersley seems like an unlikely precursor to disc jockeys like Tony Blackburn and John Peel. In early 1922, Eckersley was working in rural Essex as engineer for a fledging wireless station called 2MT, which broadcast a nightly schedule of gramophone records and Morse code signal.

One evening, after a few too many drinks with his colleagues at a local pub, Eckersley decided to try his hand at reading the rudimentary on-air links during transmission. Rather than announcing the names of the records, however, the half-cut engineer started to ad-lib, reeling off funny stories and even singing to himself. Not only had Eckersley became Britain’s first radio DJ, he had also unwittingly invented the zany persona that would eventually become de rigueur for the profession.

Charlie Connelly’s book Last Train to Hilversum is dotted with such marvellously oddball vignettes, as he evokes the anarchic early days of the wireless age in Britain and beyond. But this is not a straightforward history of radio. Connelly, a British writer based in Dublin, instead mixes historical anecdote with reportage and memoir as he goes “in search of the magic of radio”. This is, almost inevitably, “a journey”, but its direction is as idiosyncratic as the radio pioneers whose lives he vividly recreates.

The book’s title comes from the Dutch town whose legend was emblazoned on the dials of old wireless sets, alongside a host of other European placenames, Athlone included. In the opening chapter, Connelly recounts how he began hoarding vintage radios after his father’s death, prompting memories of his childhood love affair with the medium. “Each radio represented a slice of intimacy, a deeply personal instrument of comfort,” he writes.

Such sentences appear to herald an air of reverie, but the book is more a free-flowing conversation with an overenthusiastic radio buff. Connelly crams his book with detail, from descriptions of the Dorset hotel where Guglielmo Marconi conducted his groundbreaking wireless experiments to the challenges of running Britain’s smallest station on a remote Scottish coastline. He also has a keen eye for irresistibly daft trivia: Frederick Kellaway, the postmaster-general who oversaw the establishment of 2MT, is memorably characterised as “a keen deerstalker despite his wooden leg”.

With a light, larky style that sometimes reads like a magazine piece, Connelly’s approach can occasionally result in baffling diversions. A chapter on revolutionary comic troupe the Goons ends with Father Ted creator Arthur Mathews opining on what makes good comedy. But the pacing is such that boredom rarely sets in. Lively recreations of events such as soprano Dame Nellie Melba’s 1920 broadcast from Marconi headquarters are accompanied by insightful observations. “Radio lent a new democracy to performance,” Connelly notes.

The author’s devotion to radio is palpable throughout. He captures his raw excitement at being in the studio with BBC Radio 4 announcer Corrie Corfield as she reads out the shipping forecast, describing the iconic bulletin as “the pinnacle of writing in the English language” which as well as inspiring countless authors (including my father, Seamus Heaney) also saves lives.

It’s no surprise that Connelly is so enamoured of the shipping forecast. Firmly rooted in local geography, the bulletin also looks outward, offering help to all who need it. Connelly writes extensively about personalities on contemporary British radio, a medium unfamiliar to Irish audiences in a way that British television is not. It’s a reminder that radio is perhaps the ultimate insider’s guide to the life of a nation.

Yet the author also notes that it is a medium that respects no borders, which “brought a message of peace” in the Great War’s aftermath. After all, listeners across Europe could tune into broadcasts from all those exotic locations on their dial, while in later years British teenagers were liberated by Radio Luxembourg. As singer and presenter Cerys Matthews remarks, “The world is a small place when you have a radio.”

In the era of Brexit, Connelly’s book is an entertaining but firm rejoinder to insularity. He sees radio as a means of reaching outwards rather than turning inwards, even as his quest to visit his eponymous destination leads to more personal self-discovery. By turns intimate and sprawling, informative and diverting, thoughtful and irreverent and, yes, local and universal, Last Train to Hilversum may take a meandering route at times. At its best, however, Connelly’s book captures the freewheeling spirit of the medium it celebrates.