Laird Hunt: some thoughts on a photo found at Gettysburg

The author of Neverhome, an acclaimed new novel about a female soldier in the American Civil War, imagines the story behind a photo found on the battlefield 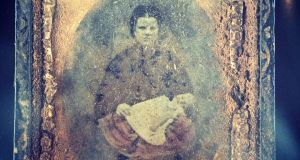 A photograph plucked from the dirt at Gettysburg after a battle there in the US Civil War: “The Smithsonian Institution,” writes author Laird Hunt, “which now has care of the Ambrotype I have been discussing, and which must surely be counted as one of war’s treasures, sees it as a kind of stand-in for the sorrows of distance and loss, the agonies of the home front and those left behind, as well as those of the battlefield.” Photograph: Smithsonian Institution

When the guns at Gettysburg had stopped booming and the dust had settled, a photograph was plucked from the dirt. It had been trampled, its lovely grey and gilt frame had been crushed and dirtied, but the hand-tinted ambrotype it contained was still visible. It showed a woman with dark hair pulled neatly back from her brow holding a baby on her lap. Both the woman and the baby looked toward the camera. The baby’s arm and the woman’s hand were visible. One can easily imagine the soldier whose precious image of home this was gazing at that arm, at that hand, at that bared, beloved brow.

One can imagine him, as many might be moved to, before the three fateful days of battle, taking the photo out of his pack and peering at it. Maybe he sang as he peered. Sang to the child then spoke to the woman. Maybe his comrades sat close to him so he whispered to her, said things meant for her ears alone. Photos circulated widely in the decades before the war but were still mysterious, still seemed to speak to uncanny presence. Holding the photo aloft, or even just knowing it was in his pack or pocket, the man may have felt as if his wife and child were with him, physically present, that he was almost home. Probably death was on his mind. How could it not have been? A great fight was coming. Knowing that his wife and child were close by, even just as images, must have been a comfort.

So powerful was the desire during that period to have loved ones in attendance at the moment of death that there are recorded instances of dying soldiers surrounding themselves with photographs in lieu of actual family. Perhaps the man who owned the photograph we are considering planned, if his death was gradual enough, to do just that. Perhaps, given that the photo was found in the dirt, he had done it or had a friend do it for him, and the photo was left behind when his dead body was carted away.

We don’t know who that soldier was. We don’t know who the woman and baby were either. We don’t know if the soldier survived the long days of battle at Gettysburg or didn’t. Perhaps the picture is of the soldier’s sister or cousin, one he didn’t much care for. Maybe he was holding the photo for an acquaintance or had himself found it and picked it up as a memento somewhere along the way and had no connection to it whatsoever.

The woman’s expression seems hard even by the unsmiling photographic standards of the day. Perhaps the man and the woman were indeed husband and wife, but were estranged. Perhaps he didn’t want to go home to them. Perhaps rather than placing it lovingly beside him, the soldier flung the picture away as he lay expiring on the field. Or as he marched away or was carried off from the fight.

Maybe the photo was of the man’s daughter. Perhaps she was mad at him for having left to go to war. But still she loved him wildly. He was her dearest papa. Or uncle, or grandfather. She cut deep grooves in the back of the cello she played each of the endless days he was gone.

We can go farther. Women disguised themselves and fought as men in the Civil War. Upwards of a thousand of them. We know some of them fought at Gettysburg. This photo could as easily as anything else be of a woman who went to war and fought in disguise, adding the burden of discovery (which almost always meant expulsion, along with humiliation and perhaps worse) to the burden of being shot at and half-starved and forced to work and march and live in filth like any ordinary soldier. Perhaps she carried it with her as a reminder of what she had left behind: her child, her Sunday finery, her former self. One can imagine the letter she wrote home asking for it – to her parents who had care of the child, or to the husband she loved or hated, who was consumptive or lame or half-blind or suffered dizzy spells or was just plain afraid and couldn’t fight: “Send that picture of me with little Esther. It may pain you to let it go but I find I cannot remember who I was before I came to this terrible place and would look with gratefulness upon that woman I once was…”

Writing a few years ago for the New York Times, Tony Horwitz, author of Confederates in the Attic, sagely opined, “It’s a bottomless treasure, this Civil War, much of it encrusted in myth or still unexplored. Which is why, a century and a half later, it still claims our attention and remembrance.”

The Smithsonian Institution, which now has care of the Ambrotype I have been discussing, and which must surely be counted as one of war’s treasures, sees it as a kind of stand-in for the sorrows of distance and loss, the agonies of the home front and those left behind, as well as those of the battlefield. The compilers of Smithsonian Civil War: Inside the National Collection, in which the image and accompanying commentary appear, have created a narrative that posits a killed husband and a duly bereaved family, and they may well – “may well” is the phrase used to introduce their hypothesis – be absolutely right about it. But the truth remains that until some unguessed at documentation is uncovered, we don’t know who or what we are looking at when we consider this evocative relic of the war. We only know where and when it was found, what it appears to show, and that it has been trampled by time and the terrible circumstance of one of history’s greatest battles.

Neverhome by Laird Hunt (Chatto & Windus, £12.99) is reviewed by Eileen Battersby in The Irish Times on Saturday, January 31st