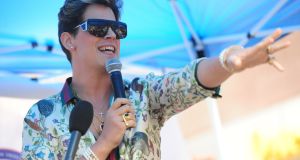 Milo Yiannopoulos at an alt-right rally in May. His time is over says Angela Nagle: ‘The problem is they didn’t actually have any ideas.’ Photograph: Susan Watts/NY Daily News via Getty Images

“Every time I look on my phone and see a lot of activity on Twitter I think: ‘right, this is the moment when they come for me’,” says Angela Nagle. She’s talking about the army of Pepe-the-Frog-avatared trolls who often bombard female writers with offensive messages and threats.

Nagle is the author of an excellent new book Kill All Normies: The Online Culture Wars from Tumblr and 4chan to the Alt-Right and Trump.

Seven years ago she began tracing the evolution of a range of weird and offensive online communities, from the nihilistic trollish denizens of 4chan to more bitter anti-feminist communities scattered around the internet. Back then it was a niche interest. “When I explained to people what I was writing about they always seemed baffled and thought it was such an obscure thing to be interested in.”

More recently, however, she has watched as these groups adopted anti-immigration ethno-nationalistic obsessions and coalesced into a Trump supporting “alt-right” (many accurately observe that they should be called the ‘far right’).

Their view was basically that ‘irrational female brains’ were like systems they could hack. It’s a short journey from that to racism

They have developed a surprisingly high profile. Mainstream columnists use their terminology when they discuss “Social Justice Warriors” and “Generation Snowflake.”

Trump parrots their talking points (his concern with migration in Sweden, for example) and has gone so far as to hire the head of Breitbart, one of the alt-right’s online hubs, as a key adviser.

Nagle’s initial interest in these groups, she says, was piqued by their style of engagement, which utilised the sort of irony-filled transgressive tactics formerly associated with left-wing counterculture. “They were to the right but they didn’t have any conservative politics. They trolled and pranked people and were good at making funny memes and using shock tactics.”

In those days, she says, when congregated on webpages like 4chan they seemed wilfully apolitical. They often did horrible things. They trolled memorial pages and bullied suicidal teenagers. They thrived on anonymity and they targeted those who dared to be sincere or, indeed, female.

“They were totally morally degenerate… but they were nihilistic about it. They didn’t have any politics other than some vague sense of being anti-establishment.”

But the politics were already there in a nascent form. Even in the more goal-focused web groups of pick-up artists there was a seed of ideology. “Their view was basically that ‘irrational female brains’ were like systems they could hack. It’s a short journey from that to racism because they’re not viewing people as human beings. And it’s a pushback against the [left wing] idea that gender and race are socially constructed.”

Over time a general anti-liberal politics began to take shape. They used the transgressive style of the countercultural left “but they changed the content. Their view was that the dominant ideology now was liberalism, so if you wanted to be transgressive that’s what you transgress against.”

Before long this mutated into a virulent strain of white male identity politics predicated on the notion that feminism and immigration were destroying civilisation.

The use of the term “red pill” became widespread, referring to the scene in The Matrix where a character takes a red pill and sees reality as it really is. Here it is used, says Nagle, to mean “waking up from the liberal reality you didn’t realise you’d been indoctrinated in by your parents and teachers”.

The event that made many of them more explicitly political and brought them mainstream attention was Gamergate in 2014 where, Nagle explains, “feminist [video] games creators and critics [like Anita Sarkeesian] became the target of abuse because they were seen as trying to destroy video games with left-wing propaganda.

“The guys said [some of the creators] were sleeping with the reviewers and that’s why their games were getting good reviews. Even if you took everything that they were saying as true it was still this absolutely outrageous and absurd overreaction.”

It became a key battle in an online culture war (later battles included the racist and misogynistic targeting of the all-female cast of the 2016 Ghostbusters film). It was, says Nagle, “the crucible of their movement.”

It made the reputations of several people who later became figureheads, most notably the now-disgraced former Breitbart writer Milo Yiannopoulos. Yiannopoulos and others, like the former men’s rights activist and conspiracy theorist Mike Cernovich and Vice co-founder Gavin McInnes, wrapped their more offensive opinions in slippery layers of irony, and Nagle refers to them as “the alt-light”.

“These are the figures who were, indeed, misogynistic and racist, but not so much as to bar them entry from mainstream talk shows or, in some instances, the White House.

“I have no idea what someone like Milo really believes,” says Nagle. “But I feel like he’s very useful for people to the right of him. He helped to break down taboos around speaking about race and gender in particular ways.”

As did, a couple of years later, another major figure now associated with the alt-right: Donald Trump. The appeal of Trump to the online trolls made total sense.

“A guy who was chanting ‘build a wall’ and ‘lock her up’ is so appealing to them and so shocking to the rest of society,” she says. “Essentially he broke a taboo around immigration and around how we talk about women, and he did so and managed to become the president…

“And Trump is reading Breitbart and [the Breitbart writers] are reading stuff to the right of them, so the connection is close enough.”

This feedback loop is giving the so-called alt-right their current cultural moment. But Nagle isn’t interested only in right-wing groups. Her book also covers a more-liberal-than-thou culture of public shaming found among some smug and complacent elements of the online left (she writes about vicious squabbles that ensued after the late Mark Fisher’s essay on the subject, Exiting the Vampire Castle). And she argues that “the relationship [between the online left and right] is symbiotic in some ways.”

However, she stresses that she doesn’t think that there’s any moral equivalence. She was taken aback by a recent headline about her book that read “Kill All Normies is about the alt-right but the left ends up looking worse”.

A lot of these guys are saying ‘How come my grandfather was able to have a house and a car on a one-income household?'

This is the trend she’s seeing now. The more transgressive irony of the original 4chan trolls is giving way to no less offensive but more conventional far-right ideologies. She also thinks the time of figures like Yiannopoulos are over.

“They were good at taboo-breaking and were really good at media.... The problem is they didn’t actually have any ideas.”

Unfortunately, the people who do have ideas are more explicitly racist figures like Richard Spencer (who famously gave a Nazi salute in honour of Trump at a conference), who are increasingly taking their activism into the offline world with rallies and violent campus protests.

“The Overton Window [the window of political acceptability] had moved more than [the alt light] realised,” says Nagle.

Things move quickly online. She had to rewrite parts of her book after Yiannopoulos’s downfall (a recording was uncovered in which he praised pederasty). She notes that many other alt-right figures have turned on Trump since she finished the book.

Ultimately these online right-wing movements are a destructive perversion of identity politics coming from young men who feel disappointed with their lives. Nagle thinks this is an ineffective prescription for what ails them.

“A lot of these guys are saying ‘How come my grandfather was able to have a house and a car on a one-income household?’ But that’s an economic problem… I think a lot of the answers to the problems they’re looking at should actually come from the left.”

She also thinks that society will tire of “transgression” as a tactic. “We’ve inherited this avant-garde sensibility where we value shock and transgression but when those aesthetic sensibilities are at their peak with fascists, at that point you have to say, ‘Hasn’t this outlasted its usefulness?’”

She is curious how the book will be received. She was recently discussed offensively on a far-right website, she says, but they seemed largely perturbed that she hadn’t mentioned them in her book (“They’re not that significant”). She has received some harassment online (“I just block them now”) and some right-wing Tweeters have quibbled with details. “I wanted to say, ‘Yeah but it’s not for you – it’s for other people to look at your weirdness.’”

She thinks that dwelling on these subjects isn’t necessarily good for her, “but it hasn’t really damaged my faith in humanity, because [these people are] not representative. I just go outside my front door and realise the world doesn’t look anything like the online world they’ve constructed.”