JRR Tolkien's first Middle Earth story, The Fall of Gondolin, to be published 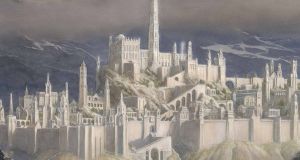 Detail from Alan Lee’s cover illustration for 'The Fall of Gondolin'. Photograph: HarperCollins

JRR Tolkien’s The Fall of Gondolin, his tale of a beautiful, mysterious city destroyed by dark forces which The Lord of the Rings author called “the first real story” of Middle-earth, will be published in August.

The Fall of Gondolin will be the second “new” Tolkien work to be released in two years, following the release of Beren and Lúthien in May 2017. Edited by Tolkien’s son Christopher Tolkien, and illustrated by The Hobbit and The Lord of the Rings artist Alan Lee, its announcement came as a surprise even to Tolkien scholars: Christopher Tolkien, who is now 93, had described Beren and Lúthien in a preface as “(presumptively) my last book in the long series of editions of my father’s writings”.

“That preface had a certain valedictory quality to it – he was reminiscing about his first encounter with his father’s work,” said John Garth, author of Tolkien and the Great War. “But here it is.”

Garth said the story was written by Tolkien while he was in hospital and convalescing directly after the Battle of the Somme. “It’s a quest story with a reluctant hero who turns into a genuine hero – it’s a template for everything Tolkien wrote afterwards,” he said. “It has a dark lord, our first encounter with orcs and Balrogs – it’s really Tolkien limbering up for what he would be doing later.”

The book, said publisher HarperCollins, sets the “uttermost evil” of Morgoth against the sea-god Ulmo. Morgoth is trying to discover and destroy the hidden city of Gondolin, while Ulmo is supporting the Noldor, the kindred of the Elves who live in the city.

The story follows one of the Noldor, Tuor who sets out to find Gondolin; during his journey, he experiences what the publisher described as “one of the most arresting moments in the history of Middle-earth”: when Ulmo, the sea-god, rises out of the ocean during a storm.

When Tuor arrives in Gondolin, he becomes a great man and the father of Eärendel, an important character in Tolkien’s The Silmarillion. But Morgoth attacks, with Balrogs, dragons and orcs, and as the city falls, Tuor, his wife Idril and the child Eärendel escape, “looking back from a cleft in the mountains as they flee southward, at the blazing wreckage of their city”.

“They were journeying into a new story, the Tale of Eärendel, which Tolkien never wrote, but which is sketched out in this book from other sources,” said HarperCollins.

Garth said The Fall of Gondolin contains Tolkien’s “biggest battle narrative outside of The Lord of the Rings”, but he predicted the “capstone” of the book would be the “exquisite” piece of writing in which Tolkien attempted to tell the whole story again, in the novelistic style of The Lord of the Rings. “In the first [finished version] of the story, you feel like you’re reading The Iliad,” he said. “This one [which is unfinished], is more natural.”

According to HarperCollins, Tolkien saw The Fall of Gondolin as one of his three “great tales” of the Elder Days, along with Beren and Lúthien and The Children of Húrin. The latter title was also a bestseller, after Christopher Tolkien completed the text left behind by his father and published it in 2007. – Guardian Service