Review: For all its wisdom, humour and ease, you wish ‘Jott’ was more formally Beckettian 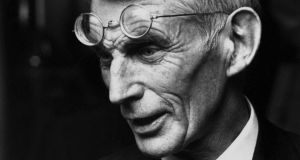 In 1930s London, Irish men Arthur Bourne and Louis Molyneux go on long, almost silent walks. One is a doctor working on psychiatric wards. One is an unpublished, unemployable writer. Molyneux’s book Jott – which shares the title with the novel we are reading – is described as being in a “customary state of crisis”. He never lets on what he is writing, talking instead about “the agonies involved in failing to write it”. After “hiding out in galleries, museums and pubs”, Louis would “go back to his digs and try to work, until the attempt brought him to such despair”.

Readers familiar with the history of modernism might recognise Louis’s despair as similar to that of a towering figure of 20th-century letters. Between all the hopeless staring at walls, it is surprising that the Samuel Beckett of literary anecdote put pen to paper at all. Indeed, Booker-nominated author Sam Thompson’s novel is based on, but also deliberately counterfactual to, the friendship his psychiatrist grandfather, Geoffrey Thompson, had with that Nobel laureate. Thompson snr helped Beckett research Murphy – whose protagonist worked as a nurse in mental hospitals, and later ends up in one – by allowing him access to patients against regulations.

The friendship in Jott is comically unbalanced. Louis believes it is “the artist’s obligation to exploit and betray all around him for the sake of his work” and often shows little interest in Arthur unless he reveals information he can glean. He ingratiates himself with one of Arthur’s patients for novel research, then drops him, telling Arthur: “I’ve got what I need now ... No reason to keep seeing him.” And like many magnetic presences, he is naturally jealous. When Arthur starts to court gymnastics teacher and women’s lib activist Sarah, Louis tries to convince him that she is a dull fascist.

But though the plot sometimes flaunts a cynical view of human connection, the novel itself is dramatically un-Beckettian, belonging as it does not to Louis but to Arthur. Though there are modernist references – erudite, bawdy puns, parodies galore (“we must away with haste for life is short and yet there he sits on his ars longa,” writes Louis in an early experiment) – the innovations of that time are softly couched in an engaging, formally unchallenging narrative style. Still, as the book is about the dawning understanding of the life of the mind, we see Arthur rethink his thoughts mid-flow. Long reminiscences slot nicely into the main narrative – sometimes one contained within the other – quite satisfyingly.

The whole book, with it’s easy generosity, is a good-natured critique of the Beckett worldview: the bleakness; the young men “with no obvious redeeming features” who have multiple women clamouring for their favour. As such, Jott belongs to a small but notable microgenre of novels about novelists that don’t aspire to the style of their real analogues. Colm Tóibín’s The Master was similar. Written in an unassuming style nothing like that of the late phase Henry James it portrayed, it sometimes left you wishing for a bit more Jamesian flare. And sometimes, for all its wisdom, humour and ease, you wish Jott was a bit more formally Beckettian: a bit bleaker and sharper, more difficult. But Jott is not a novel about Beckett. It is about a fictional version of a generous friend who enabled a version of Beckett; one who is capable of lovely thoughts at the other end of the emotional spectrum: “It only matters that once, long ago, he came and begged you to help him, and you helped, and now you owe him your care forever”.