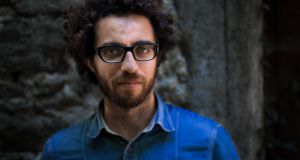 Mazen Maarouf: Palestinian-Icelandic author has had his first novel translated into English

Book Title:
Jokes for the Gunmen

Did you hear the one about the man trapped in a warzone where hundreds around him die every day? In real life, we don’t tell jokes about war but fiction can successfully combine the two. From Evelyn Waugh’s satirical journalism in Scoop, to the antics of Joseph Heller’s Catch 22, to Milan Kundera post-war disillusionment in The Joke, to Jesse Armstrong’s recent novel Love, Sex and Other Foreign Policy Goals, the truth and absurdity of war can often be revealed by humour.

Mazen Maarouf’s Jokes for the Gunmen is a debut collection that returns over and over again to the subject of humour as its characters try to make sense of life in a Lebanese warzone. Translated from the Arabic by Jonathan Wright, the 12 stories offer a surreal look at the impact of war on the civilian population. By mixing the domestic with the horrific, the irreality of war comes through as we watch his characters live through unimaginable violence.

The titular opening story, by far the longest in the collection, is narrated by a young boy whose schoolmates compete with each other by telling stories of how their fathers beat them. At home, the narrator is chillingly immune to the plight of his deaf twin brother, robbing him of his pocket money and, in an absurd twist, deciding to sell his brother’s organs to a gunman in an effort to restore their father’s reputation. He approaches the gunman after school with his offer: “I left the matter of the two hearts till the end. For the shock value. Like a shell that hits a bus full of disabled children.” In Maarouf’s chaotic world, the simile soon proves horribly prophetic. Meanwhile, the jokes the boy’s father tells the gunmen are more about survival than laughs: “As soon as he got a detail of the joke wrong, he’d get a slap on his face and one of them would say, ‘That’s not exactly what you said the first time’.”

Born in Beirut in the 1970s, Maarouf is a Palestinian-Icelandic poet and journalist who has published three poetry collections and two short story collections. Jokes for the Gunmen is his first book to be translated into English. It won the inaugural Al-Multaqa Prize in 2016, a $20,000 pan-Arab award celebrating the short story form. There are overtones of writers like Etgar Keret in Maarouf’s stories, or the dark tales of Roald Dahl whose twisted logic and embattled child protagonists take on new resonance in wartime.

The child narrators in Jokes are an intriguing blend of innocence, optimism and vengeance. In the face of so much senseless death, they accept the absurd predicaments of their family members. In Matador, a nephew gives this summary of his fantasist uncle: “My uncle died on the Tuesday and came back to life on the Thursday, only to find that his suit was too baggy, although he hadn’t lost an ounce of weight.”

Cinema is a surreal and moving tale about a young boy sheltering in a theatre as Beirut is bombed. His mother doles out triangles of cheese to himself and his sister but then a bomb hits the theatre and leaves the boy with only a cow for company: “The cow appeared and looked at me through the rectangular hole in the projection room.” In Biscuits, an older son brings his mother back to the care home after a day out, while trying to avoid a collision with an old man who can turn them to biscuits with his boxing gloves. In Angel of Death the mirthless narrator doesn’t understand why laughter exists and refuses to grant his mother’s dying wish that he smile. The joke, or at least the preoccupation with humour, wears a bit thin in this story, as it does in an earlier story where the narrator searches for material that might be funny. Other-People’s-Dreams Syndrome initially appears to go down a similar route – are other people’s dreams ever interesting? –- but soon turns into a clever, Kafkaesque riff on the subject where the dreamlike state throws up some horrifying realities: “The boy shuddered like a hen that’s had hot water poured on it.”

The closing stories of the collection are preoccupied with sex and birth, but remain extremely absurdist. We get a voyeuristic dwarf watching a couple have sex from his balcony, a woman who marries a bull, and a macabre story of a couple who keep a clot of blood in a jar following a failed pregnancy: “On 28 August Munir will be a year older, so we’ll have a party. We’ve been doing this ever since Munir was eight, specifically since we found out that my wife’s womb was irreparably damaged in the operation and will never be able to carry a foetus again.” An unsettling collection that seeks to showcase loss in all its varied forms.