John Mitchel and Jenny Verner: a love story more romantic than Gone with the Wind

Elopement, rebellion, deportation, Van Diemen’s Land, Paris, the Confederacy, the Fenians and Home Rule are the key words in this love story. Beginning and ending in Ulster, it is a story of both paradox and irony 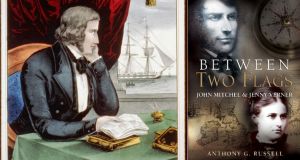 The story of John Mitchel and Jenny Verner may be heroic but their support of slavery has placed their legacy in a moral desert from which the waters of justification have long evaporated. Yet, for romance, for adventure, for suffering for what they believed in, for improbable tragedy, the story of Jenny Verner and John Mitchel is compelling

In Between Two Flags: John Mitchel and Jenny Verner, I make a remarkable claim; that the story of love story of the Ulster couple John Mitchel and Jenny Verner is more adventurous, more romantic than The Quiet Man, Ryan’s Daughter, Titanic and especially Gone with the Wind. Those love stories were fiction. John Mitchel and Jenny Verner were a passionate flesh and blood Ulster couple. At the time of the Great Famine and the American Civil War they were involved in rebellions against both the British and American governments. Thus the two flags are the Irish Tricolour and the Confederate battle flag. It was Mitchel who declared that the tricolour should be the national banner of Ireland. He and Jenny lost two sons, with a third maimed, fighting for the Confederate flag.

Elopement, rebellion, deportation, Van Diemen’s Land, Paris, the Confederacy, the Fenians and Home Rule are the key words in the love story of John Mitchel and Jenny Verner. Beginning and ending in Ulster, it is a story of both paradox and irony.

There is the central paradox of Mitchel, the great 19th Century Irish republican who during the Great Famine thundered against the British, and for the peasant, but later supported, not only the institution or slavery but also the reopening of the African slave trade. Even the fervent Confederate, Edmund Ruffin, who took his own life when the South lost, thought Mitchel’s writing too extreme.

There is the irony of a couple from the Protestant and Dissenting traditions, who did not object to their daughters’ conversion to Catholicism, supporting an evil institution neither was ever going to materially benefit from. They would not have a slave about the place.

In Between Two Flags I also attempt to answer the question why, on the 200th anniversary of his birth, John Mitchel, whom Pearse considered the writer “of the last of the four gospels of Irish nationality, the last and the fieriest” and whom de Valera greatly admired, is the forgotten republican hero?

The answer, I suggest, lies not only with John Mitchel’s support of the Confederacy and slavery but also with the course of Irish history since the 1960s. De Valera’s St Patrick’s Day 1943 broadcast is pure Mitchel. In his imaginative, meandering Jail Journal, Michel venerated the unquestioning “independent famer, cultivating his small demense”. DeValera imagined “the home of a people who valued material wealth only as a basis for right living, of a people who, satisfied with frugal comfort, devoted their leisure to the things of the spirit – a land whose countryside would be bright with cosy homesteads.” Twenty years later Lemass dismantled de Valera’s “dreary paradise” and moved Ireland towards membership of the European Economic Community. From this time Mitchel’s name, if spoken, was softly spoken in political, even republican circles. Articles and books from academia became more critical – “…he became a bête noir for many historians”.

Yet the story of Mitchel and Verner is heroic. From Newry in 1836, the 21-year old John and the 15-year-old Jenny tried to elope, After they had been tracked to Chester, in England, by her “father” Captain James Verner, whose family was involved in setting up the Orange Order, Mitchel was imprisoned in Kilmainham gaol. The young couple eventually married in Drumcree Church (yes, that one) and settled into a life of middle-class, domestic bliss in Newry and Banbridge until John, by now a lawyer, became involved with The Nation. John and Jenny moved to Dublin where, at the height of the Great Famine, Mitchel’s “physical force” writing and his condemnation of British famine policy angered Dublin Castle. He wrote. “I saw Trevelyan’s claw in the vitals of those children: his red tape would draw them to death: in his Government laboratory he had prepared for them the typhus poison.” Mitchel was arrested, found guilty and exiled to Van Diemen’s land. An angry Jenny suggested any judge who deported a Young Irelander should be shot. On board ship Mitchel was treated as a gentleman and shared both the captain’s table and his best wine.

Following the 1848 Rebellion, Jenny and her five children sailed to join Mitchel in Van Diemen’s Land. Mitchel escaped and after many adventures made it, with Jenny and the family, to the US where he was feted, first in San Francisco and then, following a journey through a central American jungle, New York. For a time the Mitchels lived in a log cabin in Tennessee. When the American Civil War broke out they were in Paris, where John was acting as an Irish Republican agent. The Mitchels were divided into three parts on two continents. Two of the girls, Henrietta and Isabel, who had become Catholics, remained in a Paris convent. Jenny and their second girl, Minnie, went back to Newry and John and their youngest son, the 18-year-old Willie, ran the Union blockade to join John jr and James, now both Southern Army officers, in the Confederacy.

The civil war claimed the lives of young Willie in Picket’s charge at Gettysburg and Captain John C Mitchel as commander of Fort Sumter. James was maimed. Henrietta died in her Paris convent. Jenny travelled to Paris to get Isabel and then with her and Minnie ran a Union blockade, was shipwrecked and joined John in the Confederacy. As Richmond fell, Jenny suffered scenes like those later brought to the screen in Gone with The Wind.

After the war Ulysses S Grant imprisoned Mitchel. This time there was no trial, no recognition of his gentlemanly status and his health suffered badly. He was released after lobbying by the Fenians who sent him, alone this time, to Paris. He fell out with the Fenians and after visiting Henrietta’s grave returned to New York, and a life of embarrassing, genteel poverty. In 1874, sick and with failing eyesight, John Mitchel returned, a republican hero, to Ireland. In 1875 he died as the MP for Tipperary.

On Mitchel’s death, in an announcement in the Times, the Verners suggested Jenny was of uncertain birth, After a relatively comfortable and tranquil old age she died on the last night of the 19th century. Their grandson, John Purroy Mitchel, was mayor of New York.

The story of John Mitchel and Jenny Verner may be heroic but with President Obama in the White House, their support of slavery has placed their legacy in a moral desert from which the waters of justification have long evaporated. Yet, for romance, for adventure, for suffering for what they believed in, for improbable tragedy, the story of Jenny Verner and John Mitchel is compelling. This is evidenced by my bringing the Musical Love Story of John Mitchel and Jenny Verner across Ulster to the halls of Protestant, Dissenter and Catholic; including Drumcree Church of Ireland. In Between Two Flags, I have tried to tell that story with the heart of a novelist and the mind of an historian.

Anthony Russell is a recently retired academic and programme leader from Anglia Ruskin University. As an historical geographer, he was academic consultant to Ulster University and Dundalk Institute of Technology’s Borderlands degree. He has written and produced multimedia exhibitions on the Great Famine in south Ulster and north Leinster, and the 1798 Rebellion, for Newry and Mourne District Council. Along with Professor David A Wilson, University of Toronto, he is an academic advisor to the D’Arcy McGee summer school.