JG Farrell’s Novels: The Decline and Fall of the Human Condition 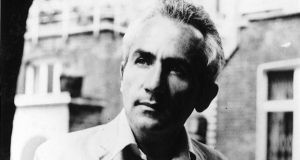 JG Farrell; his works “show people progressively stripped of the ideas that have been important to them, until all that is left is concern for the bare necessities of survival”.

Many fans of JG Farrell’s novels have made a pilgrimage over the years to his stark grave in Durrus, west Cork. If time and dedication allow, some continue on to locate the rock overlooking the sea near Kilcrohane from which Farrell was swept to his death on August 11th, 1979. At both places, the impression is one of loneliness: of remoteness, emptiness and silence. Thoughts of loss tend to merge into a preoccupation with transience, at least until contemporary pressures bring the 21st century back into sharp focus. But during those quiet introspective moments, readers drawn there by a sheer love of Farrell’s books miss something encouragingly loud and insistent: that is the rising clamour from reinterpretation of his words generated by international academic debate.

Rebecca Ziegler, author of JG Farrell’s Novels: The Decline and Fall of the Human Condition, is addressing that specialised world exclusively, not the general reader. Her central argument is that the “Empire” novels – Troubles, The Siege of Krishnapur and The Singapore Grip, as well as the incomplete Hill Station – are concerned far less with the throes of Empire than with Farrell’s personal and pessimistic view of the human condition. She builds her case fastidiously, refusing to be sidetracked from her theme.

“This is what the human condition is like,” she points out, “fragile and disintegrating [. . .] with remarkable survival abilities.” Convincingly, she singles out Ehrendorf’s Second Law: “The human condition, in general and in particular, is slightly worse [ . . . ]at any given moment than at any preceding moment”– as her clinching evidence, because the Empire novels, as she rightly emphasises, are fundamentally about “the collapse of ideas”. Good intentions at the outset are doomed to fail. It is how and why they inexorably do fail – how Farrell handles this – that fascinates Ziegler, resulting in her penetrating approach.

The 3½ Empire novels (I prefer that simple word to her own description, the Empire series) illustrate the breakdown of the human condition. “All sorts of things”, she explains, “that human beings count on (whether justifiably or not) tend to go wrong for the characters. These include both material things – bodies, lands, and possessions – and more conceptual things – ideas, ceremonies, customs, symbols, communication, language, and even individual metaphors.” All Farrell’s books, she makes a point of stressing, “show people progressively stripped of the ideas that have been important to them, until all that is left is concern for the bare necessities of survival”. For “ideas” here, also read “ideals”.

Ziegler is convinced that one ideal alone impressed Farrell enough for his characters to retain their belief in it: that of the brotherhood of man. “Farrell”, she says elsewhere in her book, “evidently hoped that all human beings would work together harmoniously, like the parts of a healthy body, to achieve the brotherhood of man; hence his fondness for St Paul’s vision of the ideal human community as a well-functioning body [. . .] But what he actually saw happening in the world was a state of human society in which human beings exploit or destroy one another.”

Her patient, meticulous analysis throughout is as perceptive as it is generous. She might have ignored, or laid claim to, scholarly work already carried out, but instead she welcomes, with exact attribution, each commentator (her word) whom she credits as having contributed to the thinking behind this book. A glance at the bibliography alone reveals over 150 names, proving the impact of the expanding Post-Colonial sector in the number of critical books and studies now in print. It is the inclusiveness of her approach – the spirit infusing the whole book, as Farrell might, perhaps, have put it – that makes it so valuable for scholars, wherever they happen to be studying, both now and in future.

Without a doubt, however, it is the constant repetition of “Trinity Box” among the footnotes that reveals her crucial source of information, as well, occasionally, of inspiration. Trinity College Dublin is indeed fortunate to possess the continually expanding archive of Farrell papers, much of it previously unpublished or explored, that Ziegler diligently pinpoints. For those regular clues alone, ambitious newcomers to this field are going to be grateful.

Farrell, of course, is one of the rare “double” Booker winners: awarded in 1973 for The Siege of Krishnapur, and in 2010 (posthumously, in the “Lost” Booker) for Troubles. So it is unsurprising that his Empire novels are proving to be such a rich legacy for the most rigorous critic, as well as the appreciative, unquestioning general reader. For serious academics he has left treasures, as well as trifles, scattered liberally throughout his books.

What would Jim Farrell himself think of all this international probing and analysis? Speaking as his biographer, concerned more with the man himself than with the potential motivation behind individual words and matters of grammar or style, I’m sure that his feelings would be mixed. On the one hand, he would raise a sarcastic, mocking eyebrow, because his distrust of literary criticism remained profound, stemming from his first experience of being reviewed. On the other, I think he would be gratified, wholeheartedly believing, as he did, such concentration to be his due. Initial exasperation overcome, he might well experience a stab of fellow-feeling – certainly he knew all about the dedication and addictive euphoria of research.

I imagine he might even tip his hat, metaphorically, to Rebecca Ziegler, in recognition of the diligence and respect behind her work. Her intelligent book is both a tribute and a triumph.