Bono and Guggi among guests at unveiling of plaque 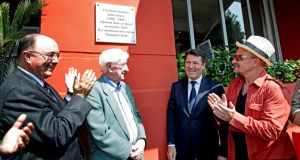 (From left to right) Ambassador Paul Kavanagh, John Montague, Mayor of Nice Christian Estrosi and Bono at the inauguration of the plaque to James Joyce on the Promenade des Anglais in Nice.

A mixed assembly of diplomats, city councillors, writers and a rock star gathered on the Promenade des Anglais in Nice yesterday to commemorate James Joyce’s brief stay at the Hôtel Suisse in 1922.

The sojourn was historic because Joyce began work on Finnegans Wake, initially called Work in Progress. He would devote 17 years – half his writing life – to the book.

Plaque unveiled
Mr Kavanagh and Mr Estrosi pulled a cord and the curtain fell from the commemorative plaque. “We raised a glass of Jameson to Jimmy Joyce,” said Pierre Joannon, the Irish Consul General on the Côte d’Azur.

“Joyce said Jameson was so good because it was made with Liffey water, mud and all.”

Mr Deane mentioned the importance of Nice to businessman and former diplomat Michael Lillis. In 2011, four couples with ties to Ireland and the Côte d’Azur lunched together in Nice: Michael and Caroline Lillis; Pierre and Annick Joannon; poet John Montague and his wife Elizabeth Wassell; and U2 manager Paul McGuinness and his wife Kathy Gilfillan.

It was important to commemorate Joyce’s stay in Nice, they decided. Mr Joannon wrote to the mayor, secured permission from the Hôtel Suisse, and saw the project through votes by Nice city council and the commission for street names and commemorative plaques.

In the autumn of 1922, Joyce fretted about reviews of Ulysses, published earlier that year. His teeth hurt, and he was losing his sight. “I have decided to give up my flat in Paris and take one [in Nice] so as not to run the risks of a cold and damp Paris winter,” he wrote to his benefactor, Harriet Shaw Weaver, on arriving at the Hôtel Suisse. “Flats are numerous here and much cheaper than in Paris.”

Montague read a poem about Joyce at the event. Joyce “was the main influence on my boyhood”, he said. “Any Irish Catholic boy who read A Portrait of the Artist as a Young Man was changed completely.”

Harvesting material
On his way to Nice, Joyce stopped in Dijon to get an estimate for a ‘third edition’ of Ulysses.* “He started doing some corrections in a child’s copy book,” said Mr Deane. “After a page or two, he complains of boredom, and begins taking notes from newspapers, harvesting material for later.

“This is where he drops Ulysses. He found writing a new book a more interesting use of his time. It’s like a photograph: you see James Joyce sitting in the hotel, facing the Baie des Anges, taking notes from the Daily Mail and The Irish Times, and he’s launched.”