The Inishark story entered a soup I was already brewing of opposing sisters, the Salem witch burnings, Maine lighthouses, Irish fairy stories and the lives of saints 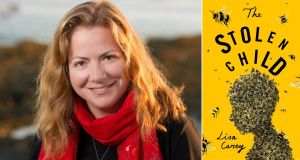 Lisa Carey: Not all novels come to you in a shivering flash, like a dream. This one did

I went to Inishbofin for the first time in 1995, led by a guidebook that claimed it was the sort of place people went for a weekend and stayed the whole summer. I was writing my first novel, and based my fictional island on Inishbofin’s stark, stunning landscape. My second novel was also set on an island, this time off the coast of Maine. So by the time I went to write my fifth I had absolutely no intention of writing anything set on an island, certainly not one in Ireland. I safely could have said that’s exactly what I wouldn’t be writing. If every writer has only one story in them that they get to tell over and over again, than mine appears to be surrounded by water.

The Stolen Child began when I watched the documentary, Death of an Island, by Kieran Concannon. It is about the evacuation of Inishbofin’s neighboring island, Inishark, which was once home to hundreds of families. The combined blows of the famine, two world wars and Irish emigration dwindled the population down to 23 residents by 1960.

Inishbofin, with its natural harbour and sandy beaches, attracted sailboats and visitors and would eventually build a thriving tourism business. But Inishark’s harbour was a dangerous cove that could only be navigated during the right tide by experienced locals. It had no electricity, phone lines or doctors, and was on its own in an emergency. The government offered the few remaining residents houses on the mainland. After the sea killed three young men on their way back from Mass on Easter Sunday, the islanders had too few men to handle their boats. They left for Claddaduff, a village that overlooked their old home, and no one has lived on Inishark since. The documentary interviews people who have remembered the island in their dreams their entire lives.

Not all novels come to you in a shivering flash, like a dream. This one did. I knew I would write about a community’s final year on an Irish island, though my characters would not be the kind, generous, respectable people of that documentary, because, let’s face it, I don’t write characters like that. I would take the real evacuation and replace the community with one from my imagination. But the documentary remains, in my prologue, as a tribute to the real residents of Inishark.

I always say I don’t start a novel with one idea. I have to have at least five, all of which could be different novels and none of which have much in common. The Inishark story entered a soup I was already brewing of opposing sisters, the Salem witch burnings, Maine lighthouses, Irish fairy stories, and the lives of saints.

The Stolen Child is not an autobiographical novel; while writing it I was quite sure it had little to do with me, because the story was so difficult to manage and get a proper hold on. I have no healing powers, and I’ve never lived in a lighthouse, an orphanage or anywhere without electricity and plumbing, I am not afraid of fairy abduction and am happily married.

I wrote an entire draft that built toward one ending, then changed my mind while writing the last chapter and had to go back and redo the whole thing about five more times. But once I neared the final draft, and read the entire story out loud, I was shocked. It may not be about me or my life, but its themes, particularly motherhood and all its backstories and consequences – pregnancy, miscarriage, abortion, love, loneliness, worship and resentment, the inability to live in the moment because you’re too busy missing something else – had been in my life for years. It was nothing about me, and everything at the same time.

Still, it is other people’s worlds that I fall in love with. I have been to Inishark every summer since I first saw the film, going for day trips in a local boat that drops you off and picks you up according to the tide. You have to leap off the boat while it’s still running, just at the moment where it rises with a wave. The only residents are sheep now, and sunbathing seals, and rabbits, and occasionally that group of archaeologists, who camp there for two weeks every year no matter what the weather.

It is one of the most beautiful places I have ever seen, and yet I know, from being trapped on Bofin in a storm, how desolate it must have been at times. The houses are still there, their roofs fallen in, and if you visit with a local they will tell you the families that lived in each abandoned building, because they still remember. You can almost hear the children in the school playground, or the bells announcing Mass in the church. Two years ago a series of winter storms tore in half what remained of the cement pier that lined the cove. The graveyard, set perilously on a cliff side, is beginning to release the bones of its ancestors as the land succumbs to erosion.

I never saw Shark when it was populated, but I have visited its sister, Inishbofin, as well as their neighbour Inishturk, countless times over the last 21 years. I have been welcomed again and again by the wild landscape and the generous people; learned to understand the accents that required subtitles in the documentary; watched the babies from my first trip become adults manning the boat, serving Guinness, or playing music in the bar. I have spent lazy days sitting outside the pub, watching the silhouette of my son run back and forth on the hillside against a sunset that lasts for hours.

The Stolen Child by Lisa Carey is published in hardback by Weidenfeld and Nicholson , £14.99