Irresistible: Why We Can’t Stop Checking, Scrolling, Clicking and Watching

Book Review: Up to 40% of Americans have some sort of internet addcition, according to Adam Alter 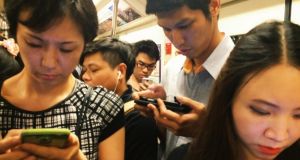 Online world: it can be hard to tell where the internet ends and the real world begins. Photograph: Natthawat Jamnapa/Moment Mobile/Getty

To call the plethora of addiction-themed popular psychology books a cottage industry would be an error of scale. It’s more like a factory operation.

One feature of this literature is a mutually congenial tendency to medicalise eccentric behaviour: the lustre of science lends moral authority to the quack author and a plaintive urgency to the reader’s perceived woes, driving each into the arms of the other.

But supposing the malady under discussion is so widespread that almost everybody has it? This is the dilemma highlighted in Irresistible: Why We Can’t Stop Checking, Scrolling, Clicking and Watching.

The online world is so intimately bound up in our daily lives that it can be hard to tell where the internet ends and the real world begins. Whereas junkies or winos wear their condition visibly, and invariably succumb to it in some calamitous life-affecting way, internet addicts are often inconspicuous, their habit humdrum and their social existence high functioning. As a patient at an internet-addiction clinic in Beijing tells Adam Alter, “It’s not a real disease. It’s a social phenomenon.”

According to some surveys about 40 per cent of Americans suffer from a form of internet addiction. If you’ve ever felt a Pavlovian glow at the “ding” of your inbox filling up, or if you happen to compulsively check your messages late at night, when you should be sleeping, you too might be hooked.

We have a problem, then, of definition: either the world is in the grip of a silent and dangerous epidemic or the parameters of normality, and of how we understand consciousness in general, are shifting ineluctably and forever.

I suspect it is the latter, but for the purposes of Irresistible, which belongs firmly in the genre of self-help-tinged sugary pseudoscience identifiable chiefly by their authors’ lavish deployment of the first-person plural, the disease angle is of primary interest.

In China internet addiction was declared a clinical disorder in 2008. The broader category of “behavioural addiction” was added to the list of diagnoses in the American Psychiatric Association’s Diagnostic and Statistical Manual of Mental Disorders in 2013.

A significant proportion of Alter’s book is actually concerned with behaviours that predate the digital revolution, by way of illustrating how behavioural addiction works. He revisits the cautionary tale of a successful gameshow contestant who ruined his own life trying to re-create the buzz of his early triumphs, dissects the moreishness of the cult Nintendo console game Tetris, and reflects on what the heroin habits of American GIs in Vietnam tell us about the importance of situational factors in driving addiction.

The addictiveness of 21st-century digital media is predicated on behavioural feedback. This is why the photo-sharing platform Instagram outstripped its precursor Hipstamatic: both apps were essentially the same in terms of their picture-editing features, but only Instagram had its own social network, which enabled people to gorge themselves on praise and approval.

The thrill of tending to imaginary crops was sufficiently addictive to propel the simulation game FarmVille to viral success; Kim Kardashian’s Hollywood followed a similar format, substituting it-girl celebrity for livestock and bringing into the gaming fold many millions of female users.

Both these games are free to download but ultimately involve players spending real cash: “One minute they’re novices passing time with a new, free game, and the next they’re apologizing for blowing the family budget on gameplay.”

If such pursuits are at least manifestly frivolous, other apps are perhaps all the more insidious for being superficially wholesome. Wearable technology that enables you to keep tabs on your physical wellbeing can become a trap for anyone prone to obsessive-compulsive tendencies.

Total abstinence is simply not an option, so the next best thing is to devise ways to mitigate and regulate the impulse. We are some 300 pages into the book when Alter discloses certain entrepreneurial ambitions in this general direction, whereupon he begins to sound less like a commentator and more like a contestant on Dragon’s Den.

Redesigning our “behavioural architecture” might be a laudable aim in the face of such myriad temptations, but equipping ourselves with devices programmed to administer electric shocks to ward off the urge – an aversion therapy straight out of A Clockwork Orange – surely isn’t the answer.

The most thought-provoking section of Irresistible considers the impact of digital immersion on the generation of children who are now two or three years old, and who have never known the world any different. Invoking the well-known YouTube clip of a child trying in vain to swipe on a paper magazine, Alter wonders how this technological utopia will imprint itself on the cognitive development of their young minds. We shall have to wait and see.