Actor talks feminism, being talked over and saying no with fifth and sixth year students 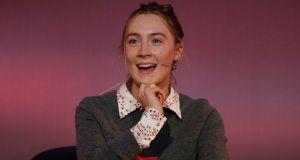 “Talking over you – I’m not really into that. When someone calls you a little lady or an angel – I’m not into that either.” Actor Saoirse Ronan, who has been nominated for an Oscar three times, is on stage in the unlikely surroundings of Scoil Chaitríona’s gym in Glasnevin in Dublin.

“I have noticed recently on a film I was working on, a couple of people could be incredibly chauvinistic. You could be on a film set every single day and know the story inside and out and you’re going to ask to a question about the next camera set-up with the director, and the cinematographer will be talking over you, and won’t stop talking. And I’d be: sorry, can you just? I was just in the middle of?’” Being ignored and talked over in this way would not have happened if she was a boy, she said. “It has only happened a handful of times but it does happen, and it is a bit mind-blowing when it does.”

It’s not often a room full of 150 teenagers is completely silent for an hour. But silent they were, listening with close attention to everything Ronan and her close friend, activist and author Scarlett Curtis, had to say. But then again, it’s not often a truly famous person – a proper Hollywood star, who was last seen in public at the Met Gala ball in New York earlier in the week – comes to visit your school.

The reason Ronan and Curtis are in Dublin is for a Penguin Talks event. It’s a new programme of talks for young people across Ireland and Britain, giving them the opportunity to hear from a famous author connected to the publisher: Michelle Obama spoke in a London school last year as part of the series. Ronan contributed a piece to the anthology Curtis has edited, called Feminists Don’t Wear Pink, and other lies. The school has an association with Fighting Words, which is why it was chosen.

“We thought it was a joke, or a rumour,” Clodagh Ní Uaidh, a transition-year student, said about hearing the news, not much more than a week ago, that Ronan was coming to their school. We were talking in the gym, just before the event, and she could not stop looking around her in amazement: at the televisions cameras and lighting rigs and lighting features that made the ceiling pink, and among all this, two basketball hoops on the wall. “It doesn’t usually look like this,” she marvelled.

When Ronan made a low-key entrance through the school doors at lunchtime, a score of students hung over the balcony overhead, agog. There had been another rumour: that she would arrive in her extraordinary dragon-themed Met dress. In the event, she wore apricot slacks, and a white shirt under a grey jumper with a hot-pink lightening blaze motif. It’s true: really famous people do exude an aura; nobody could stop looking at her until she was whisked away for tea and sandwiches in some staff room.

She mightn’t have worn the Met dress, but in the sound check on stage before the event, she and Curtis briefly discussed Lady Gaga’s outfits on that night, and then broke into a riff together of a few lines from Shallow, the singer’s Oscar-winning song.

Before the Q & A session with the students, the two friends had a discussion about feminism.

“What are the issues facing Irish women and girls now?“ Curtis asked.

“One thing that has helped me as a woman has been the Repeal of the Eighth,” Ronan said. “I feel like it opened the door. A lot of the things we felt and talked about in private, we are able to do in the open now.”

Ronan asked the teenage audience if they had seen the new movie Avengers: Endgame. She herself had. “It’s very long and very good. I love action films, but we’ve all grown up never seeing girls in those films, and now it is so cool to see girls in those roles. It’s important to see yourself up there.”

She urged the students – Scoil Chaitríona is a mixed school – to “really support the girls around you. That can have a massive impact”.

She explained that she was no longer on Facebook, but that it was important people treated their social media accounts with respect. “People can get a little mean on social media, and people do sometimes say horrible things,” she said, urging people to be kinder with their comments on others, and a low involuntary sigh of recognition went up around the room.

“In the job you do, you have to be strong and confident. Did that come naturally?” Curtis asked. “It was a bit of both,” Ronan said, explaining that after she made Lady Bird, there was a new level of interest in her. “Lady Bird was brilliant to do, but it was also a scary thing. There was a lot being asked of me, and I had to say ‘No, I’m not doing that’. It’s hard, talking to someone older than you, and saying no.”

“A lot of women feel they can’t say no,” Curtis said. Then she looked around the gym mischievously. “So when your teacher asks you to go to class, just say no.“ The crowd giggled.

One student asked Ronan to define her own particular form of feminism. “I think a feminist way of thinking is just giving value to myself and the work I want to do,” she said.

“I bet you’re all feminists now,” said Ronan, and everyone, including the teachers sitting at the back, laughed. For the record, nobody had to go back to class: they had the rest of the day off.