Before Sunday’s commemoration of the 1916 Easter Rising and the thousandth anniversary later this month of the Battle of Clontarf, we look at how fiction has dealt with our violent and disputed history of invasions, battles, insurrections and civil conflicts. 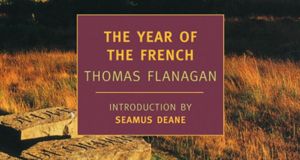 The Year of the French by Thomas Flanagan

Whereas this Anglo-Irish author’s earlier With Essex in Ireland (1890) presented the Elizabethan Conquest from the point of view of the conquerors, Maelcho portrays the seventeenth-century Desmond rebellion primarily from the native perspective. Neglected in comparison to her other work, a young W.B. Yeats noted of Maelcho that while “hardly so artistic as Essex, it shows far higher powers.” The book represents a sustained attempt at saying the unsayable, highlighting how often the Irish experience of war and conquest was misrepresented by the prevailing English language literature of that era.

A tale of betrayal and reprisal, Liam O’Flaherty’s The Informer won the James Tait Black Memorial Prize the year it was published. Set in the aftermath of the Irish Civil War, it tells the story of Gypo Nolan, a former policeman turned revolutionary who divulges the whereabouts of his friend Frankie McPhillip to the police and subsequently finds himself hunted for the betrayal. Born on Inis Mór, O’Flaherty was a prominent figure in the Irish literary renaissance and many of his novels were republished following his death in the 1984. The Informer inspired a 1935 film adaptation by John Ford, starring Victor McLaglen as Gypo, the man on the run from his revolutionary comrades.

Set against the backdrop of the Irish War of Independence, Elizabeth Bowen’s novel was published in 1929, less than a decade after the conflict had ended. Noting the huge impact it had on her as a writer, Bowen says in a preface to the work that of all her books and short stories The Last September was “nearest to my heart, [AND IT]had a deep, unclouded, spontaneous source. Though not poetic, it brims up with what could be the stuff of poetry, the sensations of youth. It is a work of instinct rather than knowledge.” Centred on the lives of the Naylor family, resident in the Cork country mansion Danielstown, the book is big house fiction at its best. It was made into a film in 1999 starring Michael Gambon and Maggie Smith, with the screenplay written by John Banville.

Guests of the Nation is the title story of the 1931 Frank O’Connor short story collection of the same name and tells of the execution of two Englishmen at the hands of the Irish Republican Army during the War of Independence. Split into four sections, the narrative looks at the complex relationships between prisoners and their guards, flitting between the interior and exterior conflicts that entrap the characters. The Irish revolution is the theme or setting for many of the collection’s stories, which combine to form an insightful study of war and the destruction it leaves in its wake.

A writer of both adult and children’s books, Lingard is best known for her young adult series Kevin and Sadie. The Twelfth Day of July is the first book in the series and focuses on the lives and relationships of Protestant siblings Sadie and Tommy and their Catholic counterparts Kevin and Brede. Scottish author Lingard grew up in Belfast and she uses a burgeoning romance between the two titular teenage heroes to explore the tense landscape of the Troubles in Northern Ireland.

The ‘terrible beauty’ of Ireland lies at the heart of Leon Uris’ saga Trinity, which gives an account of both Catholic and Protestant families amid the backdrop of historical events ranging from the Great Famine to the 1916 Rising. The Larkin and O’Neill clans are Catholic hill farmers from the fictional Donegal town of Ballyutogue whose sons Seamus and Conor are best friends, bonded by a love of books and history. Shifting the narrative to Belfast and Derry, Uris’ epic follows hero Conor Larkin as he learns of the oppression of his fellow countrymen at the hands of the British and forms a group with like-minded individuals bent on change. This group becomes the Irish Republican Brotherhood and later Sinn Féin. A portrait of a country divided by class, faith and prejudice, the book’s sequel Repedmption was published almost twenty years later in 1995 and is set in the years preceding the Rising.

An advance guard of Irish patriots land in Mayo in 1798, committed to freeing their country from English rule. American author Thomas Flanagan’s novel charts the short-lived insurgency and the vicious counterattack on the Irish people that it provoked. A professor specialising in Irish literature, Flanagan’s ambitious historical novel was named the most distinguished work of fiction by the National Book Critics circle the year it was published. A 1982 TV serial based on the book was accompanied by music arranged by The Chieftains and performed in conjunction with the RTE Concert Orchestra. Flanagan (1923 - 2002) grew up in Greenwich, Connecticut, where he ran the school newspaper with his friend Truman Capote.

Nothing Happens in Carmincross, Benedict Kiely (1985)

Protagonist Mervyn Kavanagh returns from America to his native Ulster at the height of the Troubles and finds the idyll of his homeland diminished by terrorism and political machinations. Back in Ireland to attend the wedding of a favourite niece after years as a teacher in the ‘semi-Deep South’, Mervyn comes across an array of differing responses to the Troubles and he struggles to understand the changes that have taken place since he’s been away. Nothing used to happen in Carmincross as Mervyn remembers it and the stranger returning to his village gives a sharp and perceptive take on what he witnesses.

Despite the Welsh-sounding name, Llywelyn - descended from Llywelyn the Great - is a proud Irish American who has lived in Ireland since 1985. Her second book Lion of Ireland, first published in 1980, tells the story of Brian Boru, Imperator Scottorum or Ireland’s high king. Llywelyn has since gone on to write almost one hundred historical novels, of which she has sold millions of copies. Her children’s novel, Brian Boru, Emperor of the Irish, won an Irish Children’s Book Trust Bisto Award in 1991. She has also just published 1014: Brian Boru and the Battle for Ireland (O’Brien Press).

A Star Called Henry is the first of three volumes in Roddy Doyle’s The Last Roundup series. Relating the first twenty years of Henry’s adventurous life in early twentieth-century Ireland, the book focuses predominantly on the war torn years between the 1916 rising and the eventual truce with Britain in 1921. Henry Smart’s first person narrative sees him become acquainted with various historical figures such as Michael Collins, Patrick Pearse and James Connolly as he joins the Irish Citizen Army to fight for his country’s freedom. A sequel Oh, Play That Thing was published in 2004, followed by a third volume The Dead Republic in 2010.