In Between Silence debuts in Manhattan

Sound pieces featuring storytelling from some of Ireland’s finest writers, set to music by composer and visual artist Stano, can be heard in New York 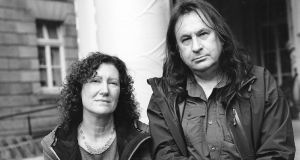 There are many ways to tell a story, six words on a postcard, a musical composition like Dvorak’s New World Symphony, standing on stage before a studio audience, or simply in conversation with a friend or loved one and often late at night. Now, Irish composer Stano, true to the motto of his punk roots to “be original”, offers up his contribution to this increasingly popular genre. In Between Silence, where we really exist is a collection of 40 stories and counting, recorded to customised organic musical tracks in a Dublin studio. Eleven of the stories will be screened in New York’s Barrow Street Theatre for 12 nights starting on December 3rd, with an official launch reception on December 6th.

Stano’s collection of storytelling is wide-ranging, covering familiar topics of racism, torture, loss, grief, memory, sexual abuse and abuse by the powerful. His bench of story tellers is deep, including authors Anne Enright, Roddy Doyle and Joseph O’Connor, and poets Theo Dorgan, Paula Meehan and Tony Curtis, among others.

The inspiration for the collection came from a story American harmonica player Brian Palm told the composer during another studio collaboration a few years ago. Stano was so taken with the memory Palm shared that day, he made him start over and tell it anew so that he could record it raw. Where It All Happened is a story about two Native American “code talkers” who served in the Korean War and what unfolded when they returned home from their tour of duty.

I’ve listened to these stories while standing among my fellow commuters on a railway station platform in the rain waiting for a train and while walking home along the trail in the woods near my house, with only the light of the moon to guide my path. You cannot help but be drawn in and moved by the spoken word against an at times haunting and yet beautiful musical backdrop. The emotions you feel vary from fear, sadness and anger to pride and joy. These stories are both ordinary and extraordinary.

Anne Enright’s reflections on her freedom as a child by the sea at Portrane in Dublin are juxtaposed against the nightmarish imprisonment of a young woman in a nearby asylum, who dared to tell the truth about a priest and the price she paid for speaking that truth to power. Enright learned of the dark secret in a late-night conversation while researching for one of her books in 2004. “A lot of things get told late at night,” Enright tells us in Portrane. The words are nonchalant and yet chill you to the bone. They make you want to sit up and lean in a little closer so as not to miss what comes next.

If this story doesn’t shake you in your boots, what happened to Thiru, a journalist from Sri Lanka, will. Tortured and left for dead for speaking out against his government, he was smuggled out of that country only to find himself marooned in Ireland’s direct provision system, which was established by the government to deal with an influx of over 4,000 refugees. Thiru wept as he told his story to Stano to the haunting sound of the beating of timpani drums.

These stories work because they are not performances. “I want to cut out the performance and bring it back to conversation,” Stano says. The stories are like the conversations you hear when gathered at home around what Theo Dorgan calls “the crackle of fire” or in the local pub late at night when there are just a few stragglers left sipping on their pints. Poet Paula Meehan taps into what she often calls her “poetic heartland”, that incubator of inspiration between the River Liffey and the Royal Canal in Dublin’s north inner city, to share her story. Fellow poet Tony Curtis brings to life the disturbing biography of Aboriginal writer Alf Taylor.

Indeed, Stano made a point of keeping the whole experience fresh during the production phase. There were no rehearsals. Each story teller was given one take. And editing was kept to a minimum. “I didn’t hear the story and they didn’t hear the music until I pressed play,” Stano said.

Stano’s wife and collaborator on the project, Denise Dunphy, recalls how her own story came about. Her younger brother, Adam, died tragically in 1998, just days before his son was born. She wanted to honour his memory in some way but struggled with how to do it. She remembers her husband finally saying to her: “You’re coming into the studio tomorrow”. With that she jotted down some thoughts on paper, ruminated on them overnight, and showed up the next day to share her earliest memories of her brother and their relationship with their mother. Adam’s 18-year-old son heard the story for the first time in May and wept. “This is the first time I’ve ever cried for my dad,” he told Dunphy at the time. “He finally understood the loss, he finally got it,” Dunphy said.

This idea of walking into a studio, standing up to a microphone, and telling your story cold might seem ludicrous and risky in this era of highly produced story-telling podcasts on National Public Radio here in the US such as This American Life, Embedded, The Moth and Radio Lab, but it’s storytelling in its rawest form. It’s a tradition we Irish know very well. The trappings of production have been stripped away.

What is produced is the music. Stano manipulated the sound produced by the musicians on these tracks. He pushed them to go beyond their comfort zones, drop their preconceived notions of what they were about to do, and just experiment.

“The music responds to the story and the story responds to the music,” Stano told me. The result is rewarding as evidenced by former Middle East hostage Brian Keenan’s story. Stano recalls him in the studio starting to tell his own tale, halting briefly, and changing gears in response to the soundtrack he was hearing in his headphones. “I just got lost in the music,” Keenan told the composer after he finished his take. His story is not what you expect and like the others in this collection it will surprise you.

Presenting a selection of the stories in a 67-minute film only enhances their effect. “It was the darkness that allowed [theatregoers in Dublin] to experience the emotion.They just listened to the voices and the music brought them in. The darkness can be so liberating,” Dunphy said.

Stano’s biggest challenge may be handling the exponential growth of this new art form. Other artists are keen to participate in the project and tell their stories. And he has received interest from people in the mental health and prison systems in Dublin, who think the storytelling may have therapeutic value for residents and inmates alike. Stano and Dunphy are naturally delighted with the response, but what matters to them is the truism spoken by another participant, photographer John Minihan, who said, “What remains is the photograph”. In other words, what matters is the final product.

“What remains is your story, your work, your music. That’s what matters in the end,” said Stano.

Emmanuel Touhey is a freelance writer based in Washington, DC