If Cats Disappeared From the World review: Japanese magic tale 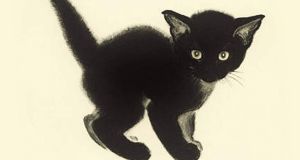 When the narrator, a young postman is diagnosed with an inoperable brain tumour and commences his bucket list, it isn’t long before the devil appears in the form of a doppelganger

Book Title:
If Cats Disappeared From The World

At the beginning of Genki Kawamura’s magic tale If Cats Disappeared from the World, we’re told that “In Japanese, there’s a whole other word for the food pets eat. It’s just not the same as human food – we humans are way fussier.” This was news to me, under pressure as I am every day to rustle up at least three innovative meals for my cats. I wondered again where I went wrong with my cat-rearing. But seemingly I haven’t gone wrong because when the unnamed protagonist’s cat Cabbage begins to speak halfway through the novel, he reveals he doesn’t like this food either.

Cabbage’s voice is a little clichéd; he speaks “like an upper class gentleman . . . in a period TV drama”. It’s hard to know what part translation has played here as it is always harder to translate a demotic voice from one language to another. But the devil is in the detail and the devil is, of course, central to this story of mortality, a blend of Faust with It’s a Wonderful Life.

There weren’t many surprises for this cat lover but it was lovely to find out eventually that that “whole other word” is “Neko-Manma”. It is when Kawamura uses specific details or tells us that the origin of the Japanese word for cat, “neko”, is actually “’a sleeping child’” (same sound, different choice of kanji characters)” that the novel surges to life.

When the narrator, a young postman is diagnosed with an inoperable brain tumour and commences his bucket list, it isn’t long before the devil appears in the form of a doppelganger. In contrast to our quiet narrator who wears a white shirt and dark trousers, the devil is an outgoing character called Aloha who wears a Hawaiian shirt. His bargain is suitably devilish; the postman can buy an extra day of life each time he allows the devil to make something disappear. The fiendish part of the bargain is that devil chooses. Chocolate is considered first but when the devil develops a taste for it himself, they eventually settle on phones and this is where Kawamura becomes interesting:

“As . . . years go by, phones will cease to exist completely. Like pebbles on the roadside, they will start by going unnoticed – until they disappear completely . . . the 107 people who met Aloha before me must have made something disappear, but the rest of us haven’t noticed. It’s as if without you realising it, things you use in your everyday life, like your favorite coffee cup or the new socks you just bought, could disappear. And if you did realise, however much you looked for them, you wouldn’t be able to find them. For all we know, there may be all kinds of things that have already disappeared without our having noticed it, things that we’d assumed would always be around.”

The recipient of his last phone call is his first girlfriend who works and lives in a movie theatre. When the girlfriend turns up, she has a list too – of all his failings as a boyfriend. It seems an unspeakably cruel greeting for a dying man but there is a satisfying explanation which shows just how forgetful humans can be. The story of their relationship, which worked best when they were on the phone, is touchingly realised.

But if the disappearance of the phone was difficult for our character to bear, the next item on the list is even harder: Aloha suggests movies and this is where the details catch fire because this character (and no doubt his creator) adores the movies. He explores a rich catalogue before eventually settling on Chaplin’s Limelight for his final viewing.

This novel is haunted by movies all the way through, not just It’s a Wonderful Life with its flashbacks and life-appreciating lessons. There is something of Ozu’s great and touching Tokyo Story here too. Ultimately the postman has to learn to appreciate both his parents although it is the son that will die before his father here. Tokyo Story was influenced in its turn by Leo McCarey’s Make Way for Tomorrow and there is a strong sense of that cross-pollination so typical of Japanese film in this tale with its Hawaiian shirted-devil and litany of quotes from Hollywood movies and directors. Chaplin’s is perhaps the closest to the novel’s intention with its mixture of humour and life lessons: “Life is a tragedy when seen in close-up, but a comedy in long-shot.”

Martina Evans is a poet and novelist. Her latest book Now We Can Talk Openly About Men is published by Carcanet